by Natalie Ghidotti
Article sent successfully!
We were unable to send the article.

The city of Little Rock gained a lot of attention last week for its announcement that it was working on a bid to be Amazon’s second headquarters. Unfortunately, a lot of what I read on social media and in some news reports was a glass-half-empty mentality. That’s a shame because, based on my experience as a smaller company routinely competing with the big guys, putting yourself out there and reaching for the gold can pay off.

I’m not so bold as to believe that Little Rock will be a top contender for Amazon, even though we are certainly worthy of consideration. It’s only because Amazon was very specific about the needs for its next location — things we don’t have right now. But I get Mayor Mark Stodola’s reasoning. Dreaming big is important. Putting together answers and responses to these questions that large corporations want to know about their future homes is important. The naysayers to the city’s announcement need to remember that practice makes perfect.

As a small business owner in a competitive industry, I can tell you that going for the big stuff is a good thing. In the past year, my firm has fought hard against well-connected and well-heeled competitors for large contracts. (Two of our proposals made headlines in this publication.) We knew winning either was a long shot, but we came in second twice, and we were satisfied with that. Were we happy with second? Not at all! But when it comes to a stretch goal like that, second place is still great.

Those large RFP responses take tons of time and resources for a small team, but what you learn through the process is worth it. Going for the Amazon gold is another kind of stretch goal for the city of Little Rock, but think of the things we’ll know the next time a big company comes calling. The city can use this response to pull together their story and document what might need to be improved for the next big RFP, such as better funding the local transit system and expanding Clinton National Airport.

Little Rock is a fabulous city with a lot to give a large corporation. But neither Little Rock nor the state will ever grow and prosper if we don’t take chances. Thankfully, we have a few big thinkers in our state that are ready and willing to meet the challenge.

One of the Amazon requirements is a city with an international airport. We don’t have one yet, but Jim Dailey, chairman of the Little Rock Municipal Airport Commission and former mayor of Little Rock, said it well to KATV: “If that’s what it takes for us to be able to compete, then I can assure you the Little Rock airport is ready to step up to the plate.”

Northwest Arkansas entrepreneur and Engine CEO John James has written elsewhere of his vision for Arkansas becoming an e-commerce hub. While Wal-Mart may not want its biggest competitor in its own backyard, James advocates for a really good idea. Building an e-commerce center of excellence in Arkansas is very doable with our combination of retail (Wal-Mart, Dillard’s and growing companies like Lauren James Enterprises), logistics (Wal-Mart, J.B. Hunt and others) and data (Acxiom and PrivacyStar). This doesn’t even include the amazing growth of start-ups in the state focused on various aspects of ecommerce.

It may not be Amazon that comes here, but going through this RFP exercise and practicing how best to attract e-commerce companies could lead to long-term economic dividends for Arkansas. Companies like Amazon are looking for hotbeds of entrepreneurship laser-focused on the digital economy, and there is no shortage of that here in Little Rock and northwest Arkansas.

Attracting an Amazon is going to take people like Dailey and James — leaders, visionaries, hard workers and, most importantly, people with optimism and hope. We need more people like them and fewer people who dismiss the idea of dreaming big.

We should encourage our leaders to set stretch goals, change and compete. As a business owner who has done all of those, I can tell you that leads to growth and a happy team. People want to be part of something exciting, fun, challenging and growing. If it’s not Amazon that sees that this time, others will, and we’ll all benefit from visionary leaders willing to step out of the comfort zone. 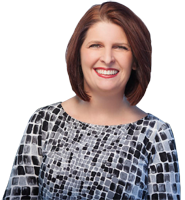 Natalie Ghidotti is CEO of Ghidotti Communications, a marketing/PR agency in Little Rock.