LaTonya Cockrell is one of Michael Moore’s favorite success stories.

The success, of course, is Cockrell’s, but Moore loves what her story illustrates about the power of online learning. Moore is chief academic and operating officer at eVersity, the University of Arkansas System’s online-only university, and loves to show how the availability of online education can change lives.

Cockrell, 43, was working as a server at the Winthrop Rockefeller Institute atop Petit Jean Mountain in Morrilton when she decided she wanted to go back to college and earn a degree. Her options were limited; she had two young children at home, limited resources and no desire to sit in a classroom for hours when she could be working or raising her son and daughter.

“The whole campus thing wasn’t going to work for me,” Cockrell said. “I’m a single mother and was working a full-time job.”

Cockrell mentioned her college dream to Chris O’Cain, who manages the IT department at the Rockefeller Institute. O’Cain told her to check out eVersity, and Cockrell realized she could manage the tuition and the time demands.

Cockrell, who had attended college in the early 1990s, earned an associate’s degree and will graduate with a bachelor’s degree in information technology in December. She won’t be job hunting, though, because the institute hired her in February as an IT associate to help run its myriad conferences and symposiums.

“Man, it’s like I’m filled with joy,” Cockrell said. “In IT, if you don’t have any experience, it is hard to get that first job. It has been a real successful ride. It was hard; it hasn’t been easy peasy. I worked my behind off.” 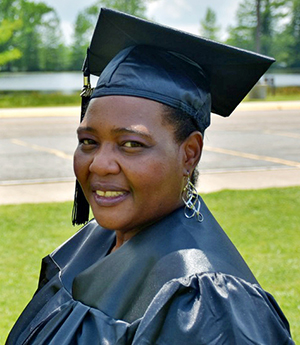 When Moore told Cockrell’s story, he was unaware she had already been hired full time. The Winthrop Rockefeller Institute had created an internship for Cockrell while she worked as a server and went to school.

“Imagine what that does for her pride, her income-earning capacity, the support she can give her family and children,” Moore said. “This is why we’re doing this.”

Moore said eVersity’s numbers are unusual because it has seven terms compared to fall and spring terms for conventional enrollment; eVersity’s enrollment has generally increased approximately 10 percent from term to term. The numbers fluctuate because many students take a couple of classes then sit out for awhile because of job or family requirements.

Moore said more than 500 students are taking the school’s free orientation class, and another 400 or more are enrolled in the fee-based program classes. Forty are expected to graduate later this month.

Moore expects better things ahead since eVersity recently earned accreditation from the U.S. Department of Education, allowing the university to join SARA, the State Authorization Reciprocity Agreement. Being a SARA school allows eVersity to recruit and attract online students from other states that participate, excluding California, the only state not to join SARA. “The best days are in front of us,” Moore said.

Other state universities that offer online degrees have seen growth. Thilla Sivakumaran, the executive director for global initiatives at Arkansas State University in Jonesboro, said the number of students taking online classes has more than doubled from 2,400 to nearly 5,000 since 2014.

He expects nearly 700 online students to graduate this spring. ASU has expanded its online offerings from two undergraduate degree programs to 10.

“We are definitely surpassing our goals,” Sivakumaran said. “We have launched a lot of programs since 2014. The growth has been more than we expected, but it has been great.”

Director of Online Learning Michael Judge said the University of Central Arkansas in Conway has nearly 900 undergraduate and graduate online students for UCA Online, which started in 2015. The university has also been able to lower tuition fees for its classes, Judge said.

“We’re growing; we launched with three undergraduate completion degrees and we’ve added two more,” Judge said. “We’re going to be adding a general studies completion degree in the fall. That will allow a lot of students in Arkansas to come back and get a bachelor’s degree.

“Students, nowadays, are demanding online courses, even the on-campus students, because it gives them the flexibility to still work and do other things. It makes a difference for these students.”

Get the Lists -
Education in Arkansas

One thing each of the three online university officials quickly and plainly agree on is the fact that their target student is not the recent high school graduate. Most online students targeted and served are older, have families and have taken college courses in the past. LaTonya Cockrell, the soon-to-graduate eVersity student, is an archetype.

“They’re adult learners,” Sivakumaran said. “They started school at some point and then have come back. We actually surveyed students within a 50-mile radius who are undergraduate students. They basically said, ‘I have a full-time job and if you didn’t offer an online program, I would find another institution that had an online program.’ ”

Sivakumaran said one thing ASU does to help these busy, older students is streamline the acceptance and advising process. Sivakumaran said once a student is accepted into the online program, he or she will have an advising session with a member of the school’s faculty within three days.

Moore said that is the idea behind eVersity’s opening class, which is required of all its students. The orientation class is free and gives students, some of whom haven’t taken a class for a grade in decades, a chance to dip their toes back into university waters.

“It gives us a chance to do some work with them on what it is like to be an online student,” Moore said. “How to prepare a budget, how to apply for financial aid, to work with employers [and] advisers, what’s the best degree program for their needs.”

Moore said studies have shown that eVersity students have earned a grade-point average nearly one full letter grade better than the grades they earned in their previous college experiences.

The growing acceptance of online courses by brick-and-mortar faculty, and their willingness to teach them, is also contributing to the success of online programs. ASU and UCA Online have instruction designers work with faculty to design the curriculum and interaction.

“More and more universities are getting instruction designers that understand how to develop and design online courses to work with faculty,” Judge said. “You will always have faculty that was left at the bus station, but a vast majority of faculty have started teaching online and have seen the level of quality. That’s what they are always worried about: Can we deliver the same level of quality online that we can face to face? They are finding out that the answer is yes.”