Help Wanted, Desperately, Behind the Wheel

Rising diesel prices? Government regulations? Competition with the big boys? Sweep those worries aside, trucking industry veteran Garland E. “Butch” Rice says. The biggest challenge facing small-to-medium carriers today is as basic as it gets: “If you don’t have a driver, you don’t have a trucking company.”

Rice, the president and CEO of Stallion Transportation Group of Beebe, has been preaching about the driver shortage for years. But it’s growing worse, he says, so his company is raising pay, offering more time off and picking up 70 percent of drivers’ health insurance premiums in a costly effort to populate the cabs of his 72 big rigs.

He’s even ready to explore training recent high school graduates to drive, though he concedes the public might cringe at the thought of a teenager steering 80,000 pounds of metal and freight.

“When Arkansas has an unemployment rate of 3.2 percent, that doesn’t make finding drivers easier,” Rice told Arkansas Business. “We’ve increased our driver pay three times in the last 18 months, and we run all new equipment, so drivers know they’ll be operating the best.”

He said his company, which competes with major carriers like J.B. Hunt, PAM Transport and USA Truck Inc. for Arkansas employees, pays about 47 cents per mile, up from 33 cents or so 10 years ago. If you multiply today’s rate by 2,000 miles a week, a conservative estimate, the pay comes close to $50,000 a year. And many drivers top 2,500 miles weekly.

“We’ve been having three or four trucks empty over the last six months, and it’s absolutely costing us money,” said Rice, who started in the industry at 13, sweeping up trucking shops in North Little Rock. He founded Stallion in 1992. “For us, every truck sitting amounts to $6,100 a week in lost gross revenue, so if you calculate five trucks sitting, that’s $30,000.”

That’s a real burden for a small business (some 100 employees, including contract drivers) with $40 million or so in annual revenue. “You can see why this is our No. 1 priority,” Rice said. “It used to be you’d get a customer and you’re in business. Now it’s get a driver, then get some business.”

Chuck Mitchell, president of MC Express in Jonesboro, said smaller carriers have to follow the salary lead of bigger competitors. “The driver shortage is the biggest test right now,” he said, noting that he’s about 10 drivers short of filling the cabs of his 100-rig fleet. “Hiring and retaining good drivers is just hard, and I’m not sure money’s the answer because a small carrier can’t set the standard.”

Shift to Regular Pay
The driver crunch, compounded by an aging trucker population — Mitchell said the average age is 59 — has spurred innovation. Beyond efforts to lower the minimum driver age, companies like Zero Mountain Logistics of Lowell are shifting away from mile-based pay, the industry standard, to regular wages for drivers of its 60 refrigerated trucks. “We’ve found our guys really enjoy that, knowing they won’t have to worry about not paying the bills this week because they took a day off and didn’t get the miles,” said Brandon Clifford, Zero Mountain’s business development chief. “And it allows us to take multi-stop loads that require a driver to stay in Dallas an extra day to get it unloaded, because the driver is getting flat pay and is fine with that.”

The current economic surge and a revival in the industrial sector have helped the trucking business adjust, Rice said, but the same factors also complicate hiring drivers.

“The internet made it possible for people to go into business for themselves, so now a lot of drivers are on their own, some even driving for Uber,” Rice said with his trademark laugh. “We have to compete with the publicly held companies for customers, and we have to compete now for that driver.”

The e-commerce boom has helped trucking as well, but it, too, brings pressure. “Carriers are picking up products from distribution centers like Amazon’s, so internet buying has had a major impact on shipping,” Rice said. On the flip side, customers demand next-day shipping. “Whoever would have thought carriers would do home deliveries? A washer and dryer from Sears used to be two weeks out; now they’re there a day or two later, and it’s a carrier that’s delivering it, not an installer from Sears.”

More Freight Than Ever
Rice, Clifford and Mitchell, who said MC pays its drivers 48 to 50 cents per mile between taxable income and per-diem, all agreed that rising freight volume is subsidizing driver paychecks. “With this amount of freight, it’s more of a carrier’s market,” Rice said, occasionally calling out to colleagues at Stallion’s 18,000-SF headquarters in Beebe to help him with specific facts and figures.

“With the freight rates going in the right direction, that’s certainly helpful,” Clifford said, explaining that Zero Mountain Logistics was started four years ago to serve customers of its parent company, Zero Mountain Inc., a Fort Smith cold-storage warehouse enterprise born in 1955 in a limestone cave in Johnson.

“More drivers are hanging up the keys than we have new ones starting,” Clifford said. Today’s young Americans “would rather go to college and come out a quarter-million dollars in debt rather than getting a trade position where you can make 65 or 75 grand a year. The biggest thing we’ve got to do as an industry is to change the perspective of how people view truck drivers.”

The job market and work ethic were far different when Rice founded Stallion in 1992, he said. “This generation wants everything faster, including advancement, and they want high-tech jobs and personal time.

“It was expected 20 years ago for a driver to be out four or six weeks at a time,” Rice said. “Today our drivers are home every weekend, and we’ve changed our traffic lanes and operations to make sure of that.”

Mitchell and Clifford said fuel prices are always something to watch for midsize carriers, but pricing structures allow them to cope as long as increases are gradual. 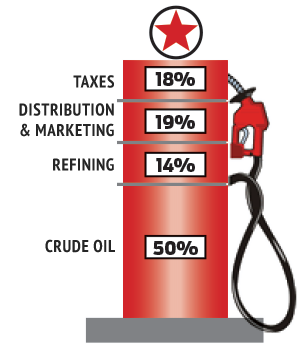 An average gallon of diesel in the Midwest a year ago was about $2.50, according to the U.S. Energy Information Administration. Now that gallon costs $3.09, so filling up twin 150-gallon tanks on an 18-wheeler costs carriers an additional $177.

“We bill a surcharge, so as long as it’s an easy incline, prices are no great problem,” Mitchell said. “Back in 2010 or 2011, when the economy went to crap and fuel prices really took off, we couldn’t collect fast enough. If your bill is jumping every week by tens of thousands of dollars, it hits your cash flow real hard. But right now, prices are easing up little by little.”

Clifford said every expense nags at what is essentially “a penny business,” but he’s not overly worried about fuel costs “because if we’re pricing things correctly, we’ve got a matrix in place to account for that.”

Complying with Federal Motor Carrier Safety Administration rules requiring fleets to have electronic logging devices to keep track of drivers’ hours has also added expenses. “We went to ELDs three years ago, and to date it has cost about $1.2 million in hardware and in software subscriptions,” Rice said. “It’s made a huge impact, one that I believe has been needed. Nobody’s driving when they shouldn’t be, and there’s no more driving 4,000 miles a week. Computerization means there’s no errors, but it does come with a cost.”

While Mitchell backs ELD, he says enforcement of the Department of Transportation rules allowing drivers to be on duty for 11 hours in a 14-hour stretch sometimes defy common sense. He offered an example of a driver dropping off freight at 6:30 a.m. “That’s when your 14-hour clock starts, but if you sit at the dock for five hours waiting to get unloaded, you’re already down to nine hours out of your 14, so you can’t get in your 11 hours. Once you start making pickups and deliveries, it’s down to seven or eight hours a day that guys can drive.”

How Old Is Too Young?
Rice questions federal requirements that commercial interstate drivers be at least 21 and envisions high school graduates being paired with experienced drivers for training. “Take a high school graduate,” he said. “I don’t even get a glimpse of him till he’s 23 or 24, and by then he’s had two or three other jobs. There’s legislation now that would let drivers get into training where they can graduate to being a driver at 20. That would be huge. We could have older guys training the younger guys.”

The American Trucking Associations’ chief economist, Bob Costello, said that keeping trucking off limits to potential drivers coming out of high school turns them toward construction work, manufacturing or other industries that don’t require college.

“I really love Butch’s idea for training younger drivers,” Clifford said. “Of course he has a different size fleet and could spare older drivers to ride with trainees. I won’t say I’d want to see 18-year-olds out alone driving an 80,000-pound missile down the road, but I wouldn’t mind that teenager being with a trainer for a couple of years.”

Mitchell said safety is the highest priority. “Most trucking companies are geared for safety for the simple fact of the way our nation is. It’s a sue-happy nation, so the last thing we want is to be involved in an accident.”

Both Rice and Mitchell said driverless rigs piloted by technology aren’t likely to hit the roadways anytime soon, though Rice said a push for “autonomous” technology might bear fruit. “Autonomous systems still have a driver in the truck,” though sensors around the truck keep it on course. “Public perception would be the biggest hurdle, but even the discussion is a sign of an industry being pushed hard.”

Asked in an email follow-up whether driverless trucks are on the horizon, Mitchell replied succinctly: “I sure hope not!!!!”