The Red Wolf Convention Center at Arkansas State University will join the list of convention centers in Arkansas next summer.

The $58 million project is expected to open in July or August and will feature a 203-room Embassy Suites by Hilton. O’Reilly Hospitality Management of Springfield, Missouri, is the developer and will operate the project.

Meanwhile, other convention center operators in Arkansas say they are constantly making improvements to meet the needs of attendees.

“You have to keep up with technology,” Arrison said. “Over the years, we’ve probably spent about $500,000 on bandwidth.”

High-definition projectors also are in demand, he said. “You remember the days when people would come and they’d have an overhead projector?” Arrison said. “Now they’ve got a computer that has an HD signal for their presentation, so you have to have an HD projector.”

Another amenity event planners seek is flexibility with the layouts of their meeting rooms, said Melissa Holland, general manager of the Holiday Inn Arkansas Convention Center in Texarkana. Some groups want large, general session rooms and then request smaller rooms for smaller sessions with attendees, she said. “They may require three or four different setups in one day at different times,” Holland said.

Conferences for millennials, however, are looking for open gathering spaces or outdoor areas to meet, said Gretchen Hall, president and CEO of the Little Rock Convention & Visitors Bureau.

Another key part of planning is addressing attendees’ dietary needs, which could include having gluten-free, vegan, vegetarian and dairy-free items on the menu. Food allergies also have to be taken into consideration, as well as religious catering that might include kosher and halal selections, Larry Cooper, general manager of the John Q. Hammons Convention Center in Rogers, said in an email to Arkansas Business.

“Culinary is an art form, and we are continually crafting new recipes and offering new menu options,” Cooper said. “We cater to a global audience in Rogers.” Hall said event planners seek out convenience for their attendees. “They want all of their hotel rooms either connected or very close to the meeting facilities,” she said.

Once the attendees check into the hotel, they want to be able to walk to restaurants, shopping centers or a museum.

City Connections
Convention centers work with their cities to promote events or land conventions. The Fort Smith Convention Center had a number of events this year tied to the city’s celebration of its bicentennial.

“We’ve had a number of conferences come and use that theme … . One of them was the Arkansas Municipal League,” said Claude Legris, executive director of the Fort Smith A&P Commission. The Arkansas Historical Association also held its yearly conference in Fort Smith because of the bicentennial, he said.

In addition, the September 2019 opening of the $50 million United States Marshals Museum in Fort Smith is expected to boost business for the convention center. The U.S. Marshals Service Association will hold its annual national convention in Fort Smith because of the opening, Legris said. It will bring about 185 overnight attendees, he said.

The Pine Bluff Convention Center is leaning on city officials for another reason. It wants help in cleaning up or closing the Plaza Hotel & Suites, which is attached to the convention center.

Get the List
The list of the Largest Chambers of Commerce in Arkansas is available for purchase. See more on our Lists page.

Several Pine Bluff agencies inspected the hotel on Aug. 1 and found fire and safety violations, according to a report by the assistant city fire marshal. The hotel operator, Mike Patel, was given 30 days to fix problems. A person who answered the phone at the hotel last week refused to take a message for the general manager.

Joseph McCorvey, executive director of the Pine Bluff Convention Center, said he’s still booking events. In October, the Christian rock band Newsboys will perform. And at the end of the year, King Cotton, the basketball tournament, will fill the center’s arena. Four Arkansas high schools and four from out of state will compete in the tournament’s Pine Bluff stop in more than a decade.

Bentonville is also considering a convention center after a study about four years ago showed the city could one, said Kalene Griffith, president and CEO of Visit Bentonville. But there hasn’t been any movement on the project, which along with a hotel would cost about $150 million.

“We’re still interested,” Griffith said. “It would have to be a private developer to develop it. We don’t have the dollars to develop that.” 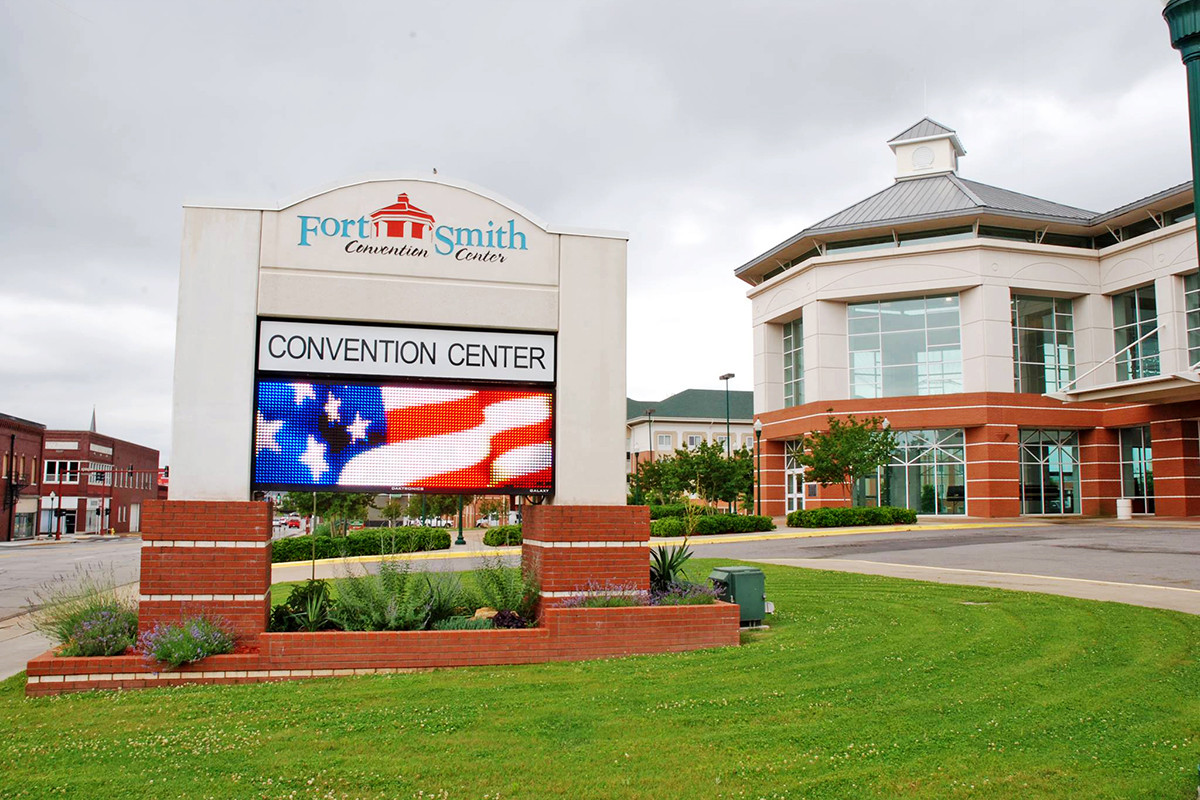 The Fort Smith Convention Center reported $788,712 in revenue in 2017, an increase of 1.43 percent from the previous year. It’s the fourth straight year of record revenue at the 116,800-SF convention center, which features a 1,300-seat theater, said Claude Legris, executive director of the Fort Smith A&P Commission. Through June 30, the convention center had $370,333 in revenue, which is more than it had generated at midyear in 2017, Legris said. However, the number of events held in 2017 — 248 — was a decrease of 7 percent from 2016. A 252-room DoubleTree by Hilton is attached to the convention center. Among the larger events in 2017 and 2018 were the meetings of the Christian Congregation of Jehovah’s Witnesses, which 28,000 people attended over four weekends. In 2017, the Hispanic Catholic Charismatic Renewal gathering drew 4,200 people. The Arkansas Bandmasters Association Convention had 1,800 people attend this year. 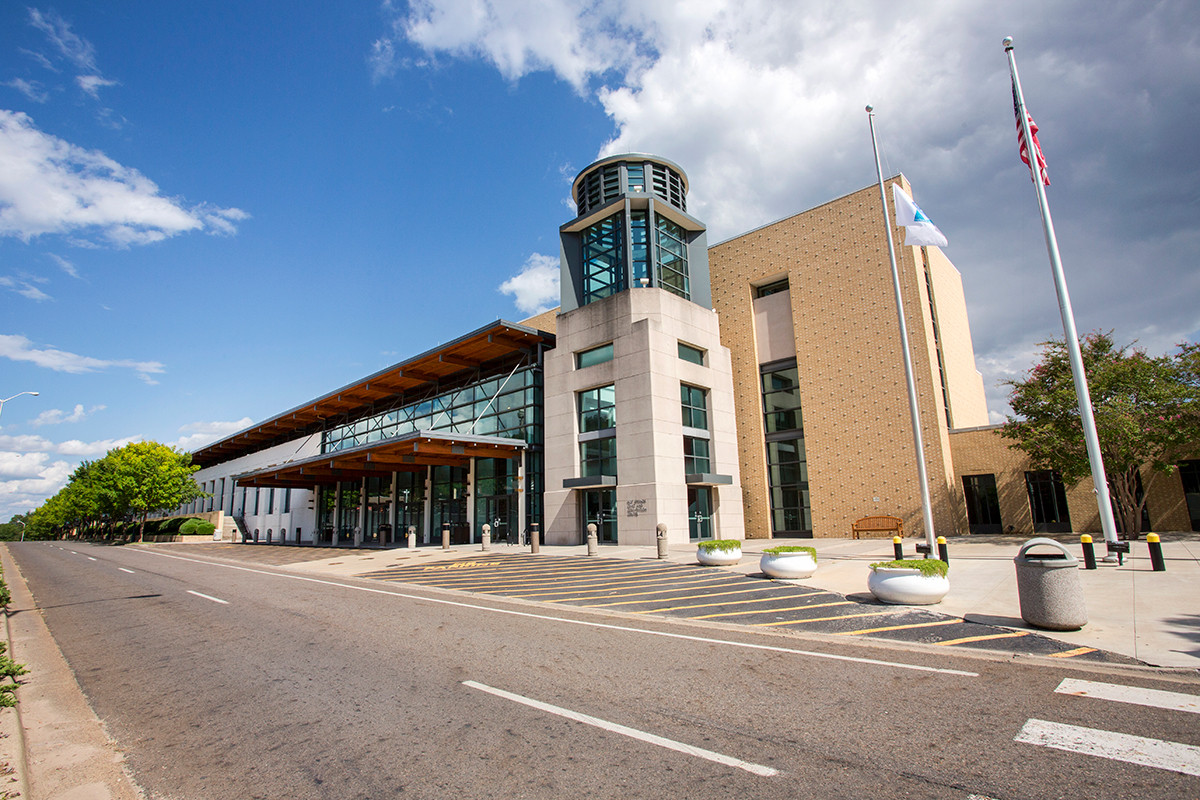 (Photo by Karen E. Segrave)
The Hot Springs Convention Center reported revenue of $2.3 million in 2017, a decline of 19.5 percent from the previous year. The 360,000-SF center hosted 270 events in 2017, which was down from 297 the previous year. Through June 30, the convention center had 156 events and revenue of $1.5 million, according to Steve Arrison, CEO of Visit Hot Springs. He said the number of events at the convention center “ebbs and flows.” A large draw this year was the FLW Cup Championship Fishing Tournament, he said. It’s returning to the convention center in 2019, making it the first time it’s returning to the same venue two years in a row, Arrison said. He said recent improvements to the convention center include replacing its sound system for $1 million and a $1.2 million lighting project that included adding LED lighting. 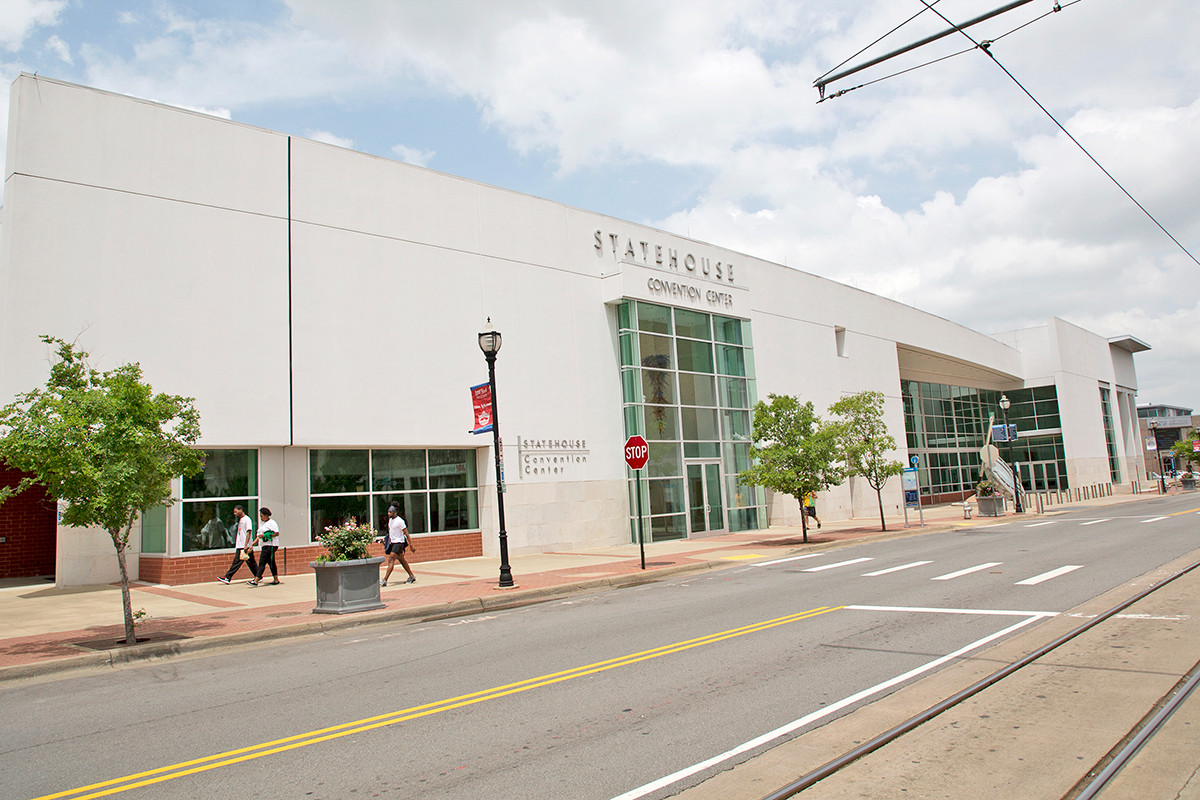 (Photo by Angelo Felix)
The Statehouse Convention Center saw its revenue rise 4.6 percent in 2017 to $1.9 million. The 240,000-SF center hosted 172 events, down 6 percent from the previous year. Through the first six months of this year, the convention center has held 74 events. Some of the largest events in 2017 were the ATA World Expo, which drew about 5,000 competitors and family members, Gretchen Hall, president and CEO of the Little Rock Convention & Visitors Bureau, said in an email. The Little Rock Marathon, for which 14,000 people registered, was a top event for the center in 2017 and 2018. The center is undergoing a $296,000 renovation that will add 3,500 SF of meeting space. The project is expected to be completed around the first of November. 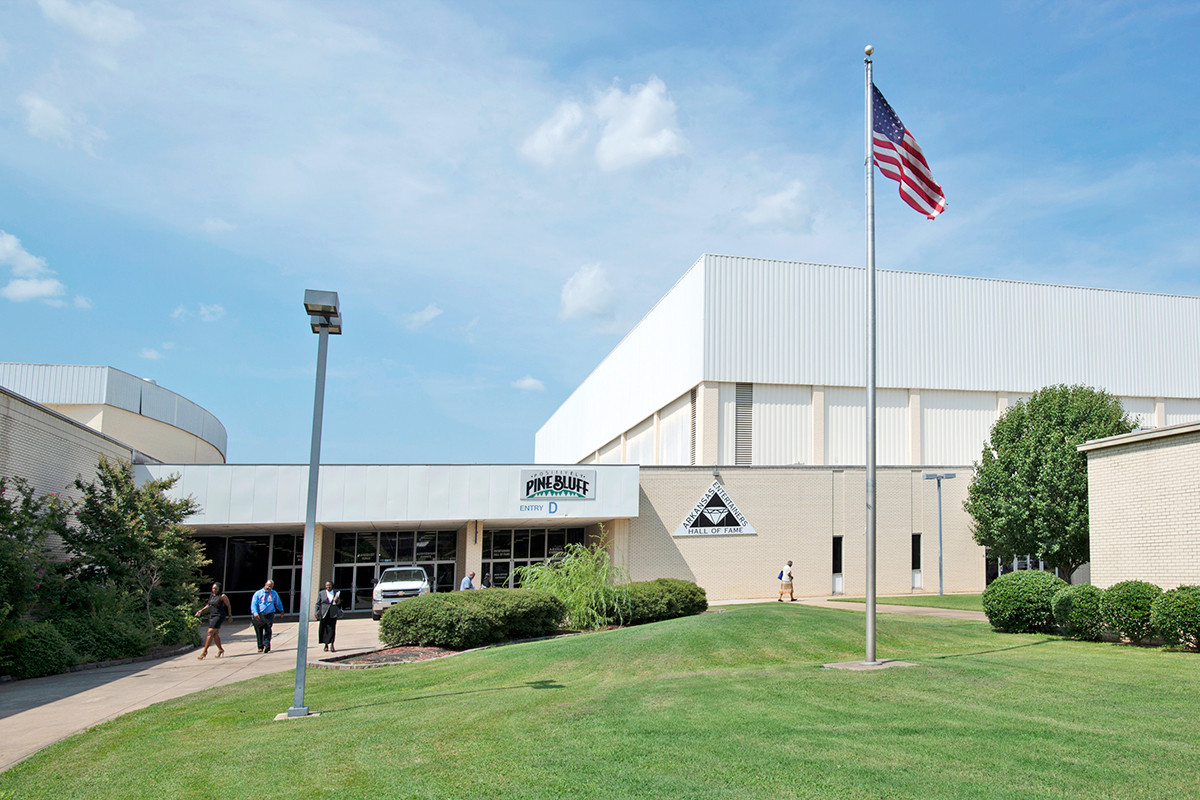 (Photo by Jason Burt)
Joseph McCorvey has been trying to improve the 100,000-SF Pine Bluff Convention Center since he started as its executive director on Jan. 1. He blames the poor condition of the attached Plaza Hotel & Suites as a reason for the struggles of the convention center, which also has a 6,000-seat arena. Pine Bluff’s code enforcement director, Evelyn Horton, said that a recent inspection of the hotel found it “not real healthy.” Inspectors noted a toilet on the second floor had overflowed and water flowed to the first floor. A light fixture was “all wet” and an elevator wasn’t working, Horton said. “All of the suites were junked up with supplies; nothing was clean,” Horton said. “It needs to be taken care of ASAP.” A person who answered the phone at the hotel last week wouldn’t comment on the inspection and refused to take a message for the general manager. 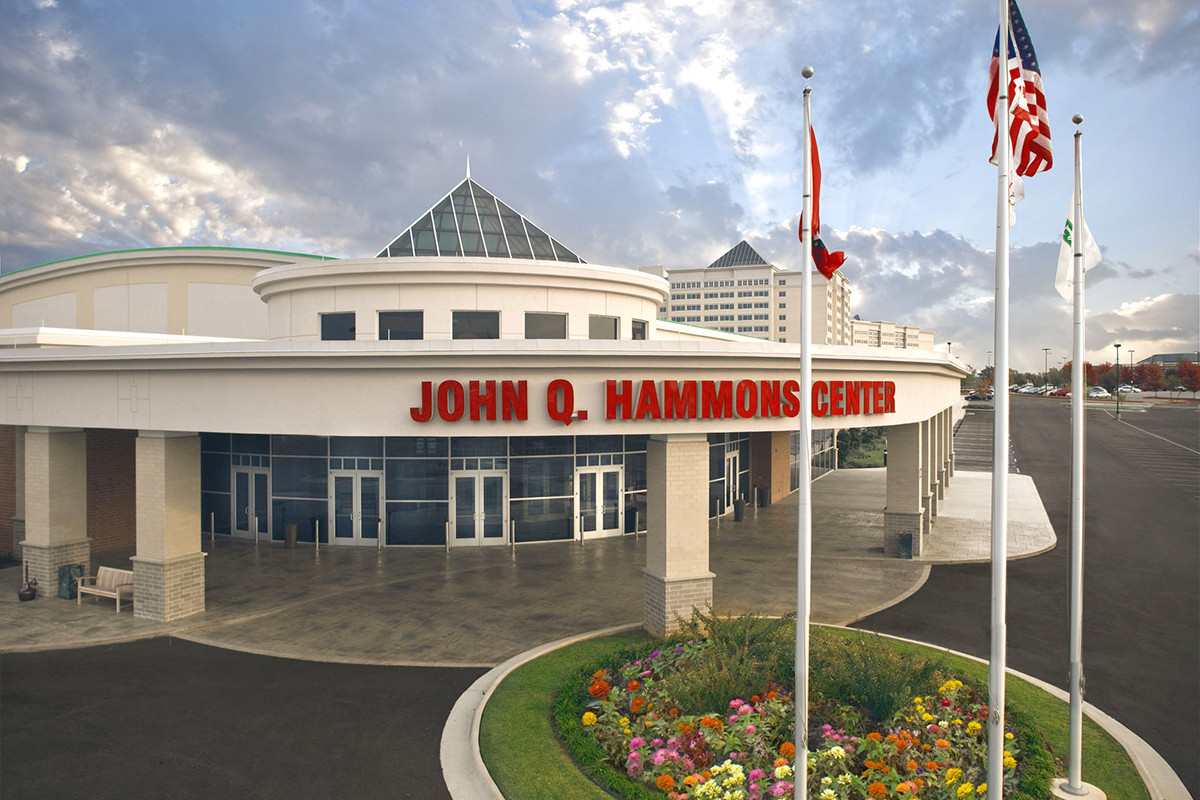 The John Q. Hammons Convention Center and connecting 400-room Embassy Suites by Hilton Northwest Arkansas features 125,000 SF of event space, making it the largest such venue in northwest Arkansas, said J.R. Shaw, executive director of Visit Rogers. The convention center is owned by Atrium Hospitality of Alpharetta, Georgia, which declined to reveal convention center revenue or the number of events it hosted in the last two years. Shaw said one of the larger events is the annual Poultry Federation meeting in June, attended by about 6,000 people. In addition, the Daisy National BB Gun Championship Match is held at the convention center and draws people from around the country, Shaw said. The convention center is a “huge economic development driver because attendees spend money in the hotel, but they also spend money in the community as well.” 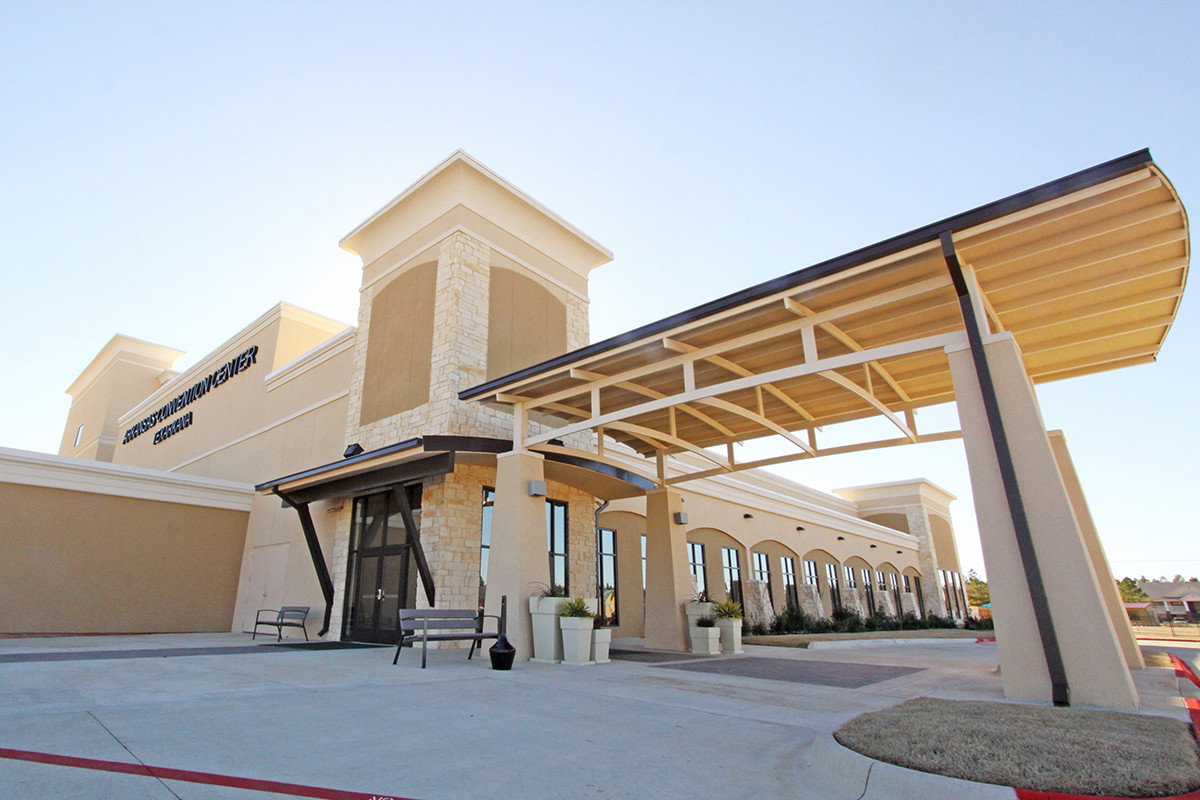