Ask what’s new in shopping malls, and you’ll hear of a trend that isn’t in the mall at all. It’s on the parking lot outside.

Companies like Dillard’s Inc., J.C. Penney and Macy’s are surveying their vast parking areas and seeing new opportunities for dining and entertainment venues.

North Little Rock’s McCain Mall is a prime example as companies realize they can reap revenue from unused space while luring in diners to create retail momentum, developers say.

Both new restaurants are expected to open this year.

“Most of those big mall parking fields were just too big even in the heyday of driving to the mall,” said Josh Brown of Haag Brown Commercial Real Estate & Development in Jonesboro, which handled the lease deal with Dillard’s for a 4,000-SF Tacos 4 Life. That project is under construction at 4211 Warden Road.

“Two, you’ve got companies like Dillard’s that want to provide customer energy out there in their parking lots.”

The key idea, Brown said, is that Dillard’s customers “look a lot like customers of Tacos 4 Life,” a Conway chain whose 12 locations pay part of their revenue forward to fight childhood hunger.

Next door, a new 5,000-SF location is being built by Purple Cow, the Little Rock burger-and-milkshake chain. In both projects, the land is leased from Dillard’s but the eateries will own the buildings.

“Big box retailers are using this type of development to create more of an experience for shoppers,” said Ken Vaughan, president of Purple Cow, which will have five outlets after the $2 million McCain site opens. “They’re making the mall more than a shopping site, more a destination to shop, dine and play. So there’s the benefit of leasing out some parking, but the bigger reason is to enhance customers’ overall experience.”

Brown, whose firm has been working on deals for former parking space owned by Dillard’s, Penney’s and even a few Target locations nationwide, said he expects “to see this trend continue.”

‘Massive’ Lots Not Needed
Beyond lease revenue and retail traffic, Brown notes another financial consideration for mall businesses. “There are common-area costs associated with being mall tenants,” Brown said. “If you add a restaurant on an outparcel, typically you’re bringing another company in to assist in paying for those operating costs,” which he said include maintenance, landscaping and security. “Every new company that you bring in lowers that a little bit for everyone.”

Macy’s Inc., a division of Federated Stores of Cincinnati, is seen as a leader in re-envisioning parking lots. Its leadership believes far fewer spots are needed in an age of online buying and falling property values at many shopping centers. Last year, the retailer settled on a plan to create new revenue streams from unused parking.

This year, it put William Lenehan, CEO of Four Corners Property Trust and a restaurant leasing whiz, on its board. In 2015, as a board member for Darden Restaurants — owner of Olive Garden, LongHorn Steakhouse and Cheddar’s Scratch Kitchen, among others — Lenehan helped engineer a sale-leaseback deal that spun off more than 400 Darden properties and formed Four Corners, a separate publicly traded firm.

Doug Sesler, Macy’s executive vice president for real estate, took up the parking lot trend in an investor-day talk. “We’re all talking about driverless cars; we’re talking about the increased used of Uber,” he said. “The fact of the matter is we don’t need the massive parking lots that we needed in the 1970s.”

Get The List
The Largest Commercial Property Management Firms - Ranked by gross square feet of office, retail and warehouse space managed. Available in either PDF or spreadsheet formats.

So it’s no shock that Darden is involved in a more traditional outparcel development on the McCain Boulevard side of McCain Mall. Seritage Growth Properties, a publicly traded real estate investment trust headquartered in New York, is turning the 21,000-SF former Sears Auto Center site into a LongHorn location.

Seritage is redeveloping a portfolio of 253 shopping-center properties in 49 states and Puerto Rico, its website says, an endeavor with more than 40 million SF of space.

Seritage didn’t immediately respond to requests for comment, but Simon Property Group of Indianapolis, the REIT that owns McCain Mall, said through McCain Mall Manager Lisa Meyer that it is thrilled with the new restaurant lineup.

“Purple Cow has been a local icon for many years, and we are excited to have them,” Meyer wrote in a statement to Arkansas Business. She praised Tacos 4 Life as another Arkansas company with tasty food and a special mission to fight global childhood hunger. (The company donates 22 cents to Feed My Starving Children for every taco, quesadilla, salad and rice bowl sold.)

LongHorn offers a varied menu and great lunch specials, Meyer said, predicting that the new restaurants will be “a savory treat for foodies.”

Still Hot After 45 Years
The restaurants themselves are hungry to get into an area that has been a hot retail spot since McCain Mall, which now has some 790,000 SF of retail floor space, opened near the U.S. 67-Interstate 40 interchange 45 years ago.

“The malls where these parking field projects are coming up typically are in areas of really good real estate,” said Brown, the Jonesboro real estate executive. “If you look at the top 10 performing restaurants in Little Rock, you see many of them dotted around this property, and that’s the same in other cities doing this.”

He said when malls were first developed, surrounding areas developed quickly, as a rule, leaving no space for restaurants and companies looking to break in. “It’s hard to do because nothing is available,” Brown said. “It’s my understanding that McCain Mall had only a couple of outparcels available. But we’re working these same types of transactions in multiple states on Dillard’s properties, J.C. Penney properties or in some instances Target outparcels.”

Vaughan, the Purple Cow president, expects the McCain site to do the most volume of its five locations.

“We feel it’s a dynamic restaurant market there in North Little Rock, and specifically around McCain Mall. We ex-pect a lot of economic velocity, and think consumers from all over the area will come. There are many restaurant options right there, but the market seems to support it.”

A Tale of Two Projects

Tacos 4 Life and the Purple Cow are building new restaurants on former parking lot space they are leasing from Dillard’s along Warden Road at McCain Mall in North Little Rock. The companies will lease the ground but own their own buildings. Here are some project specifics: 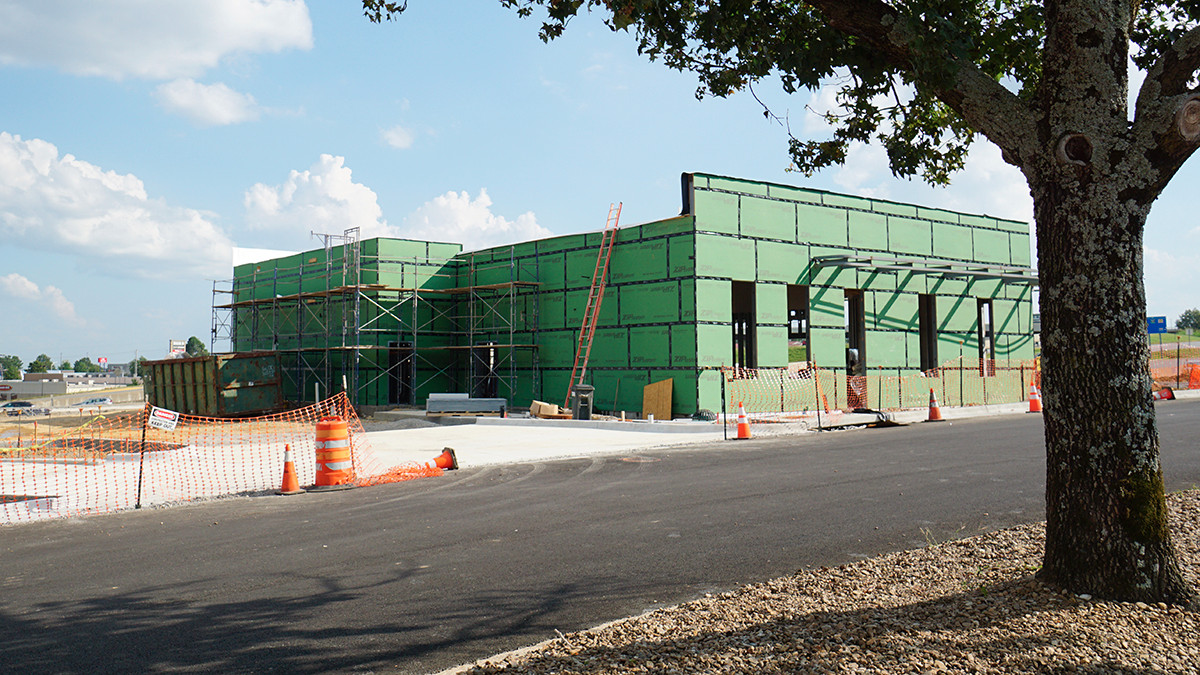 The Little Rock chain’s fifth location, expected to open by the end of the year, will cost approximately $2 million and cover about 5,000 SF. The project, designed by Polk Stanley Wilcox Architects of Little Rock, has Dave Grundfest Co. of Little Rock as its general contractor. 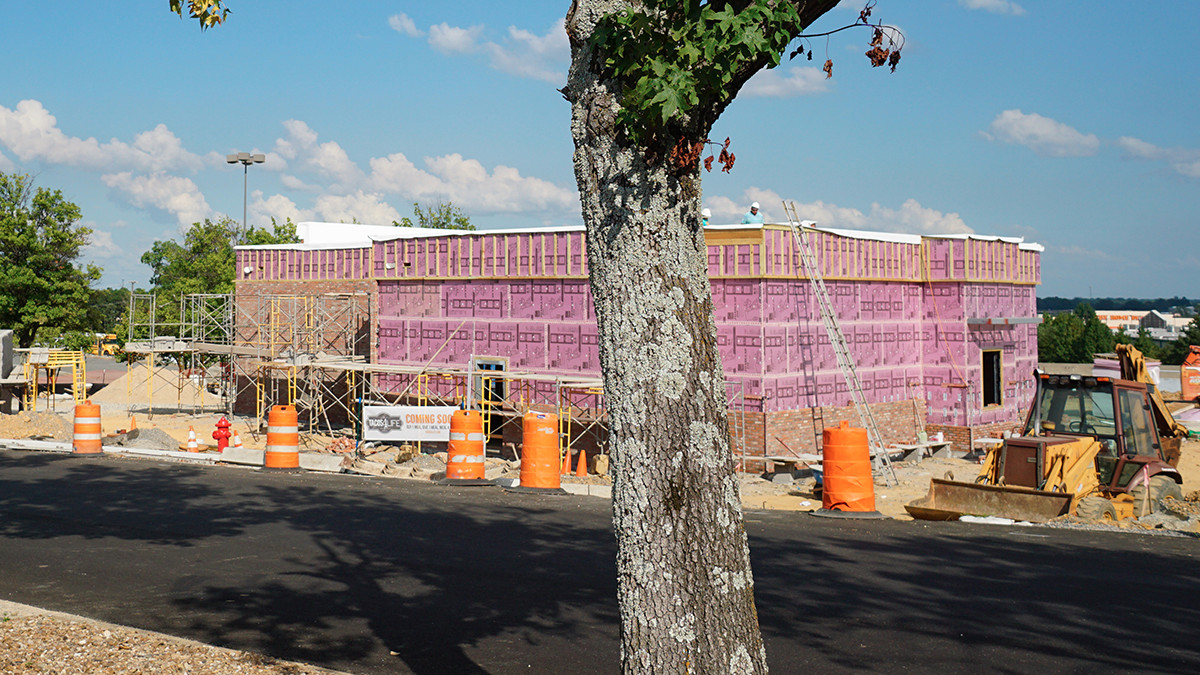 Based in Conway, Tacos 4 Life is adding to its 12 locations with its new site next door to Purple Cow, on the east side of the mall, near Dillard’s. The 4,000-SF restaurant, estimated by the company as a $2.5 million project, was designed by Harrison French & Associates of Bentonville. The general contractor is Progressive Constructors Inc. of Little Rock.

‘Best Restaurant Land’
Purple Cow, which has two Little Rock locations and restaurants in Conway and Hot Springs, has no other new sites underway, Vaughan said, but the chain is looking at potential sites in northwest Arkansas and in Benton or Bryant.

Tacos 4 Life Chief Operating Officer Marwan Yasin said the McCain property is one of four that the 12-location chain is developing, along with locations in Waxahachie and Texarkana, Texas, and Jackson, Tennessee. “The McCain Mall location is a bit of a cost outlier because it’s really a billboard site,” he said in a phone interview. “We feel blessed that Dillard’s is a fan of our brand and that they believe in our mission. Haag Brown helped us with the location, and it sort of all worked out.”

The company’s theme this year is helping Arkansas companies grow, he said.

“We’ll be doing more for Tacos 4 Life. We just opened a store in Fort Smith that’s done really well, and they opened stores in Rogers and in [Concord] North Carolina. These are generally more traditional outparcels or redevelopments of existing space, rather than space on an existing parking lot, but I’m sure there are others like that in our pipeline.”

A Company That Loves Its Land 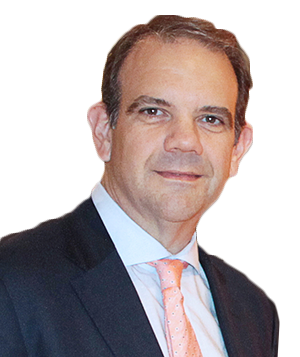 Though Dillard’s Inc. is in the forefront of turning parking space into new dining destinations at McCain Mall, unlike Sears and Macy’s it isn’t actively pursuing leasing outparcel space as a revenue source.

Chris Johnson, Dillard’s senior vice president and principal financial officer, emphasizes that his company still owns the land where Tacos 4 Life and Purple Cow are building restaurants. That’s in keeping with company philosophy: “We own roughly 90 percent of Dillard’s stores and land across the country,” Johnson told Arkansas Business.

“These deals come about when restaurants and others approach us about outparcels at different properties,” said Johnson, who declined to make public how much revenue the McCain leases will provide.
“That’s kind of when we look at these.”

Johnson does expect more restaurants to crop up inside and outside malls. “In the industry as a whole, nowadays a lot of people are spending more at restaurants, and you kind of go where the money’s going. You’re seeing a lot of activity in the restaurant space, and with entertainment.”

He pointed to McCain Mall. “At the Sears parcel, they’re putting a LongHorn Steakhouse at the old auto center, and BJ’s Brewhouse opened up on a property owned by Simon, which owns the mall. A Taziki [Taziki’s Mediterranean Cafe] went in not too long ago, so it’s an active space.”