After decades as a reporter, TV anchor and PR pro and professor, Amy Oliver Barnes managed to bury the lead.

She was discussing a new finding that public relations workers now outnumber reporters 6 to 1 when she dropped the bombshell: She’s retiring next year after a lifetime of storytelling and 12 years teaching PR at the University of Arkansas at Little Rock.

“At 66, it’s time to retire,” she told Arkansas Business in a lively, funny interview two weeks ago. “I’ll probably still teach one class a semester,” Barnes said. “But I want to travel, to get my husband out of the house more.”

Her husband, Steve Barnes, is himself one of Arkansas’ most versatile journalists — a TV reporter, syndicated newspaper columnist and former contributor to The New York Times, not to mention Amy’s co-anchor at KATV in Little Rock in the 1970s and ’80s when she blazed a trail as one of the state’s first female hard-news anchors. He now moderates “Arkansas Week” on the Arkansas Educational Television Network.

“Spring 2020 will be my last full-time semester teaching,” Amy said, “and I’m looking forward to doing something a little different, traveling and doing a little more volunteer work.”

No doubt she’ll stay busy. After graduating from Arkansas Tech University in 1975, her career was a study in perpetual motion. She reported, anchored and produced news at KATV from 1977-85 before jumping to Little Rock rival KARK in 1985. She was assistant news director there before joining AETN in 1990 as executive producer and operations manager. She went on to direct PR at Arkansas Children’s Hospital, then was UA-Little Rock’s director of communications from 1997 to 2006, when she shifted to teaching. Her master’s is from UA-Little Rock, and she was on the board of the Arkansas chapter of the Public Relations Society of America for seven years.

The long-term grind of the news business drove her out, she said, returning to the topic of PR jobs and the dearth of news positions in the internet age. The 6-1 ratio was in data from the U.S. Census Bureau, reported by Bloomberg with the headline “PR Jobs Boom as Buffett Sees Newspapers Dying.” Buffett, of course, is Omaha’s Warren Buffett, who until recently was bullish on newspapers. 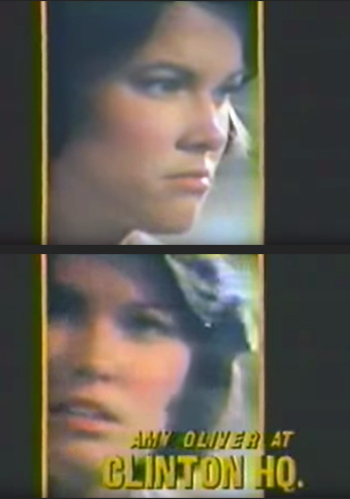 Amy Oliver Barnes appears in a KATV-TV "Election '78" promo from what would turn out to be Bill Clinton's first victory party as governor-elect.

Arkansas Democrat-Gazette Publisher Walter Hussman Jr., a Buffett admirer, has been shifting the state’s largest paper to digital distribution, and it may soon be printed only on Sunday, the paper’s only profitable day in print. The digital initiative hinges on readers keeping their $30-plus-a-month subscriptions in return for $800 iPads that Wehco Media Inc. has formatted for a digital edition. Hussman recently bought $12 million worth of the tablets. “The print model is not going to make it for newspapers. I don’t care what town you are in in America,” he said. Keeping 70 percent of subscribers under the digital plan would let the paper avoid cuts in its newsroom. Workers in production, printing and distribution won’t be so lucky.

The stress of years of journalism layoffs, compounded by “am I next?” doubts, takes a toll, as does the added work faced by newsroom survivors. All that can make a PR job offer look like a godsend.

“There are so many journalists like me who were just chewed up and spit out by the news business,” Barnes said. “They get exhausted, and they look for something less frantic than news.”

PR is the obvious choice, she said. “Journalists are the great storytellers, and they know how to communicate with the public, so it makes perfect sense. I wish we had more former journalists in PR.”

Barnes is almost certain to get that wish. Dylan McLemore, assistant professor of public relations at the University of Central Arkansas in Conway, says that shrinking newsrooms create an imbalance that’s “a problem for everyone — journalists, PR practitioners and the public.” The PR industry has made ethical strides “since the era of hucksters and spin doctors,” McLemore said.

“I find myself teaching PR students not only the ethics of their industry, but also of journalism. If we’re outnumbering them 6-1, we can at least cultivate relationships and content that are sensitive to the sorts of ethical dilemmas journalists may face.”

Barnes offered a hopeful thought. “All of us are seeing the numbers of journalists go down, but I think we also see a new enthusiasm. I wonder if the current environment might not do what Watergate did for journalism in the 1970s, inspiring young people to go into the field.”