Arkansas Cities, Counties Get Their Day in the Sun

“Are you interested in saving a lot of it?”

Vance is regional director for Entegrity Energy Partners LLC of Little Rock, one of several Arkansas solar providers riding the wave as local governments, agencies and schools plunge into a new solar mainstream. (See list below.)

“Solar is now the cheapest way to buy electricity. “A combination of the new law [Act 464 of 2019], tax advantages and other factors mean this is the best time” to act, he said, “with no upfront capital costs and guaranteed savings. Why would you not do this?”

Vendors like Scenic Hill Solar and Seal Solar of North Little Rock and Today’s Power Inc. of Little Rock are all building multiple government and school arrays this year.

“Interest in solar by governmental and educational entities has really escalated,” said Michael Henderson, president of Today’s Power. He said changes in law and tax incentives add up to a good bottom line.

“Today, solar is available for almost anyone for under 6 cents per kilowatt-hour, and for larger systems well under 5 cents. These savings are very attractive for budget-strained governmental entities.”

The average Arkansas retail electricity price is 10 cents per kilowatt-hour, according to June data from the U.S. Energy Information Administration.

County solar projects are either built or underway in Washington, Phillips and Jefferson counties; cities joining the parade include Fayetteville, Clarksville, Helena-West Helena and Stuttgart, which announced a collaboration with Scenic Hill just last week. The Walnut Ridge City Council is considering a project with Entegrity, which is also working with Searcy Water Utilities on a solar panel system approved Tuesday by the utility’s board.

Today’s Power will break ground on a solar plant for the city of Paris (Logan County) this summer, the company revealed exclusively to Arkansas Business last week. It is already building Fayetteville’s city system, featuring 10 megawatts of solar production and up to 24 megawatts of battery storage, on 87 acres at the town’s two water treatment plants. Ozarks Electric Cooperative is another partner in those arrays. Scenic Hill is planning a 6.5-megawatt plant for Ouachita County and its seat, Camden.

Katie Niebaum, executive director of the Arkansas Advanced Energy Association, said solar’s cost advantages let local leaders “free up precious resources, many times for critical items that have been delayed due to budget restraints. Moreover, solar projects provide jobs and serve as an economic multiplier in the communities where they are developed.”

The county requested bids from solar vendors, hoping to shave $250,000-$325,000 from its million-dollar annual electric bill. Central Arkansas Water and the cities of Russellville and Conway have also issued requests for solar proposals.

Fogleman is seeking a deal to provide 80-100% of the power gobbled by Pulaski County’s 40-odd buildings. A committee to weigh proposals will begin forming within weeks. 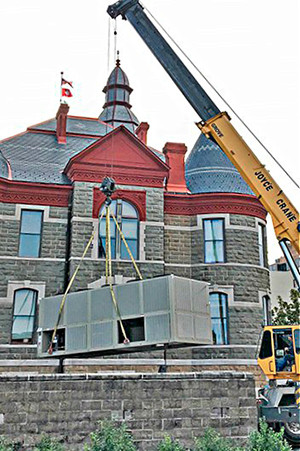 Entegrity of Little Rock handled a countywide energy performance contract with Pulaski County, including putting new efficient HVAC units in courthouses like this one in Little Rock. The $5.2 million project is saving taxpayers $445,792 a year, officials said.

“With the incentives available to the private developer, the price I’d anticipate would save the county between 25% and 35%,” he said. The savings would be a general revenue windfall, allowing the Quorum Court to decide how to redirect the cash. “That could mean expanding services, or addressing deferred maintenance needs, or helping with all the services the county provides. Savings derived from a solar service agreement would give the county much-needed flexibility without causing the budget to go up.”

Scenic Hill CEO and former Arkansas Lt. Gov. Bill Halter agreed. “This is a very good time to act, because folks who can move quickly will achieve the benefit of a higher tax credit. These are forward-leaning projects for communities and counties. The municipal project in Stuttgart will provide 100% renewable energy for city operations, save citizens tax dollars, lock in lower energy prices for 30 years or more, and contribute to economic development, all while improving the environment. It’s a four-part win for government and citizens.”

Pulaski, the first county to take advantage of EPC contracting, previously turned to Entegrity for a $5 million efficiency project calculated to save $446,000 a year. Fogleman called third-party solar the logical next step.

While Pulaski County’s vendor will own and operate the solar plant, Washington County took a different approach, said Dwight Gonzalez, director of county buildings and grounds. “We wanted to own the array, to own everything, and performance-based contracting let us do that. All the savings in our project have to be guaranteed.”

The energy performance contractor is Johnson Controls, an Irish multinational with headquarters on Colonel Glenn Road in Little Rock, and it selected Seal and LightWave as solar installation contractors.

“If we are guaranteed, say, $500,000 in savings and that falls $50,000 short, the county will get a $50,000 check to cover the difference,” Gonzalez said. “We’re going to be the largest county-owned solar producer in the state. With that, LED lighting, water conservation and other measures, we’ll be able to take care of some deferred work,” including replacing 88 HVAC units around the county.

“I don’t have to go to the Quorum Court for this money,” Gonzalez said. “We get it by spinning back the meter, and using money that would have gone to the electric bill. We call it capital cost avoidance.”

The state’s EPC system was initiated by law in 2013, developed by industry leaders and financial professionals in 2014 and expanded to municipalities and counties in 2015, according to the Arkansas Department of Environmental Quality.

Heather Nelson, president and co-founder of Seal Solar, which rebranded itself from Seal Energy Solutions this year to emphasize its tightened focus, noted that before starting the Washington County project, her company completed the current largest county-owned solar system in Jefferson County.

“Savings from solar directly impact every taxpayer in those areas,” she said. “Jefferson was the first county in Arkansas to both install and operate commercial-grade solar. There are a lot of ways to fund solar today, but for government entities performance contracting is a great financial vehicle, with little to no cash out.” Nelson urged businesses and governments to view energy spending holistically. “It has always been an expense line, but now it is an opportunity to invest in technology that will save money for decades.”