The pending arrival of Trader Joe’s in west Little Rock is considered a bell cow event that will attract other retailers.

“When you can start adding some of the significant retailers, there’s a follow-the-leader mentality,” said Hank Kelley, CEO of Little Rock’s Flake & Kelley Commercial. “If the market is good enough for a Trader Joe’s, then ...”

Other than the conceptual impact of the 488-store chain entering the market, Kelley can’t talk about the actual project his firm helped make happen at 11500 Financial Centre Parkway.

But that hasn’t affected the pace of construction workers transforming half of the 31,000-SF former Toys R Us space to accommodate the popular grocery chain with its famed private-label wares. If the opening of the Trader Joe’s in suburban east Memphis is an indication, the Little Rock store might not ring up its first customers until early 2020. The timetable of that 2018 Tennessee project, housed in part of a former Kroger in Germantown, covered nearly eight months from building permit application on Jan. 24 to grand opening Sept. 14.

Trader Joe’s, with its sample-happy format, generous return policy, cheap booze offerings and Hawaiian-shirted staff, is known as an offbeat but sharp competitor in the fresh produce sector.

Among tenant-seeking leasing agents, the company is recognized as a member of the much sought-after value-retailer club. It’s a peer group that includes the TJX Cos. — T.J. Maxx, HomeGoods and Marshalls in Arkansas — and that shares a blend of trendy goods with low pricing that draws consumers.

Having another member of the club set up shop in Little Rock is viewed as a very good thing among retailing recruiters. “The value retailer is who is moving in the market, and they can be choosy because it’s a tenant-oriented market right now,” said Kelley.

And Trader Joe’s couldn’t come at a better time. “In our marketplace, the amount of paper projects in retail are probably at an all-time low,” said Kelley.

The Shoppes at Chenal is one step removed from the drawing board. Little Rock’s Rees Commercial has cleared a 5-acre site in preparation to build the proposed 34,700-SF project.

As planned, the retail development at the southeast corner of Chenal Parkway and Arkansas Systems Drive encompasses three buildings. Construction would be devoted to a 22,734-SF shopping centerpiece winged by a pair of 6,000-SF homes envisioned for restaurants.

After coming out of the ground with a 7,800-SF building last year, Little Rock’s Commercial Realty is nearing completion on two more spec buildings to round out its Chenal Park Centre development at 15200 Chenal Parkway.

Construction of a 6,700-SF and a 7,800-SF building should be completed by mid-September. Developed with restaurants and medical offices in mind, the layout includes a would-be bank branch complete with drive-through capabilities.

Veiled plans for an addition to the Promenade at Chenal development are also generating talk in retail circles. (See sidebar.)

The Toys R Us Chapter 11 in 2017 that degenerated into the 2018 liquidation of the 735-store chain included Babies R Us.

The vacant big box was accompanied by a neighboring store that went dark after another 2017 bankruptcy: Gordmans Stores Inc.

The 50,000-SF former Gordmans location and adjoining former Babies R Us store are two of the largest blocks of space for rent in the Little Rock retail market.

The second-generation owner of Shackleford Crossings, an affiliate of Invesco Real Estate of Dallas, has had offers for pieces of the vacant power center space. Middle ground remained elusive in discussions for the former Gordmans and Babies R Us quarters.

“Some of us brought them deals for the power center portion of that,” said one local commercial leasing agent. “But the bid-ask spread was too great. What the landlord wanted and what the tenant was willing to pay were too far apart.”

In west Little Rock, prominent examples include the recasting of the Kmart at 10901 N. Rodney Parham Road into the Premier Medical Plaza and the Kroger at 315 N. Shackleford Road into an expansion of Immanuel Baptist Church.

“Big box retail may be experiencing a national shift; however, local owners and tenants have both proven that adaptive reuse is not only a possibility but a reality,” said Lee Strother, a principal with the Little Rock office of Colliers International. “Our market has responded well.”

With 70,420 SF under roof, the former Playtime Pizza in west Little Rock presents one of the biggest candidates for potential repurposing.

“The biggest challenge is retrofitting space that’s affordable for the landlord and/or tenant to make it work,” said Hank Kelley. “That’s the world we live in right now.”

Kohl’s is taking a less-is-more approach to enhance its operations by shrinking its retailing floor plan to create space to sublease. The company has struck deals with the Aldi grocery chain and Planet Fitness at some of its locations.

“A lot of retailers are looking at how they can reduce their footprint,” said David Elrod, principal broker at Elrod Real Estate in North Little Rock.

The world’s largest retailer is managing its own inventory of surplus space.

At last count, Walmart lists 89 stores for sale or lease across the country.

The properties range from a 146,000-SF former Sam’s Club on 15 acres for sale in Anchorage, Alaska, to a nearly 55,000-SF former Walmart Neighborhood Market for lease in Bristol, Connecticut.

Then there’s the ongoing effort by Walmart to convert excess land into cash. The company’s current roster of available property lists 526 parcels for sale across America. 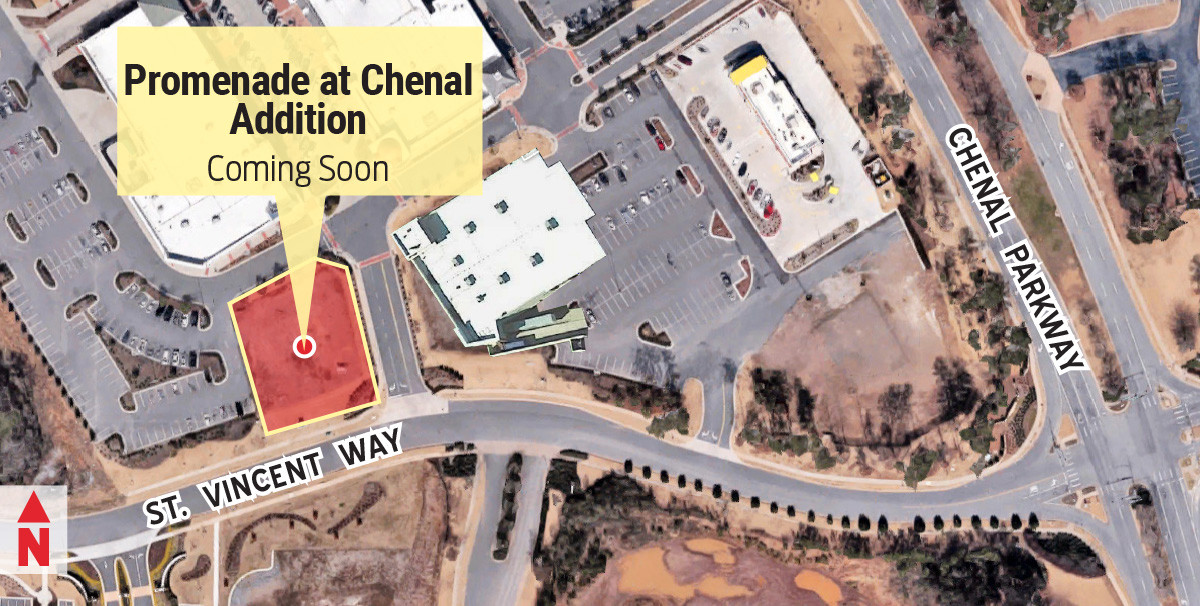 A groundbreaking announcement in the coming weeks is expected to highlight more activity at west Little Rock’s Promenade at Chenal. Anchored by an as-yet unidentified tenant, the new building will be constructed west of HomeGoods.

“We have a lot of exciting deals in the works, but we aren’t announcing any details just yet,” said Maegan Lawson, office coordinator for the Promenade at Chenal.

Occupancy at the 268,000-SF lifestyle center is slightly under 85 percent these days with the latest additions of Blu Spero, a women’s clothing boutique that opened a 1,788-SF shop in mid-May; and CycleBar, touted as the largest network of premium indoor cycling studios, which opened a 2,260-SF location in July.