Public agency administrators probably look forward to a visit from state auditors as much as everyone else looks forward to a trip to the dentist.

Helena-West Helena Mayor Kevin Smith thinks otherwise, even though his city has been on the receiving end of more than one poor audit report. As Smith and the city council of the Phillips County seat try to turn around Helena-West Helena’s fortunes and reputation, the audits provide crucial clues on how good a job they are doing.

Auditors do their jobs professionally so he can do his job politically, said Smith, who took office in January. “I didn’t think we could do our job without the state audit, frankly. They are the accountability section of government that keeps us honest. They are the first people I sought out when I got elected, our auditors.”

Roger Norman, who holds the title of legislative auditor, the top manager of Arkansas Legislative Audit, would like all Arkansans to view his department the way Smith does.

“I hope the public entities look at us as a resource that can help them,” Norman said. “We are not a ‘gotcha’ agency.”

Smith knows the importance of audits from the other side, too. He served 10 years in the state Senate and was the chairman of the Legislative Joint Auditing Committee.

When he took office, Smith said, he asked the auditors if the city’s financial situation was as bad as he expected.

“It was way worse,” Smith said. 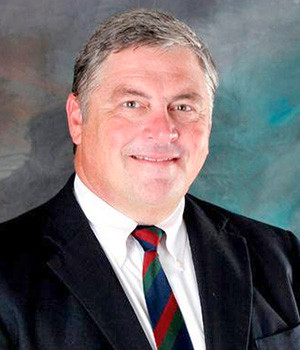 A September report filed with the LJAC by Deputy Legislative Auditor Marti Steel revealed some of the problems. The report said a lack of management oversight had led to a General Fund deficit of $480,000 by the end of 2018.

The report said that, by the time a 2018 budget amendment was approved in June 2019, General Fund spending was $1 million more than appropriated.

Smith said he and the city council have taken steps to tighten up the city’s spending and accounting. The report noted the changes that had been made, saying the city’s 12-year history of spending more than it took into the General Fund was a “growing concern.”

Smith said he is looking forward to his next trip in front of the Joint Auditing Committee when his city is out of the hole.

“When we get to that day, and we will, I might request to be called in front of the audit committee so I can brag about it,” Smith said. “You’re usually only called when you’re in trouble.”

The Helena-West Helena report is just one of approximately 1,000 the Arkansas Legislative Audit will file this year.

Norman oversees a department of 266 employees who annually audit the finances of cities, counties, school districts and state agencies all over Arkansas.

Norman said the Legislative Audit is a reporting entity, so it doesn’t make judgments about what it finds. But the auditors are required by statute to report to prosecuting attorneys any transactions that can’t be accounted for.

The department’s 2018 end-of-the-year report for the audit year 2017 showed the number of convictions spurred from auditors’ findings. Prosecuting attorneys obtained 23 guilty pleas or verdicts or pleas of no contests for the year; eight people were sentenced to prison terms and restitutions amounted to more than $1 million. 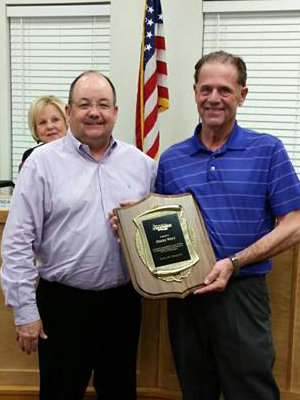 Jimmy Story (right) accepts a plaque recognizing his 20-year employment with the city of Farmington from Mayor Ernie Penn during an April 2015 city council meeting.

A notable case from that year included Jimmy Story, who pleaded guilty to stealing more than $1.5 million over eight years from the city of Farmington. Story, who had been Farmington’s finance director and clerk of the district court, received a 46-month federal prison term.

Norman said, when auditors find discrepancies, they look to see if the discrepancy is a one-time mistake or a repeated issue. If it is repeated, auditors look at the accounting structure: Are employees’ duties segregated? What internal controls are present? Who has access to the money?

“Most of them are due to either lack of segregation of duties or lack of internal control,” Norman said. “If there is only one person who has access to the funds, that certainly narrows it down. If it is a situation where three or four people are dealing out of the same till, so to speak, it becomes more difficult. A lot of times those are the types of situations that, when we refer to the prosecuting attorney, they’re not going to be able to make a determination of who is responsible.

“We refer a lot of things to the prosecutors that they are not able to prosecute for a variety of reasons.”

A state audit determined that Water Department funds were misused between July 1, 2017, and March 31, 2019. Former City Clerk Codi Bates and her husband, Tyler, were later charged with theft of property and forgery; both have pleaded not guilty and are scheduled for a pretrial hearing in February.

Sulphur Springs Mayor Shane Weber blames himself since he was in office when Bates was hired July 1, 2017, and was responsible for all the city deposits and receipts. A police investigation alleged that Bates handwrote city checks to herself and covered them with falsified records; more than $184,000 is missing.

Weber said checks were supposed to be signed by Bates and either himself or a designated city council member. Bates allegedly forged the second signature or the bank accepted checks with just one signature.

Weber, who took office in 2017, worked in the sheriff departments in Benton County and in Yavapai County, Arizona, and said he was disappointed because he prided himself on his ability to read people. He admitted he knew “absolutely zero” about being mayor when he took office.

“Just the sheer amount was staggering,” Weber said. “She allegedly started taking it two weeks after she started here full time. My whole thing to the audit committee was I can only treat this whole experience as a learning experience. It is a painful one.

“I’ll stop short of saying we have [improved] leaps and bounds, but we have done quite a few things to try to [prevent] this from happening again.”

Norman, the state auditor, said the prevalence of computer records can make it more difficult to track down malfeasance.

He said his auditors take 40 hours of continuing education a year and regularly meet with other auditors to keep atop of trends.

“I’m not for sure if they are getting any better but, with the electronic documentation you have now, it is a lot easier to manipulate transactions, manipulate documents to create your own,” Norman said.

“We’re starting to see situations where with criminals there are phishing techniques where they are able to get money out of bank accounts of the entities we audit through fraudulent means. In the past, to take money, you probably had to be physically present at the entity. Now you can do it from anywhere in the world.”

Norman said most fraud and theft are the results of someone finding themselves in a jam and thinking of a short-term solution.

“I’ve got more sad stories than funny stories,” he said. “Most of the time the people you find stealing are in situations where they got into a bind with gambling or sickness or alcohol issues. They say, ‘I’ll just take this, but I’m going to pay it back.’ It never happens.”