The person is from Pine Bluff and is currently in isolation at a hospital, he said. The governor also declared a public health emergency because of COVID-19, which has infected more than 1,000 people in the United States and killed at least 30.

The Arkansas patient had traveled out of state recently but had no known international travel, Hutchinson said. The positive sample has been sent to the Centers for Disease Control and Prevention for further confirmation.

Dr. Nathaniel Smith, state secretary of health, said officials will monitor any potential contacts the person had but said there's no evidence at this point of the patient spreading it in Pine Bluff or elsewhere in the state.

For most people, the new coronavirus causes only mild or moderate symptoms, such as fever and cough. For some, especially older adults and people with existing health problems, it can cause more severe illness, including pneumonia.

The vast majority of people recover from the new virus. According to the World Health Organization, people with mild illness recover in about two weeks, while those with more severe illness may take three to six weeks to recover.

Hutchinson said he was implementing a new policy for the next 60 days prohibiting out-of-state business travel for state employees without approval from a cabinet secretary. The governor also encouraged Arkansas residents to think carefully about trips they have planned, including whether they're to places with large gatherings or areas with confirmed cases.

“These are reasonable questions Arkansans should ask themselves as they look at their travel plans, very similar to the questions we'll be asking state employees,” he said.

Hutchinson, however, said he didn't see a need for canceling events such as school activities. The governor said his cabinet secretaries have submitted the contingency plans he requested last month for continuing state operations in case of an outbreak.

The state this week told nursing homes to conduct screening of staff and visitors over concerns about the coronavirus. Hutchinson's emergency declaration Wednesday gives the Arkansas health secretary, in consultation with the state education secretary, the sole authority to close public school campuses throughout the state because of coronavirus.

Watch Video of the News Conference

Spotlight
Turning the Osborne House Into the Roberts Residence 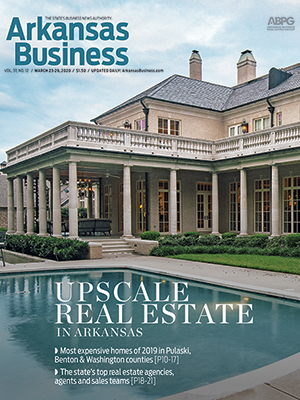