The Arkansas State Medical Board and Arkansas State Board of Nursing have accelerated their processes to grant more licenses, anticipating a growing need for professionals as the COVID-19 pandemic continues.

“It’s been said before that we’re very grateful for our nurses, our doctors, the lab technicians who are all on the front line of this fight. And they’re there every day,” Gov. Asa Hutchinson said Wednesday afternoon, at his daily news conference on the coronavirus outbreak. “But as you look at how long this might extend, there’s going to be fatigue. There’s going to be some of those health care professionals that might have to isolate for their own health needs or because they’ve had a positive test.

Emergency temporary licenses have been issued to 15 residents who have completed one-year internships, and their licensing fees were waived, he said.

The governor said the medical board had accelerated its overall licensing process as well, at his request, adding more than 100 new licensed physicians to the Arkansas' workforce this month.

In addition, the nursing board is offering a 24-hour turnaround on licenses and has licensed 300 new nurses, Hutchinson said.

He also said some nurses had been laid off or had their hours cut because many elective procedures have been canceled. Sue Tedford, executive director of the Arkansas State Board of Nursing, can refer those nurses to places in need, the governor said. 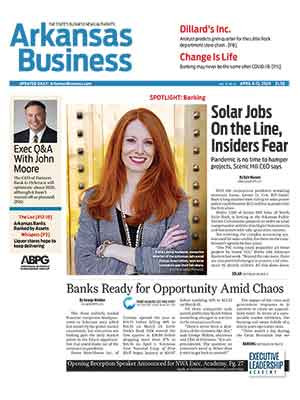