What Mask Orders Mean for Businesses

by Justin Allen
Article sent successfully!
We were unable to send the article.

As the mask debate rages in the midst of COVID-19 there has been quite a bit of pressure on Gov. Asa Hutchinson to mandate mask usage statewide. He has thus far declined to take that step, which has led to some action on a city level.

Specifically, two Arkansas municipalities took measures designed to encourage, and in some cases require, the wearing of masks in certain situations. The Fayetteville City Council adopted an ordinance on June 16 and the mayor of Little Rock issued an emergency declaration on June 25.

Here's a quick look at what these orders do — and don't do — and what Arkansas businesses should know about them.

Generally, the Fayetteville ordinance requires the wearing of a mask when present in a government or private building. Exceptions are made for:

The Fayetteville ordinance also creates a fund to help pay for masks for individuals and businesses. There will be no fine for a person who violates the ordinance but, if the ordinance is enforced by a private business, those people can be denied entrance.

In Little Rock, the fundamental purpose of Mayor Frank Scott Jr.'s declaration is to encourage the use of masks when social distancing is not practical. Contrary to the Fayetteville ordinance, it is not a mandate on private businesses. Rather, it is a very strong form of encouragement from the mayor on those properties.

Scott's declaration calls for mask usage when a person is inside an essential business (such as a grocery store), inside an elevator and when using public transportation. It also urges businesses to require employees and contractors to use a mask when interacting with the public, and to post signage outlining best practices. The declaration then adopts state guidelines for masks at restaurants, bars, barber shops, salons and gyms.

In terms of exemptions, mask usage is not required when a person is alone, such as working in an isolated office. Moreover, children under 2 years of age and those with health conditions are exempt.

The most significant problem for these measures is preemption. That is, given all the mandates and directives issued by the state, primarily through the Department of Health, can cities adopt measures that are in conflict with, or broader than, those issued by the state? Fayetteville's city attorney noted this very issue in a letter, available on pages 12 and 13 of this document here, in which he writes:

"I do not think that the Governor's and the State Board of Health's express decision to forgo any mandatory requirement that persons must wear a facemask in all businesses of public accommodation can be overridden by a city ordinance despite our general police power. … If this facemask wearing requirement had not been so clearly rejected by the Governor's recent public statements, we could have had some argument that our regulation would not have been in violation of the State's power. But the Governor's clear and express rejection of any requirement for the general public to wear facemasks … makes it very difficult to argue that such a city ordinance would not be in contravention and opposition to the Governor's Proclamations and the Board of Health's regulations."

As noted above, Governor Hutchinson has expressly declined, on several occasions, to issue a state requirement for masks. He has also stated his belief that any local measures that conflict with his executive orders are invalid. In my humble opinion, I think the governor is correct. The Fayetteville ordinance, in particular, is likely invalid based on preemption.

Late last week, in response to the calls for heightened mask requirements, the governor issued an executive order designed to give municipalities the authority to issue an ordinance to strongly encourage mask usage and allow private businesses to deny entry without proper mask usage.

While law enforcement will not be able to arrest or punish offenders, the order calls for them to assist private businesses in enforcing their requirements — think trespass — and assist in educating the public on the benefits of mask usage.

What effect does this executive order have on the Fayetteville and Little Rock measures? The Fayetteville ordinance likely remains invalid given the requirement aspect coupled with the penalties. But Scott’s declaration seems consistent with the governor's order.

Despite validity and enforceability issues, the concerns by these public officials are understandable. Nearly every expert on the subject agrees that the best way to mitigate the spread of COVID-19 is by wearing masks. It is even more critical given that mask usage in this instance is not so much designed to protect the wearer, but to protect those around him or her.

As for businesses, it's important for them to take all reasonable measures to prevent the spread of COVID-19, whether that be mask usage, hand washing, social distancing or the like. In adopting and enforcing such practices, a business will be in a good position to defend against any claims, legal or otherwise, that it was responsible for exposing the public to the virus.

The bad news is that the end of this pandemic is not yet in sight. In fact, it may get worse before it gets better.

The good news is that simple measures, such as wearing a mask, will go a long way in helping us successfully navigate the pandemic. My mask stays in my truck, ready for use whenever I need to go into a store or engage the public. Where is yours? 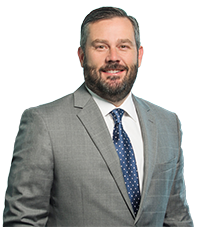 Justin Allen leads the government relations practice group at Wright Lindsey Jennings of Little Rock and works with state and local governments on matters of policy, regulation and legislation.