Have Cup, Will Travel: Drinks Hit The Streets

The Argenta Outdoor Dining District kicked off publicly Aug. 7 not with a wild party, but with families dining under tents on a blocked-off section of Main Street, children playing tag on the historic downtown art district’s sidewalks and grown-ups enjoying adult beverages on street corners.

Seal Solar CEO Josh Davenport was there with his family, showing off a gargantuan braised beef rib from Brood & Barley, the new Argenta gastropub and a sister eatery to Flyway Brewing Co. nearby. “This is great weather, and it’s good to be out,” Davenport said, gesturing to a rib that looked like a prop from a caveman movie.

Outdoor drinks and dining have become commonplace in American downtowns, a trend pioneered in Arkansas by Little Rock, which initiated the River Market Entertainment District last summer. Cities like North Little Rock, Fayetteville and Springdale followed suit, designating outdoor zones for streetside dining and drinking under strict rules. (Hot Springs has such a district authorized for special events, but all those events so far have fallen to the coronavirus pandemic.)

In North Little Rock, outdoor drinking ends at 10 p.m. daily, as opposed to midnight on weekends in Little Rock. “One thing the mayor and the City Council were thoughtful about was that we weren’t looking to be Bourbon Street,” said Chris Kent, executive director of the Argenta Downtown Council, who took a dining-under-tents approach by Flyway and expanded on it.
#asset_cutline

A Fayetteville official also brought up Bourbon Street as a non-model, noting his city’s own 10 p.m. limit.

“About 10 o’clock, you start to see people wanting to get a little rowdy, and we’ll be shutting things down at that point,” Kent said. “We focused on dining, and offering a few drinks with meals.”

Ranging from just a few blocks of North Little Rock to more than 170 acres in Fayetteville, the districts were conceived as pre-pandemic business catalysts for downtown restaurants, bars and shops. But the zones have taken on greater significance in the pandemic, easing fears about the safety of serving and consuming meals indoors.

“A local bar owner said, ‘Please don’t make me choose between economic gain and the safety of my staff and patrons, because with the right tools, I can have both,’” recalled Devin Howland, director of economic vitality for the city of Fayetteville. Howland was one of the planners behind the new Outdoor Refreshment Area, active since June.

“The refreshment area has been very well received,” he said. “It has the support of the Dickson Street Merchants Association, the largest business organization downtown, and has anchor institutions such as George’s Majestic Lounge and TheatreSquared, so it’s performance spaces and not just bars and restaurants.”

Fayetteville’s district is the state’s largest, and Howland said its first goal was to be inclusive. “If a bar or restaurant wanted to participate, they had the opportunity,” Howland said. By the end of last week, 50 businesses were participating, a statewide high, he said. More than 80% of businesses in the zone are involved.

Molly Rawn, CEO of Experience Fayetteville, said the pandemic had shifted her thinking on the refreshment district, which went into effect in June after a year’s planning. “It became all about what we could do to help businesses during the pandemic,” she said. “It became clear from medical experts that being outside was likely to be less risky than eating and drinking indoors, so this was a way that people could still patronize downtown business and eat and drink, but in a safer way.”

Time has been too short for a comparison of hospitality tax revenues, but Rawn said some restaurateurs were reporting two or three times the business they were seeing in the summer doldrums before outdoor drinking began.

She expects the district to become a recruiting hook for new restaurants and businesses downtown, and a draw for lunch crowds.

Leo Orpin, a founder of Springdale’s Black Apple cidery and taproom, isn’t sure the district will increase traffic, but he expects customers to be more comfortable moving about. “Going outside and being able to social distance, you’re safer on a COVID level,” he said. “I have customers from Fayetteville who go straight to Black Apple and then they go home. [Now] you can go to any of the bars down there; you can grab a drink and go exploring.”

Stirring downtown foot traffic was also a goal in North Little Rock, Mayor Joe Smith said, noting that the initial one-block outdoor dining zone expanded to a two-block stretch of Main from Broadway to Fifth Street in its second week. The zone includes the new $5 million Argenta Plaza at Main and Fifth, where couples from midtown Little Rock were relaxing over drinks two weekends ago. “We like this space even better than the Little Rock entertainment district,” one visitor said. “It’s more open.”

Brood & Barley, led by Flyway’s Jess McMullen, and the Four Quarter Bar were key participants again in Week 2, when the 24 tents became 48, stretching into the block between Broadway and Fourth. The Four Quarter, owned by Conan Robinson, offered local brews, tacos and even a smoked cheddar meatloaf. Ristorante Capeo at Main and Fifth did its regular dine-in and takeout business, socially distanced inside.

The Argenta Downtown Council and local merchants spent about $1,000 on tents after Flyway rescued its cash flow with an aggressive outdoor dining push.

But Kent said there’s no panacea in a crushing pandemic. “A lot of people see a silver bullet to boost their downtowns, but it really doesn’t provide that,” he said. “It just gives you another tool.”

Little Rock has extended the River Market district’s hours to 5 p.m. to midnight on Fridays, 10 a.m. to midnight on Saturdays and 10-7 on Sundays. And Little Rock Convention & Visitors Bureau CEO Gretchen Hall noted that a temporary entertainment district is operating in the SOMA district along Main south of Interstate 630. 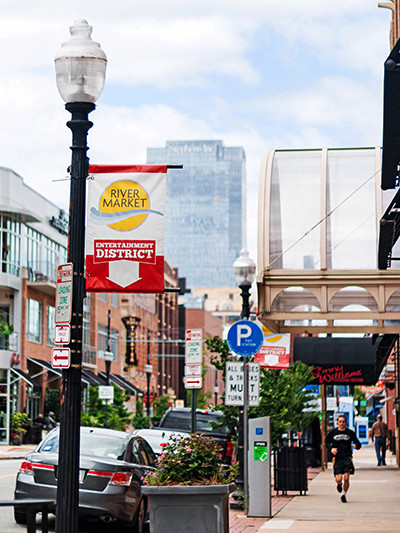 “LRCVB assisted with the expansion of the [entertainment district’s] hours and boundaries to create consistent operating hours and make it easier for district restaurants, bars and shops to promote,” she told Arkansas Business. “It allows guests to enjoy an adult beverage in expanded outdoor areas, … the same benefit provided in SOMA with the temporary district. During these unprecedented times, we look for ways to promote and support our industry partners, and felt this could be beneficial as restaurants continue to operate with capacity restrictions.

“I certainly hope it is helping.”

Hall’s director of River Market operations, Diana Long, said some bars have reported little effect from the district, “but they are not really pushing it and aren’t hosting live music.” A new bar, however, the Library, has music most times and is “seeing a lot of River Market Entertainment District usage,” about 250 patrons a week. “They are hosting live music, have windows that open onto President Clinton Avenue and are really pushing it.”

Among non-bars, Long said, “Nexus [Coffee & Creative] reported that they just had their best week since the pandemic started, and Gus’s [World Famous Fried Chicken] is doing really well, too.” The city lists a dozen businesses that offer official cups and wristbands, including Sonny Williams’, the Flying Saucer, Stickyz Chicken and Cache restaurant.

Rob Byford, who started the Library early this year after years with Slim Chickens, said the state’s current 66% capacity rule makes the entertainment district crucial to serving more customers. With social distancing rules added to the capacity limit, he can realistically fit only about 100 patrons in his normally 300-capacity establishment.

“But the whole front of my building is garage-style glass doors that open to the street, and we have a curbside bar and small kitchen area we put in,” Byford said, adding that he did qualify for the Paycheck Protection Program and was able to pay his employees, though he said larger unemployment benefits had made hiring difficult.

“But I’m booking 12-15 musical acts a week, and everyone’s getting paid the same as they were before, and most of my bills are getting paid,” Byford added. “I think the goodwill that we’ve built will pay off, and I know that our guests are very thankful just to have somewhere to go and something to do, and that it will be as safe as it can be.”