The old punchline about folks “dying to do business with you” holds a serious truth about the funeral business: More deaths mean more customers.


It’s always a sensitive topic, but particularly so a year into a pandemic that has killed nearly half a million Americans. But Jeff Smith of the growing Smith Family Funeral Homes chain tackles it head-on.

Smith’s six funeral homes didn’t see a big spike in cases until October, six months into the national pandemic, as Arkansas deaths hurtled toward a winter peak. Only in the last few weeks have hospitalizations and deaths significantly declined, according to state statistics.

While Arkansas COVID-19 cases pushed hospital intensive care units to the limit, deaths in the state never overwhelmed morgues or required refrigerated trucks for storing bodies, as was the case in other hot spots, Smith said.

Deaths from all causes handled by Smith’s homes in Little Rock, North Little Rock, Sherwood, Beebe, Benton and Arkadelphia were up 9% over 2019 numbers in October, 26% in November, 24% in December and a mighty 35% in January as compared with January 2020.

The son of a mortician, Smith found his calling in his father’s footsteps after a stint in the mortgage business. The Smith Family business has been expanding for a decade. He bought Little Rock Funeral Home from fourth-generation operator Brad Leggett in July — his biggest acquisition yet — but for an apples-to-apples comparison, his calculations included Leggett’s numbers for 2019 and the first half of 2020.

“I’ve talked to people all over the state, and all funeral home numbers are way up,” Smith said. “With our size and ability to shift staff and resources from site to site, we can cope. But for a smaller funeral home in a smaller town, it’s a little easier for them to be overwhelmed.”

The Smith chain of mortuaries handled 1,597 deaths in the 12 months through January, up 9% from 1,465 a year earlier and a whopping 28% in November, December and January.

Deaths have been up significantly nationwide for 11 months. Nearly 500,000 more Americans have died since March than would have in a normal year, an indicator of the pandemic’s broader toll. Deaths in the 50 states were 20% higher than normal from March 15, 2020, to Jan. 23 of this year, according to mortality data from the CDC. The data covered deaths from all causes, not just coronavirus, to eliminate doubts about disputed COVID diagnoses and other variables. The bottom line is that far more people than normal died during the past year.

Funeral directors keenly feel their obligations to grieving families, and partly because of those sensibilities several industry leaders declined to comment on business and COVID-19.

Nevertheless, aside from the suffering it has caused, Smith said the pandemic has awakened a tradition-bound industry. “Rightfully so, a lot of people would say, funeral services are slow to change. But in any industry, COVID has forced companies to change and adapt.”

Adaptations included funerals with as few as 10 attendees early in the pandemic, “and oftentimes 10 wasn’t even enough for all of the family,” he said. “We had technology available” for making virtual funerals public, “and I think some of those things that we adopted in the beginning will stay with us.”

For secure streaming, Smith uses Facebook Live, and families sign a disclosure form allowing it. “There are streaming services that can be purchased, but we find Facebook to be very reliable and secure.”

Smith, who partnered with his wife, Leslie, to buy his parents’ mortuary company in 2010, also said he and his fellow funeral directors developed remote ways, including Zoom, to counsel loved ones and finalize arrangements without a physical stop at the funeral home.

When the surge hit in late fall, he said, “overnight funeral homes had to figure out how to work smarter, streamlining operations to figure out how people on our team can cross-train, help each other and jump in with an esprit de corps.”

Smith’s homes installed a bar-code system to track every surface the dead have touched, along with every operation and service performed. “When a deceased comes into our care, the very first thing we do is put an ankle bracelet on with the name and a bar code. We have bar codes on all our equipment, shelves, the cooler tables, rooms, so wherever we move a deceased throughout our operation, you can scan the bar code on the ankle and at each location right up to the point where they’re cremated,” he said.

Lloyd Holcomb Sr. of Henson-Holcomb Mortuary Inc. in Pine Bluff said funerals were up about 10% in 2020 at his family-owned operation, which handles four or five funerals in a typical month, but he doesn’t draw a direct link to COVID-19. “We did about seven more funerals in 2020 than we did in 2019, but I don’t think it has much to do with the pandemic,” said Holcomb, who has been a licensed mortician since the early 1960s and has been at Henson-Holcomb since 1968. He owns the mortuary with his wife, Irene, and runs it with the help of sons Rodney Holcomb, the assistant manager, and Lloyd Jr., a Pine Bluff city councilman and minister.

“We had six or seven cases where death was caused by COVID, and a few others that had tested positive but the virus wasn’t the direct cause,” Holcomb said. “I like to think our increase was a result of word of mouth, that people heard about our services or were recommended. We do have insurance and a burial association, but I’d say about 50% of the people we served in 2020 did not have insurance ties with us.”

Holcomb agreed with Smith that COVID-19 has changed the face of funerals. “The main thing that changed is the distancing,” he said. “People can’t be close like they normally are at a funeral. Since the pandemic began, I’ve only been to two churches that allowed services inside, and while I’ve had three or four in my chapel, I’ve limited seating to 65 when we can seat 200 comfortably. Almost all the other services have been at graveside.”

Both Smith and Holcomb said COVID-19 presented few new risks in handling bodies, a process already covered by strict protocols including masks, gloves, aprons and particular care. “I have always been strictly careful not to take anything home with me,” Holcomb said.

Holcomb, who went to mortuary school fresh out of the historically black college now known as the University of Arkansas at Pine Bluff, said that black-owned funeral parlors have been a community mainstay for a century or more.

“When I was in school, they taught us that black funeral homes take so long to bury a loved one because black people so cherish their family,” he said, making it clear he wasn’t suggesting that white families mourn less. “But as a rule, within three days of a white person passing, the family will go on, have a funeral and deal with it, and go on about their lives. But black people have to wait until the weekend, when all the relatives can come together.

“Now myself, I’ve told my wife and boys to bury me on the third day from when I pass,” Holcomb said with a laugh. “Call my relatives and say Lloyd died and tell them where the funeral is going to be. Don’t ask anybody when they can come.”

Health Care
Gaudet: Whole Health's Medical School Will Be 'First of Its Kind' 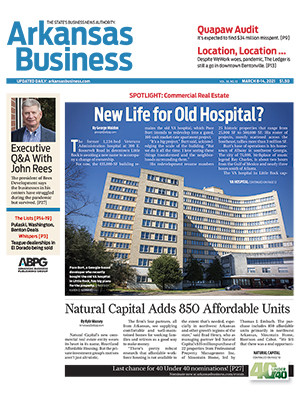