New Tax or Not, Mayor Set to Rebrand the Rock

But a strong pull grabs you when Scott, a part-time pastor, turns hometown evangelist. Sales tax or no, he’s ready to rebrand the city with a new marketing campaign, a new city flag and a new website. And they all need to project a new swagger, he suggests.

With the economy rebounding and tourism poised to bounce, Scott will seek bids from marketing pros to remake the image of Arkansas’ capital. The city has been dogged “for decades by a history of inequities and misinformation,” as the mayor put it, not to mention lingering images of 1950s racism and “Banging in Little Rock” infamy from crack epidemic violence a quarter-century ago.

Scott wants to show off city strengths like livability and affordability, culture and dining. And embracing history is crucial, he said. Little Rock Central High School is now a National Historic Site seen by up to 170,000 visitors in a normal year. And Scott says that while it’s true the mobs that menaced the Little Rock Nine in 1957 were sons and daughters of Little Rock, the heroes of that moment — the brave black children, their parents and mentors like Daisy and L.C. Bates — were also Little Rock citizens.

“Mrs. Bates was not only a mentor to the Little Rock Nine, but was also the only woman to speak at the March on Washington [in 1964]. Mr. Green [Ernest Green of the Little Rock Nine] is a dear mentor of mine, and I was able to go to his 60th reunion in 2018 when I was on the campaign trail,” Scott said. “For him to see our election meant a great deal for him, understanding our city’s progress.”

Education is the great equalizer, the mayor said. “This country couldn’t even start the journey of equalization without education, without the Little Rock Nine or without Arkansas.”

The rebranding will burnish the “best version of Little Rock and its people,” he said, pausing to praise his “old graduate school classmate,” Gretchen Hall of the Little Rock Convention & Visitors Bureau, for persevering through the pandemic.

“They’ve done a great job. We just believe it’s time to rebrand our city and build a unique narrative, selling Little Rock not just to businesses but as a place to call home and build a family.” The median age in Little Rock, he noted, is 36. “Pushing out of the pandemic, we want to be better than our beginnings, and this is an opportunity not only to rebound, but to rebrand, and kind of experience a rebirth. As a city that’s really a good place to live, we have to project some swagger.” 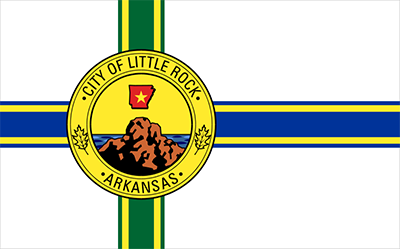 The current flag used by the city of Little Rock.

The new city flag will replace a 1988-vintage banner that won a City Beautiful Commission design contest. Attorney David Wilson, then a clerk at the Mitchell Law Firm, took the $1,000 top prize. In second place, with a $500 check, was veteran Little Rock ad man Craig Rains.

The rebranding effort will also include “our website, our stationery, but more than that we intend to really rebrand selling our city to our state and nation,” Scott said.

Commercials will focus “not only on … travelers, but also on those looking for a place to call home in the new economy,” Scott said. “We see possibilities in digital and online marketing, online social media, as well as TV.” Precise messaging will be worked out after competitive bidding determines an agency of record.

“There will be a request for qualifications, and the finances for the campaign will be a factor, in that we have been and always have to be a good steward of taxpayer dollars,” Scott said. Budget details and a timetable have not been finalized, but Scott expects the RFQ to go out this summer.

“In 27 months in office, we’ve seen a 100-year flood, a global pandemic, social justice unrest, a political insurrection and a historic snowstorm,” Scott said. “We’re battle-tested and ready, and we’ve had a historic year of job growth, with 4,000 new jobs in our city, and we’re likely to double that by the end of the year. It’s time to share the good news.”