Ray Vester has retired from the board of directors of Farmers & Merchants Bank in Stuttgart.

Vester served on the board for 33 years. Most recently, he was secretary of the board.

Vester also served on the Producers Rice Mill board for 24 years and the Stuttgart Memorial Hospital board for 14 years.

Meagan Clark has been named a partner, Ryan Arneson has been hired as a campus recruiter, and Joey Lambert has been promoted to marketing manager of BKD LLP in Little Rock.

Previously, Clark was a director at the firm. Clark has more than 13 years of experience in accounting and audit services. She is a member of the American Institute of CPAs and Arkansas Society of Certified Public Accountants.

Lambert was previously the campus recruiter for the firm. Arneson previously worked for Insight Global. 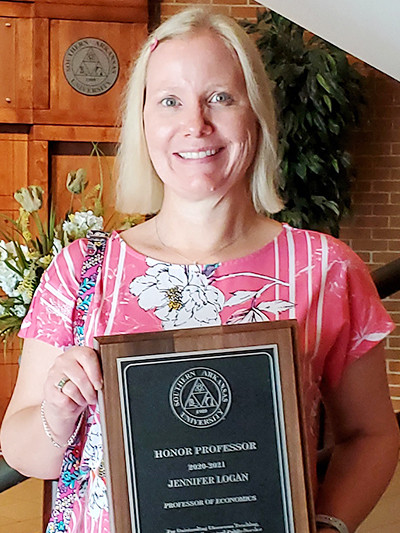 Jennifer Logan, a professor of economics, has been named Honor Professor by Southern Arkansas University in Magnolia.

The Honor Professor recognizes professors for their excellence in teaching, research and service.

Terri Patton has been hired as a sales professional by Sissy’s Log Cabin in Little Rock. Patton previously worked in retail sales at the Everyday Chef. Patton also has 10 years of experience in retail banking.

Nonprofits
Waltons Back $1M Fund for LGBTQ Nonprofits in Arkansas