The “Girl” was 53 years old and was the first woman to head a multimillion-dollar company. Shaver had been working at the New York department store, whose 1826 founding made it the oldest department store in the United States, since 1924, becoming president in 1945. And $110,000 was “the highest salary for any woman in the United States at that time,” according to the “Chronology of Women’s History” by Kirstin Olsen.

These achievements are remarkable, but Shaver, born in Center Point (Howard County) on July 29, 1893, is best remembered as one of the greatest promoters of American fashion, one of retailing’s greatest innovators and a genius at marketing. Shaver was the first to send branches of department stores into the suburbs, the first to create separate departments for teenagers, brides and expectant mothers and one of the first to implement personal shopping.

Shaver earned the title of “Fifth Avenue’s First Lady,” and her retailing influence was known as “the Shaver Touch.” Under her, the animated holiday windows at Lord & Taylor’s flagship store at 424 Fifth Ave. became a New York tradition that endured until that location closed in 2019. Under her, “the American Look” in fashion took flight.

Shaver is credited with introducing Lord & Taylor’s logo and its icon, the American Beauty rose.

She transformed Lord & Taylor, bringing it to international fame among the great department stores of the United States. Under Shaver’s leadership for 14 years, the store’s sales grew from $30 million to $100 million.

In 1930, she co-founded the Fashion Group, now the Fashion Group International, a global nonprofit advancing the interests of the fashion industry that is one of that sector’s most influential voices. And she co-founded what became the Costume Institute at the Metropolitan Museum of Art in New York, whose annual Met Gala fundraiser is arguably the highlight of the New York social season.

Shaver dressed in austere suits, but she always carried that most proper accessory to the Southern woman’s wardrobe: a lace handkerchief.

What retailing innovations Shaver didn’t create she recognized and promoted. She had what are perhaps the most useful of executive skills, more valuable even than originality: She knew a good idea when she saw it and she could figure out how to execute it.

And when Shaver died on June 28, 1959, her obituary also made the front page of The Times, which wrote of her arrival in the city, sometime before 1919: “Miss Shaver and her sister came to New York on a fast-running, extra-fare train from Chicago because Elsie was in a hurry to start her art career.

Melissa Houtte is a retired journalist living in Homestead, Florida, who has written an unpublished biography of Shaver titled “The Smartest Girl on Fifth Avenue: How Dorothy Shaver Defied Tradition and Became the Mother of American Style.” She is also the author, with her sister Alison, of “Alligators, Old Mink and New Money: One Woman’s Adventures in Vintage Clothing.”

In an interview with Arkansas Business, Houtte called Shaver “a master marketer. But she also understood that you were marketing the store and not just the merchandise.”

Houtte added: “She was beyond uncanny in her ability to look to the idea of connecting with the everyday person even as the store was very stylish, high-end. She understood that everyday people would like to be as stylish as the wealthy. She made her store accessible to everyone.”

Before Sam Walton demonstrated to the world his sure instinct for what Americans wanted to buy and how, there was Dorothy Shaver.

Shaver was, indeed, an Arkansas girl, but she came from a family that was privileged by any measure, if also more colorful than most. 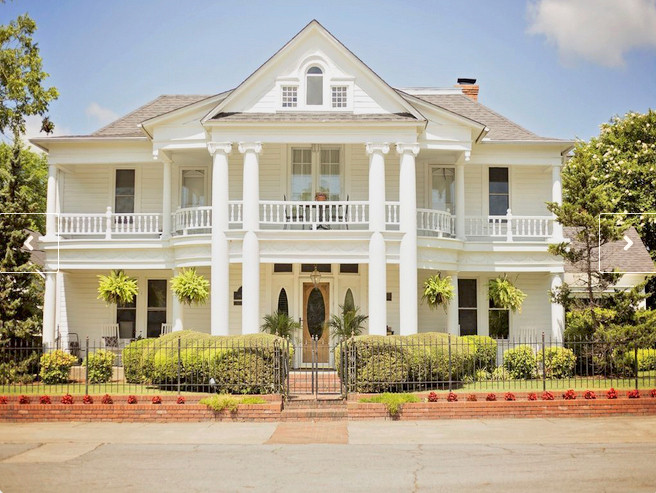 The Shaver home in Mena

Shaver’s paternal grandfather was Robert Glenn Shaver, a former Confederate officer whose troops called him “Fighting Bob.” His activities with Arkansas’ Ku Klux Klan led to charges of murder, arson, treason and robbery, and he fled the state for New Orleans. Robert Shaver returned to Arkansas when his friend Elisha Baxter replaced Powell Clayton as governor and charges against him were dropped.

When Dorothy Shaver was about 5, her family moved to Mena, where her father, James David Shaver, had a law practice. He later headed the Mena School Board and became a chancery judge for the 6th Judicial Circuit. The family lived at 701 12th St. in a handsome Colonial Revival house that is on the National Register of Historic Places and that is now the Carriage House Inn.

Dorothy had two older brothers and two younger sisters, Elsie, born in 1896 and with whom she was particularly close, and Catherine, who died of diphtheria at age 4 when Dorothy was 12.

Shaver graduated from Mena High School as salutatorian, and her father, apparently fearful that she would take off with a boyfriend who, in her father’s estimation, “had more personality than brains,” urged her to go to college. Shaver attended the University of Arkansas for two years, 1911-13, and then became a schoolteacher in Mena.

In 1914, Shaver and three other single female teachers were not rehired by the Mena School Board apparently because they had attended a dance. Shaver went on to teach school in Prescott and then again taught in Mena during the 1915-16 school year. Shaver had “very quickly seen the limits of her life” in Arkansas, Houtte said.

In 1917, the year she turned 24, she accompanied her sister Elsie, an aspiring artist, to Chicago, where Elsie studied painting at the Chicago Institute of Art.

By the late teens, the sisters were in New York and looking to earn money. Shaver, aware of the financial success of Kewpie dolls, suggested Elsie design a doll family that Dorothy would market, and so the “Five Little Shavers” were born.

The Shaver sisters had a third cousin in New York, Samuel Reyburn. Originally from Little Rock, Reyburn was then the president of Lord & Taylor. (Reyburn, once treasurer for the city of Little Rock, a banker and founder and president of the Arkansas Diamond Co., deserves his own biography.) They showed him the dolls, and the department store placed an order. They were a hit, with 100 of them selling in one day, according to Shaver biographer Houtte.

The Shaver sisters produced the dolls, which were sold in a number of department stores, including Marshall Field, for about four years. “We made a fortune,” Dorothy said. The Mena Star, reporting on the sisters’ success, wrote, “The sisters are making a name for cleverness in a city already full of clever folks.”

When Elsie grew tired of the enterprise, the sisters sold the rights to the dolls to the Madame Alexander Doll Co., Houtte said.

In 1924, Reyburn offered Dorothy Shaver a job for the third time. This time she accepted. Although Shaver usually neglected to mention it, her first job at Lord & Taylor was in the money-losing shoe department, Houtte said. Shaver declared that “75% of the shoe stock was outmoded and would need to be replaced,” Houtte said. “Once she found her footing in New York, Dorothy never seems to have had any hesitation about her instincts.” 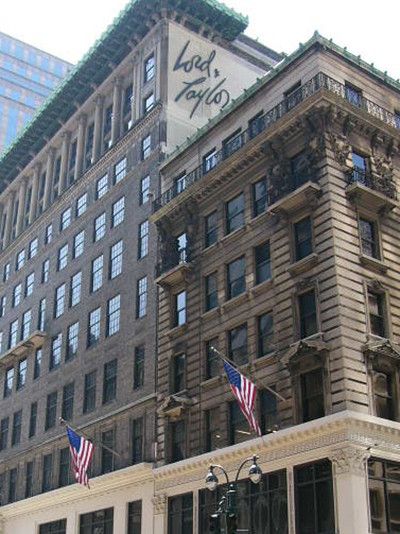 Shaver was soon promoted to manager of the comparison shopping bureau at Lord & Taylor. Comparison shoppers were essentially spies. They visited the competition to report on merchandise, prices and services.

Shaver came to the conclusion that Lord & Taylor should focus on customers rather than the competition, and so the Bureau of Fashion & Decoration was born. She, naturally, headed it. And while the company began trying to determine customers’ needs and forecast trends, it also became an arbiter of style.

In 1927, Shaver gained a seat on the board of Lord & Taylor. In 1928, she organized a wildly popular exposition at the store on modern French decorative art, and Lord & Taylor began promoting European modernism, including works by designers Emile-Jacques Ruhlmann and Pierre Chareau. “This was a huge gamble,” Houtte said.

“The aim of the exposition, according to Samuel W. Reyburn, president of Lord & Taylor, is to determine the reaction of the American public to modern art in all its developments and to ascertain whether there is sufficient interest here to justify activity on the part of American artists, manufacturers and merchants in the production and presentation of such merchandise as a business venture,” The New York Times reported.

The interest was there. The exhibition attracted 320,000 visitors. “Lord and Taylor has taken a very definite step forward toward the actual placing of modern furniture in American homes,” Good Furniture magazine reported in 1928.

In 1931, Shaver was named vice president of the company. In July of that year, she launched a national campaign called American Fashions for American Women, Houtte said, seeking to promote U.S. designers and to challenge French domination of the industry. Shaver “announced that they would introduce designers by name in advertising and store windows and treat them for the first time the way top French designers had been treated for years,” Houtte said.

In 1932, at a big luncheon, Lord & Taylor introduced the clothes of three American designers by name. The reception was mixed.

“Then it started gathering steam,” Houtte said of the initiative. Lord & Tay-lor began adding the names of designers to clothing labels, and Shaver continued to promote more designers.

In 1933, Vogue profiled Shaver and focused on “portraits of American designers” — “and this is all because of Dorothy Shaver,” Houtte said. “She is absolutely in this for the long haul.” The designers she promoted throughout her career include Lilly Dache, Claire McCardell, Pauline Trigere, Norman Norell and Bonnie Cashin.

In 1937, Shaver was promoted to first vice president of Lord & Taylor, directing the advertising, fashion promotion, public relations and display programs of the company. Asked once how she got along with men, Shaver said, “The best answer to that is that I have survived three changes of management and got a promotion every time.”

In 1945 — with “the American Look” firmly entrenched in fashion — Shaver became president of Lord & Taylor, a job she held until her 1959 death from a stroke at age 65.

In its May 12, 1947, issue, Life magazine proclaimed Shaver “the No. 1 American career woman.” The magazine described her office this way:

“Miss Shaver works at a $3,000 Chippendale desk. Her office is 27 feet long and 20 feet wide and has a fireplace at one end. The walls, of a pale unpainted pine, are from an 18th Century English study. There are costly Regency chairs, a massive Chippendale breakfront stuffed with books, a comfortable bright, striped sofa, trailing green plants and vases of flowers (‘I couldn’t live without plants and flowers’) and a powder room.”

Shaver never married or had children and lived with her sister Elsie in Manhattan until her death. Elsie died in 1981 at the age of 85. Both are buried with their family in East Memorial Gardens in Texarkana. Dorothy’s marker erroneously gives 1898 as her birth year, taking five years off her age and repeating a falsehood she apparently indulged in.

Shaver recognized that she had had good fortune in her life but knew that good luck was not enough to create a career. “One gets jobs in many ways, but what one does with them is the difference between success and failure,” she told one writer.

“She clearly was the model for women [being] capable of running major companies,” Houtte said of Shaver. In addition, “what she absolutely must get credit for is recognizing the first generation of women — mostly women but certainly men — fashion designers.”

Lord & Taylor itself died this year, a victim of the pandemic, the ongoing “retail apocalypse” and, no doubt, poor management along the way. It sells only online.