A court feud between the two men licensed as owners of one of the state’s top-selling medical marijuana dispensaries has ended.

The two men settled the Garland County Circuit Court lawsuit with Simpson, who was listed on state Medical Marijuana Commission documents as a 40% owner of the enterprise, being “fully and fairly compensated,” according to a statement released Wednesday evening by Ryan K. Culpepper of the Culpepper Law Firm LLC of Hot Springs.

In an email, Culpepper said the parties had agreed to make a joint statement and say no more about the matter.

“Dragan Vicentic and Bruce Simpson have resolved their differences,” the statement said. “Bruce Simpson has been fully and fairly compensated for his participation with Green Springs Medical LLC, and is moving forward to pursue other opportunities with best wishes for its continued success.”

As of June 8, Green Springs had sold 4,179.59 pounds of medical marijuana, according to state records. The dispensary, at 309 Seneca St. in Hot Springs, was second in total volume among the state’s 33 dispensaries only to the Releaf Center in Bentonville, which opened almost three months later, in August 2019, but has sold 5,249.22 pounds of cannabis.

Simpson filed suit in September 2019, saying Vicentic had barred him from the dispensary and denied him his share of its profits.

Vicentic, who has an auto dealership and other enterprises, was accused of cutting Simpson out after Simpson refused a buyout offer. In his answer to the court, Vicentic denied some of Simpson's allegations and alleged Simpson had made no financial investment in the dispensary and was presenting himself as a co-owner only because the permit application identified him as one.

A special judge, Ted Capeheart, came out of retirement to hear the case after Garland County's four circuit judges all recused themselves. Last year, Capeheart granted an injunction to allow Simpson back into the business, with access to its records and a voice in its business decisions.

Vicentic appealed the injunction, but in May, Judge Waymond M. Brown of the Arkansas Court of Appeals affirmed Capeheart’s ruling, adding to the likelihood of a settlement.

State officials took no position on the lawsuit, but made clear that the state considered both Vicentic and Simpson as owners. Simpson, for example, had a valid state-issued registry card allowing him to work inside the dispensary.

Scott Hardin of the Arkansas Department of Finance & Administration, which oversees the new medical marijuana industry's compliance with state rules, said the state holds no position on the Green Springs ownership dispute, but said both Vicentic and Simpson were listed as owners on the dispensary's state license application.

"As a result, ABC [the department's Alcoholic Beverage Control Division] issued registry ID cards allowing them access to work inside the dispensary," Hardin said, suggesting both men should be allowed in the facility.

"Absent a court order or joint resolution in which both owners agree to change existing ownership percentages, Mr. Vicentic and Mr. Simpson will remain on file at ABC as owners of Green Spring Medical," Hardin said at the time. 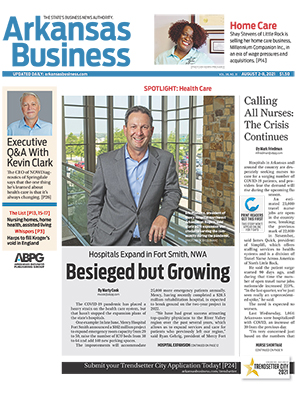