The first ripples of new residential projects are making the scene in the East End neighborhood of downtown Little Rock. Put in motion by John Burkhalter’s grand marina-apartment development on the Arkansas River, the construction activity features new faces joining the party launched by his Rock City Yacht Club and The Residences at Harbor Town.


“When we complete this, the infill will follow rapidly,” Burkhalter said of more projects expected to follow his $43 million development at 1726 E. Second St.

Split between two buildings, the first 48 apartments of the 176-unit Harbor Town project are leased. A third, 24-unit building is about to open after passing inspection.

In the next two months, another 24 units are expected to come on line along with the clubhouse and its three upper-story penthouse apartments.

Burkhalter hopes to have the three remaining buildings ready for lease by year’s end in a succession of monthly openings.


In the coming months, he intends to have a hand in developing more apartments, single-family homes and offices in the neighborhood south to Sixth Street. If he has his way, Burkhalter will rebrand this slice of downtown Little Rock as Harbor Town.


“I know they’ve pushed the East Village name,” he said. “But when people drive under the viaduct on Sixth Street, they will know this area as Harbor Town.”

It could be argued that Burkhalter earned naming rights after waging a decade-long battle to cut his way through a jungle of red tape followed by an epic flood and a global pandemic to bring the marina-apartment project this far.

“I admire him for his tenacity,” said Glenda Sakati, who added a new piece to the development puzzle.

Her 3,000-SF midcentury modern-style house at the northwest corner of East Third and Bond streets is owner occupied.

“I just moved in on Sunday [July 18],” said Sakati, group director of government resell programs for Oracle Corp., the computer technology giant based in Austin, Texas. “I’m in a sea of boxes.”

Real estate records indicate her recently completed residence is the first new home built since 1995 in the 20-block area north of Sixth Street between the Heifer International headquarters and Carver Magnet Elementary School. Prior to that, the last new home built in this section of the East End neighborhood dates back to 1987. 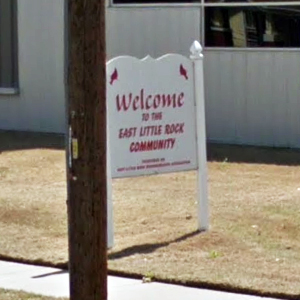 Cardinals, the mascot of nearby Carver Magnet Elementary, adorn a sign near Sixth and Bond streets promoting the "East Little Rock" community.

Rebranded as part of East Village, the area is sprinkled with industrial buildings and houses but dominated by vacant lots. And it’s the availability of building-ready land in an upward trending part of downtown that attracted Sakati.

“I had an opportunity to meet John and share our visions,” she said of Burkhalter. “He’s bringing such development potential to this corridor.”

Sakati started talking about building her home in 2019 and crafted the basic design with the aid of a draftsman. Construction started in July 2020 on a COVID-delayed timetable. Work is about to start on a neighboring 1,200-SF guest house to round out her project.

“I wanted to be on this particular site because of the beautiful skylines and access to the Arkansas River Trail,” Sakati said.

Her property backs up to the levee that will be crowned with a future biking-walking path that will extend the River Trail eastward.

“I was living in a rental condo downtown, and I started to search for property, which led me to East Village,” said Sakati, a Virginia transplant who has lived in Little Rock since 2016. “I initially was looking for an existing place, something modern but in the older part of town.”

Unable to find what she wanted, Sakati decided to buy land and hire a contractor to build. Attrition of 20th century houses over the years left the East End area dotted with plenty of empty lots.

The market value of the land has grown as new development has crept eastward from Interstate 30, anchored by the Clinton Presidential Library and Heifer complex. Sakati’s half-acre site on four lots required a $200,000 investment.

She believes other residents will be drawn by the blend of old and new in an urban location with the nature-filled backdrop of the river.

“I think there’s going to be an influx of like-minded people,” Sakati said.

A block east of Sakati’s homestead, a pair of new two-story residences has risen. Another pair of two-story houses should arrive by Christmas. The four rooftops are the first efforts in a planned string of new housing by local homebuilder Doug Woodall.

His Welcome Home Enterprises Inc. is developing the work-in-progress project on a 0.36-acre parcel assembled from five pieces of three lots at the southeast corner of Third and Bender streets.

A 2,100-SF three-bedroom dwelling is earmarked as an Airbnb destination. Possibilities for the neighboring 1,700-SF two-bedroom abode include affiliating with the local Ronald McDonald house program to provide temporary quarters for a family with a hospitalized child.

Workers are finishing out the interiors, and an in-ground pool will be installed between the two residential structures. A 1,000-SF house is on the drawing board, deeper into the property behind the future pool site. A concrete slab on the corner lot marks the footprint for a 1,200-SF residence, envisioned to be a more traditionally styled house.

A project is in the works to relocate the overhead utilities along East Third Street underground to provide unobstructed river views for new homes.

During the coming months, Woodall plans to roll out eight more new houses to sell or rent on a scattering of vacant lots nearby. He hopes the residential activity will ultimately result in restaurants and entertainment venues setting up shop in the neighborhood.

“We’d like to see that move this way,” Woodall said. “We want to be a hipster neighborhood.”

By his count, more than 120 vacant lots lie within the larger East Little Rock area, which extends south to Ninth Street and east to the Bill and Hillary Clinton National Airport.

Rusty Thompson, an investor in downtown Little Rock apartments, began dabbling in East Village property in 2019. During the past two years, he has acquired four lots and parts of three more in deals totaling $250,000.

“We want to get a nucleus of homes going,” Thompson said. “We’re just trying to get something stirring.”

“We got to know each other and are trying to work together,” Woodall said.

Burkhalter waded into his marina-apartment project with a $900,000 land purchase in 2006. Years of negotiating a multilayered permitting process required to build on a navigable waterway followed.

Working out the details and finalizing a land lease deal with the city of Little Rock became a three-year process. The 99-year lease agreement, dated Jan. 31, 2014, covers 4 acres on the western end of his property.

The leased land houses a boat repair shop, green space and parking for the public boat launch ramp. A downtown boat ramp has been on the city’s wish list for more than 55 years.

“Why would a guy put all this money into infrastructure on public land?” Burkhalter asks rhetorically. “It was just the right thing to do.”

Next year, he hopes to see the public park area dedicated and named for his parents, Frank and Loyce Ann Burkhalter.

A 100-year flood in 2019 delivered a surprise stress test to the marina that was still under construction, and that was followed by a construction timetable disruption courtesy of the coronavirus last year.

All told, the developable land covers about 16.5 acres, including the leased city property. When the apartments are finished, construction will shift back to the water.

Burkhalter hopes to start construction by winter on the dock store and restaurant space. The 8,000-SF floating foundation is already in place on the river and under roof.

The store should open next year, but given the uncertainty of the COVID-19 variable, the restaurant opening might be pushed back to 2023. Live music will be on the menu.

The eatery will be called the Wheels Up Bar & Grill with a Bahamian vibe with palm fronds and sporting a single-engine plane crashed through the roof. Yes, that is an homage to the gone but not forgotten Diego’s Hog’s Breath Cantina in Little Rokc’s Riverdale area.

“That’s where I got the idea,” Burkhalter said. “How cool will that be?”

Unlike the first six apartment buildings, the seventh will be four stories instead of three. Burkhalter plans to develop his personal retirement residence on half of the top floor.

“That’s how much I believe in this place,” he said. “Everything I’m building I want to be standing 100 years from now.”