Construction of a $16 million Courtyard by Marriott marks the start of a 52-acre commercial development in Conway. The 108-room hotel taking shape at the southeast corner of East Dave Ward and Thomas G. Wilson drives is the first of a dozen projects planned for the Maly District (pronounced Molly).


“It may be the largest new commercial project in Arkansas, and that’s exciting,” said Eric Holloway, owner of Holloway Engineering in Maumelle.

The four-story hotel rising from former pastureland starts a build-out tallied at $130 million. That figure could climb to $150 million if more apartments make the scene.

A 480-unit, five-story apartment project, estimated at $40 million, represents the biggest component planned for the Maly District. For now, this nearly 20.9-acre development in the southwest corner of the site is the lone multifamily project.

“The name of the apartments could be District Lofts,” said Dr. James Thomas, owner-developer of the Maly District. “We’ll decide on that when we get closer to construction.”

Thomas envisions the addition of as many as 198 more apartments scattered among three mixed-use commercial buildings, based on market demand.

Meanwhile, design work is four weeks away from completion on an $8 million entertainment center along a new interior road between Dave Ward and Thomas G. Wilson drives. The 55,000-SF project will be built on a 5.8-acre site in the middle of the Maly District. Developers aim to create a family attraction along the lines of Fast Lanes Entertainment but with a heavier mix of electronic gaming.

Next in line is a 172,575-SF event center on a nearly 4-acre site south of the Courtyard by Marriott. The $7 million project will have a capacity for 1,000 and a flexible configuration of partitions to accommodate smaller gatherings.

Supply chain disruptions caused by the pandemic delayed steel delivery for the hotel by three weeks, and the lag time for steel has grown to four months. But the goal is to have all three projects completed during 2022. 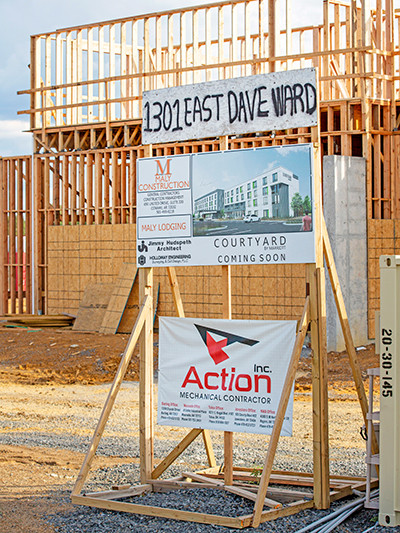 “That’s what the hope is,” Thomas said.

He hopes to attract restaurants, storefront offices and shops as the dominant features of four future buildings.

“We knew that retail wasn’t going to be the big part,” Thomas said of the development mix built around entertainment and apartments. “We want to create a destination center. With COVID, having green space was important.”

The viral outbreak inspired a heightened awareness of outdoor space, which influenced a key design element of the Maly District: a 1-acre green space in an outdoor plaza north of the entertainment project.

“It adds to the full entertainment value of the project,” said Holloway, who has worked with Thomas on the site plan, civil engineering and more. “You’re really creating something that feeds on itself. We have a lot of elements that will support that.”

The developers began construction with the 2.5-acre Courtyard by Marriott project to capitalize on the name of a well-known hotel.

“It has a brand name to it, so we thought it would be a good starting point,” Thomas said.

He is partnering with Arkansas hotelier Rajesh M. Patel, who will operate the hotel. Thomas plans a second hotel site south of the event center.

As for the non-hotel projects that make up the bulk of the Maly District, Thomas intends to maintain a family-only ownership position.

He bought the land in December 2013 for $3.2 million and weighed various development possibilities before moving forward. His consideration of the property dates back even further.

The Maly District isn’t the first commercial real estate investment for the Conway cardiologist, but it is his biggest to date.

Thomas developed a 46,224-SF office building on 2.5 acres at 650 United Drive in Conway in 2016. The project houses his cardiology practice, his wife’s family medicine practice and their Maly Construction venture along with a mix of medical-related tenants.

The property is part of an 8.8-acre site Thomas bought for $2.3 million in May 2013 near the Baptist Health Medical Center-Conway campus. He intends to build medical office space on the nearly 6.3 acres that remain.

Thomas rounded out his 2013 spending spree with the $3 million acquisition of a 12.7-acre parcel at the southeast corner of Harkrider Street and Tommy Lewis Drive. Thomas sold a 2-acre piece to the Arkansas Urology Group and expects to sell the rest.

Before commercial real estate, Illinois farmland captured his interest. He still retains a 155-acre farm in the Kankakee area.

“When the commodity prices were good, I got out and got into commercial property,” Thomas said.

He sold two 160-acre corn farms in Illinois as part of a tax-deferred exchange that landed him a 400-acre cattle farm between Plumerville and Menifee in Conway County.

“Real estate is something I’m interested in, land,” Thomas said.