Standard Lithium Ltd., the Canadian company helping to pioneer a lithium production industry in south Arkansas, announced early Wednesday a major investment with a big name associated with it: Charles Koch of the Koch brothers.

Koch Strategic Platforms, a subsidiary of Charles Koch’s Koch Investments Group, is making a $100 million direct investment in Standard. The lithium extraction startup, based in Vancouver, British Columbia,  has been testing the commercial viability of lithium extraction and refinement at test plants in El Dorado for several years.

The demonstration facility uses proprietary technology to selectively extract lithium from waters already pumped from Arkansas’ underground brine reservoir for bromine extraction by the German multinational corporation Lanxess, which has long had operations in Union County. Piggybacking on Lanxess’ existing infrastructure was one key to make the economics work in developing a domestic source for lithium carbonate, a key ingredient in lithium-ion batteries used in hand-held devices, laptops and electric vehicles.

The company plans to issue nearly 13.5 million shares of common stock priced at $7.42 each, U.S, and officials said the direct placement investment followed extensive due diligence into Standard’s technology, El Dorado's demonstration plant and other parameters of the project, which was first covered by Arkansas Business in 2018.

Standard’s plans for the investment include rapidly advancing toward a commercial project proposed for the Lanxess South plant in El Dorado, continuing to develop and commercialize modern lithium extraction, and expanding its strategic projects.

“We’re entering an important phase for Standard Lithium and we’re thrilled to be starting it with a globally recognized industrial leader like Koch Strategic Platforms as a partner,” Standard Lithium CEO Robert Mintak said in a statement.

“KSP has an impressive track record of investing in disruptive technologies, and their backing is an important endorsement of the Company’s core technology, development plans and of our intent to make the Gulf Region a leading supplier of lithium resources.”

David Park, Koch Strategic Platforms’ CEO, said in the release that his firm “is focusing on investing in companies with strong tailwinds that are disrupting the market as we know it.” He praised Standard Lithium “as they pave a path forward towards lithium production here in the U.S.,” adding that he expects the investment to “help accelerate the production of lithium resources right here at home.”

The release listed several examples of how the investment might align nicely with several businesses in the Koch group. Potential synergies, the companies said, could include process solutions for commercialization technologies from Koch Separation Solutions; engineering and development oversight from Koch Project Solutions; engineering, procurement and construction services from the Optimized Process Designs group; and raw materials assistance with future lithium offtake agreements from the KM&T group.

Public Companies
Walmart CFO Brett Biggs to Step Down in 2022 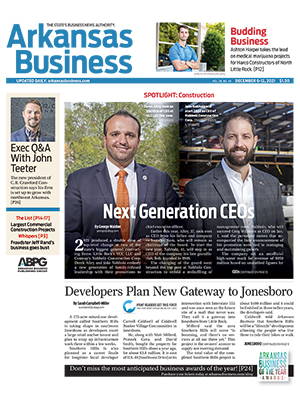