As Fort Smith moves into the future, it is relying on its strong and significant ties to its past.

Editor's Note:
This is the latest in a series of business history features. To suggest Fifth Monday subjects, email Lance Turner.

Much of the commercial and residential growth in the River Valley has come from the area’s economic hot spot: Chaffee Crossing. In 2021 alone, the Fort Chaffee Redevelopment Authority that oversees the management of Chaffee Crossing reported a record of $5 million in property sales and $430 million in projected capital investments.

The boom times are apparent at the site of the former U.S. Army base that was once a linchpin of the area’s economy and culture. It has been a long time coming for Fort Smith and the surrounding communities.

“It’s a fun time,” said Daniel Mann, the executive director of the FCRA. “There is a lot of momentum.”

Technically, Chaffee Crossing is divided between Fort Smith, the state’s third-largest city, and Barling, a city of fewer than 5,000 a few miles down Highway 22 to the southeast.

That means the FCRA staff and board of trustees work with both cities in the development and the execution of its land-use plans.

Chaffee Crossing started as an undeveloped 7,100 acres, the site of old Army barracks and other buildings, with no definitive plan on what to do with the property.

When the U.S. Department of Defense decided to close Fort Chaffee in 1995, there was worry about how it would affect the area’s economy. The fort was well past its heyday when it trained mechanized armor units for World War II, but, even so, there were more than 300 jobs tied to its use as a military Joint Readiness Training Center.

The federal government handed 7,100 acres of the fort’s property over to the state, declaring the acreage surplus. It leased the remaining 66,000 to the Arkansas National Guard, which still uses it for training.

To manage the 7,100 acres, the state Legislature in 1997 created what is now known as the FCRA. Today, the FCRA is overseeing the rebirth of the property, with mixed-use projects, hundreds of homes and even a movie studio on the drawing board.

It’s not easy to take possession of 7,000 acres and do something with it right away.

What the FCRA wanted was to create a planned community that included industrial and commercial entities, housing developments and retail space. Like a jigsaw puzzle, the organization wanted each development to complement the other.

That is much easier said than done.

The first major investment came in 2004 by a Georgia company that had a facility already in Fort Smith.

Graphic Packaging needed to expand and had a tempting offer from Monroe, Louisiana, when the FCRA and the state were able to entice it to build a $42 million, 300,000-SF plant in Chaffee Crossing.

Other projects followed, most of them small, but large developments began to make the news.

Mars Petcare of Franklin, Tennessee, invested $80 million for a facility that would employ 200. It announced additional expansions in 2016 and 2021.

ArcBest Corp. of Fort Smith announced in 2014 it would build its $30 million headquarters in Chaffee Crossing; while the price tag is modest, the 1,000 jobs it brought to the area were not.

The same year, the FCRA donated 200 acres to the Arkansas Colleges of Health Education for the site of a new osteopathic medical school, which had an initial startup investment of $72 million. The school brought hundreds of students, faculty and staff to the area, which spurred student housing developments.

‘There Is No Comparison’

One of the most active homebuilders in Chaffee Crossing is ERC Holdings of Fort Smith. ERC Chairman Rod Coleman grew up in Fort Smith and used the grounds of Chaffee Crossing as his playground as a child; his father, Buddy, was the first chairman of the board of the FCRA.

Coleman believes in the Chaffee Crossing idea and has put his company’s money where his faith is. Groundwork is underway on Phase 2 of ERC’s Alianna at the HUB subdivision, part of 140 acres ERC is developing in Chaffee Crossing; it has 60 more acres for future plans.

When all is said and done, Coleman said, his company will have built 750 single- and multifamily units in the area. Coleman said it is heartening to see Fort Smith and the River Valley thriving after lean years following the closing of a Whirlpool plant in 2012.

“We are moving things in a new direction in Chaffee Crossing,” Coleman said. “Fort Smith has turned a corner and since it has turned that corner, we have seen some great things happen. Fort Smith is doing some things they have wanted to do for years.

“We have just been northwest Arkansas’ stepbrother for years and people compared us. There is no comparison. Fort Smith is Fort Smith.”

“It’s the chicken and the egg,” Mann said. “As you build it, those higher value real estate development sites start to have interest.”

When the Army abandoned the fort, much of the 7,100 acres was occupied by old barracks and other military buildings, many of which were used over the years to house refugees from the Vietnam War, Cuba and Hurricane Katrina.

A 2008 fire destroyed more than 150 buildings. But a batch of barracks remained, ones with a nostalgic hold on developer Lloyd Sumpter.

Sumpter, a former member of the Oklahoma Army National Guard, trained at Fort Chaffee. When he got a chance to buy 21 former Army barracks in the Crossing’s Historic District, he scooped them up and impressed the FCRA with his $20 million plan to repurpose them as mixed-use buildings with 30 retail spaces and 90 apartments; it will be called The Barracks at Chaffee.

“I spent a lot of time here,” said Sumpter, the owner of Rival Commercial Real Estate in Fort Smith. “With the history of Chaffee and all the things that happened here, I wanted to restore them. My vision was to take the original buildings and create an outdoor shopping center.”

Part of Fort Chaffee’s history is more celebrity-oriented, and nowhere is that more apparent than at the Chaffee Barbershop Museum. It is where Elvis Presley got his first GI haircut after being drafted in 1958.

In 2008, the FCRA started a Haircut Day celebration every March 25 where student barbers give Elvis fans a GI haircut. It was popular with Presley devotees before the COVID-19 pandemic closed the show two years ago.

Sumpter plans to have artists paint murals honoring the fort’s military history on the side of each refurbished barrack.

“They created a war machine and these buildings represent that,” Sumpter said. “Everybody knows that Elvis got his haircut here, but not many people know that Charley Pride went to boot camp here. We want to honor the history.”

‘The Importance of Quality’

Mann said the FCRA has about 1,000 acres left to divest, which he estimates will take up to five years.

The Arkansas Department of Transportation announced Jan. 7 it would start work this fall on a 13.5-mile stretch of Interstate 49 that runs through Chaffee Crossing and includes a bridge over the Arkansas River. That will make portions of the Crossing’s remaining properties more accessible and attractive.

Mann said if the FCRA wanted to, it could sell all the properties quickly and for a nice profit. But the goal of the FCRA is not to be quick but to be meticulous, Mann said.

Each project is reviewed by committees to make sure it complements other existing or proposed projects. Construction rules require high-quality and sustainable materials, and the FCRA has the ability to reacquire property that isn’t developed.

“I love that the [FCRA] has all of those things we have to do,” Coleman said. “I think it places the importance of quality on the people of Fort Smith versus quantity.

“I absolutely believe in this area. I’m 64 and I’ve been here for 62½ years. I believe in Chaffee and it is going to change the dynamics of Fort Smith forever. Elvis is important, but there is a lot of other stuff going on here.”

1942
German prisoners of war are held at the camp. 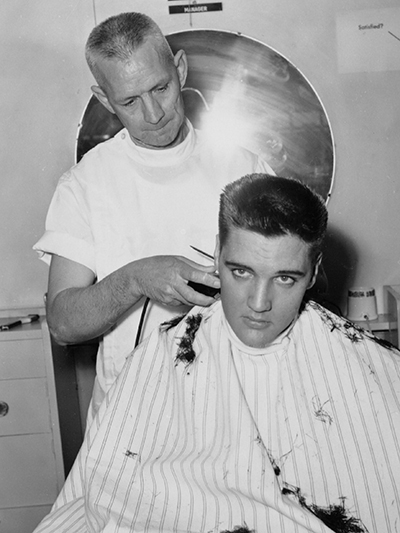 1958
Elvis Presley gets his hair cut at the fort after being drafted into the U.S. Army.

1975
The fort is used to house refugees from Vietnam and Cambodia. 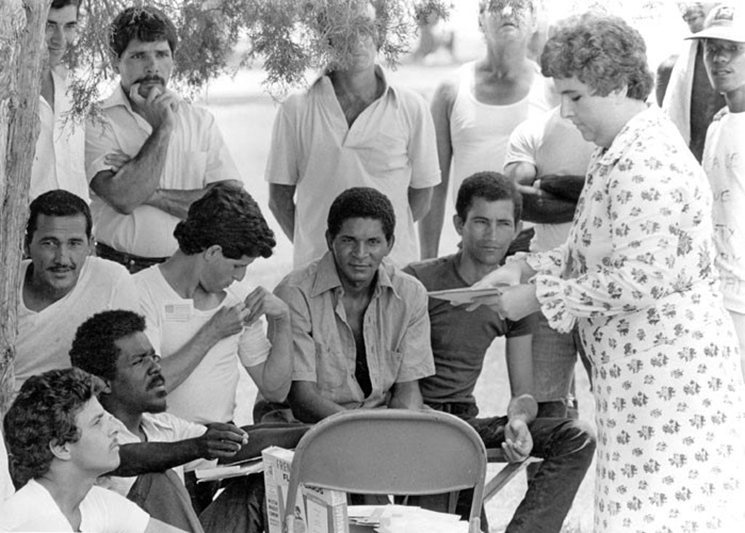 Courtesy of the FCRA

1980
The fort is used to house refugees from Cuba. In June a group of the refugees riots.

1983
The movie “A Soldier’s Story” is filmed at Fort Chaffee.

1987
The movie “Biloxi Blues” is filmed at Fort Chaffee.

1997
The remaining 66,000 acres are turned over for lease to the Arkansas National Guard. 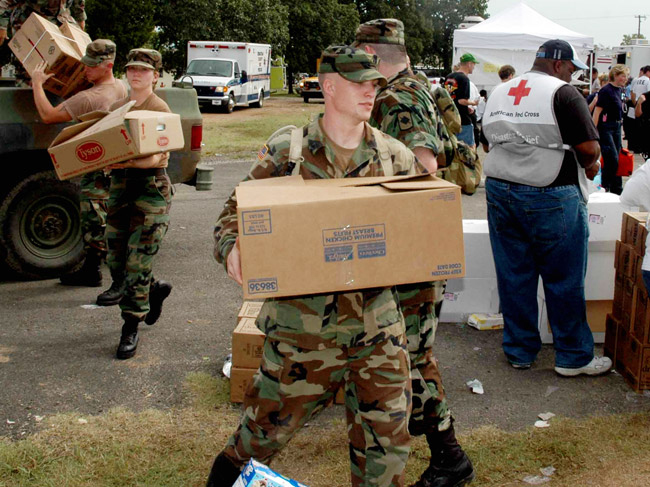 2005
Refugees from Hurricane Katrina are housed at Chaffee Crossing.

2011
Chaffee Crossing’s Historic District is recognized by the National Register of Historic Places.

2022
The Arkansas Department of Transportation announces it will begin construction on a 13.5-mile stretch of Interstate 49 running through Chaffee Crossing later this year.