The allure of Texas is drawing the attention of more Arkansas banks. That increased attention is especially evident among some of the state’s largest lenders.

Of the three Arkansas publicly traded banking concerns, Home BancShares Inc. of Conway, the parent company of Centennial Bank, made the last and loudest move into Texas.

“It’s not that we haven’t been interested in Texas or paying attention to it,” said Tracy French, president and CEO of Centennial Bank, which has $18 billion in assets. “The interest has always been there.”

Announced last year, the $919 million stock-swap acquisition of the Happy State Bank franchise will put Centennial Bank at the forefront of Arkansas banks on the ground in Texas.

The $6.8 billion-asset Happy State Bank operates across a 35-county footprint, heavy on Panhandle markets both small and large with Amarillo and Lubbock at the top of the list. Happy’s reach extends southeast to Austin, New Braunfels and Fredericksburg in central Texas and eastward to the Dallas-Fort Worth area.

French described the Happy purchase as an efficient and effective way to enter Texas in a big way.

Much like the land area differential between Arkansas and Texas, so too is the size of the two states’ bank markets.

Total bank deposits in Arkansas top $94.5 billion. In Texas, the tally of deposits in Dallas County alone is $297 billion.

Simmons First National Corp. of Pine Bluff assembled its Texas franchise through a series of acquisitions that began in October 2017 with the $462 million stock swap-cash deal for Southwest Bank of Fort Worth and its 16 full-service locations.

In July 2019, the parent company of Simmons Bank added seven Texas branches north of Dallas as part of the $434 million purchase of Landmark Bank of Columbia, Missouri.

The pending $581 million purchase of Spirit of Texas Bank in College Station encompasses 38 banking offices that include San Antonio, Austin and the Houston metro area.

Beyond the swath of new Texas locations, the deal is expected to make Simmons the largest bank based in Arkansas, with total assets of more than $28 billion. Simmons’ Texas moves are part of a 2013 expansion plan to enter new markets of opportunity such as the metro areas of Oklahoma City, St. Louis and Nashville, Tennessee.

“We were successful in buying banks in those growth markets, and we’ve not been disappointed,” said George Makris, chairman and CEO of Simmons.

“The migration from the coasts to the Dallas-Fort Worth area is even more attractive to us now. We just see that as a long-term play for growth for our company.”

Among the current lineup of Arkansas banks in Texas, Bank OZK of Little Rock has the longest presence. Its loan production office in Frisco developed into a full-service branch in June 2004.

That start in Texas has blossomed into five loan production offices and 23 full-service locations, home to more than $2.3 billion in deposits.

“We saw it early and benefited from it early,” George Gleason, chairman and CEO of Bank OZK, said of Texas. “It’s been a very important market for us, and our expectation is it will continue to grow in importance.”

The $26.5 billion-asset lender built its Texas franchise largely through branch development. It augmented that organic effort in March 2014 with the $21.5 million purchase of Bancshares Inc., the parent company of the $301 million-asset Omnibank in Houston.

“The Texas economy has become more and more robust,” Gleason said. “That has created an increased interest in being in Texas.”

Like Bank OZK, Farmers Bank & Trust of Magnolia deployed a combination of branching and buying to grow its Texas footprint.

Farmers began with a branch in Texarkana in March 2012 and followed that by purchasing the $331 million-asset 1st Bank of Texarkana for $31.8 million in January 2015.

Since then, Farmers has pushed deeper into east Texas by developing branches on the northern edge of the Dallas-Fort Worth market in Prosper in October 2016 and Paris last year.

“Out in Texas, we have just found that markets are dominated by bigger banks and that we can apply the community banking model, and it’s really been well received,” said Chris Gosnell, president and CEO of Farmers Bank & Trust.

“We push a personal banker approach. When we come in, we put money and volunteer hours back in the community, and we have the technology piece that bigger players have.”

Gosnell said that although there are more lenders vying for business in Texas, Farmers’ responsive, community bank platform is playing well.

“There’s more loan demand from borrowers who aren’t as rate sensitive, and frankly, there’s not as much competition, as strange as that sounds,” he said. “Customers can get a loan approved in two weeks with Farmers, while it’s more of a lengthy process with other lenders.”

Three Arkansas banks doing business in Texas haven’t ventured on the acquisition trail to pursue their Lone Star State aspirations. Instead, Encore Bank of Little Rock, Bodcaw Bank of Stamps and Diamond Bank of Murfreesboro have opened new branches there.

Korey Keith, president and CEO of the $168 million-asset Bodcaw Bank, said the full-service Texarkana branch it opened six months ago isn’t part of a strategic expansion in east Texas.

“Right now, we don’t have plans outside of that,” Keith said. “Texarkana is kind of a regional hub for southwest Arkansas, and we have a lot of people who do business there. It just made sense to go over with a team and open an office.”

Last year, Encore Bank began a rollout of four Texas offices in Austin, Dallas, Fort Worth and San Antonio. Arlington and Plano are on the drawing board for 2022.

Diamond Bank opened its one Texas branch in Texarkana in July 2017. 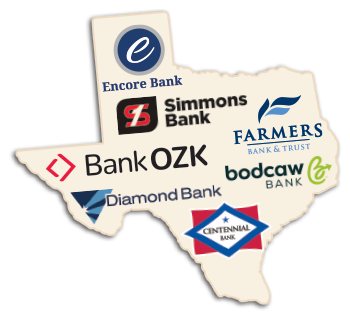 ★ Diamond Bank of Murfreesboro opened a Texarkana branch in July 2017

★ Bodcaw Bank of Stamps opened a Texarkana branch in September 2021

Lenders from 25 states are among a competitive field of 487 banks with offices in Texas, a $1.5 trillion-deposit market. That headcount represents a serious dose of consolidation and influx of new players compared to 1994.

Back then, there were 1,061 banks in Texas. Only three of those lenders were headquartered outside the state. None was from Arkansas.

Arkansas banks did make earlier forays into Texas. The first deal dates back to 1987 when the regulatory landscape was shifting to allow interstate bank deals.

His 2018 obituary noted that as CEO of State First National Bank, “he negotiated the first interstate bank merger in Texas.”

In 1988, a Little Rock bank holding company formed Union National Bank of Texas. A subsidiary of The Union of Arkansas Corp., the Austin bank was built on the bones of the failed BancFirst Westlake.