Clif Chitwood is the James Michener of economic developers.

What does that mean? Michener was a best-selling author famous for his fictional sagas centered on a particular locale. They didn’t go back just generations; they went back eons. Michener’s novel “Hawaii” begins with the islands rising from the sea.

Chitwood’s knowledge of Mississippi County’s history may not extend to the Paleozoic era 500 million years ago when Arkansas was covered by a vast ocean, but it goes back aways, and that’s important. He knows why people came to a place, why they settled there, and why they left.

People come for jobs, and Chitwood has led the way in helping attract those jobs to the county, many of them steelmaking jobs. But they stay, they settle, for other reasons — family, school, community — and with northeast Arkansas’ success in bringing jobs and the workers to fill them, he’s now seeking to keep those workers in the area.

That’s because in addition to knowing the region’s history backwards and forwards, Chitwood is self-deprecating and funny and good for a quote. Speaking of his career in the early 1990s, he said, wryly, “I farmed for a few years until my bankers suggested perhaps I should look for alternative sources of income.”

Or this, in discussing what the area, particularly Blytheville and Osceola, would look like had efforts to attract industry not been successful: “Had the people not responded so vigorously to the challenge they faced, well, we wouldn’t even be a smoking hole in the ground because smoke requires energy. We would just be a hole in the ground where two communities used to be.”

Chitwood’s father, a World War II veteran with a degree in agriculture from the University of Arkansas, had moved from Mulberry (Crawford County) to Osceola after the war, and though Chitwood was born in Memphis, three days later the infant Chitwood was back home in Osceola.

Chitwood also attended the UA, graduating in 1972 with a degree in business and finance and going to work with his father, which he did until “the mid-1980s, when the farm economy went through one of its periodic downturns,” he said. “Massey-Ferguson developed a terrible habit of taking bankruptcy about once every six months, which did not endear them to the large-scale capital-intensive farming and farm operators such as is done in Mississippi County.”

Sensing that a career in farm equipment would not “see me out the rest of my working life,” Chitwood took a job at the UA as a development officer, primarily to raise money to restore Old Main.

In 1991, he came back to Mississippi County, farming for a few years until his bankers urged him to rethink his career choices. That’s when he took a job, in 1997, as the redevelopment officer for Eaker Air Force Base near Blytheville, which closed in 1992, one of a number of military base closures stemming from the winding down of the Cold War. 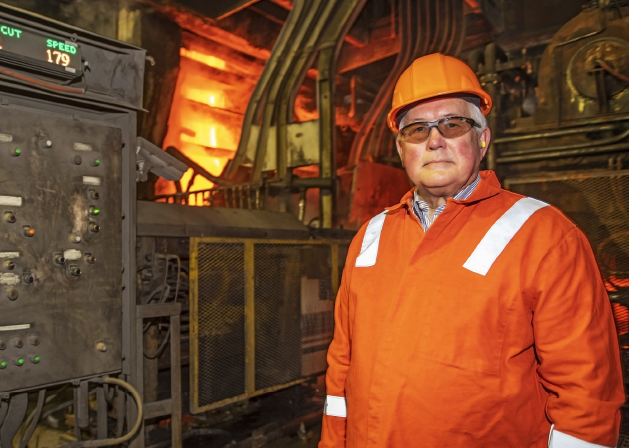 And though Nucor-Yamato Steel had opened a mill in the area in 1988 and Nucor Hickman opened in 1992, the closure of Eaker meant the loss of 700 civilian jobs and was a gut punch to Mississippi County. It would not be the only one.

In 2001, Chitwood was hired as economic developer for the county. “At that point, the communities of Blytheville and Osceola, who had waged war perhaps only rivaled by that of Sparta and Athens, decided to lay down their animosity and combine their economic development efforts in order to lay out as broad a smorgasbord of site possibilities and locations as was possible,” he said.

Reality had trumped rivalry. The county lost 9,000 direct jobs in the 1990s and early 2000s, Chitwood said, as companies like Fruit of the Loom, which had declared bankruptcy, and others like wire and cable manufacturer Southwire closed their plants. Chitwood’s job was to get some of those jobs back.

The loss of the jobs was “devastating,” he said. “It took most of the aughts for us to even comprehend how terrible the devastation would be because not everybody left at once.”

At this time, in the early 2000s, Osceola was seeking to attract Japanese auto parts maker Denso Corp., and Blytheville was hoping to land a Pella Windows project, Chitwood said. Kennemore had placed some of the profits from the city-owned power company, Osceola Municipal Light & Power, into a special fund to help the city win an industry. Blytheville “did not own their power company and did not have a reserve like that,” Chitwood said.

“In the end we won Denso because we were able to purchase the land for them, pay for the land preparation, and we lost Pella because a community in Tennessee had an economic development organization much like we now have, and they owned a half-million-square-foot building that they could gift to the company.

“So in that moment we learned that Cyndi Lauper was correct: Money changes everything.”

Area political leadership appealed to the voters, asking them to pass a countywide half-cent sales tax to be devoted to recruiting industry. Voters approved the tax in 2003 and extended it in 2011 and again in 2021. “Since that time, we have played our part in the regaining of roughly 5,000 jobs of the 9,000 that we lost,” Chitwood said.

And among the big wins in recent years have been Big River Steel and now industry giant U.S. Steel.

Chitwood is quick to share credit for regaining the jobs, saying, “It has been a long-running, community-supported effort.”

‘He Looks to Make a Difference’

Dan Brown is senior vice president of advanced technology steelmaking and chief operating officer of Big River Steel Works, now owned by U.S. Steel. He was transferred to Osceola a year ago, and within the first week, Chitwood had reached out to him, giving him the history of Big River. “But Clif had gone all the way back 40 or 50 years as to what used to be in the area, different types of industry that had come and gone,” Brown said.

What he has observed is that “Clif keeps up with the times and the economy and what makes things work for the community,” Brown said. Chitwood “keeps the people and the community in mind first and foremost, and he looks to make a difference in the area he grew up in.”

Although he’s in his first term as Mississippi County judge, John Alan Nelson has known of Chitwood “all my life,” he said. Nelson was on the Quorum Court when Chitwood was named the county’s economic developer.

“He really came out of the gate doing a great job in those very, very early days,” Nelson said. “He knew very little or nothing about economic development and they had no money. He has come a very, very long way.”

As for the emergence of Mississippi County as the nation’s leading steel producer, “It was under his leadership,” Nelson said of Chitwood. “He was the one who has led the way.”

But bringing jobs to Mississippi County, even high-paying jobs like steelmaking, isn’t sufficient to stem the county’s population decline, which has continued. Its population dropped from 46,480 in 2010 to 40,685 in 2020.

“People want new families in new homes,” Chitwood said, and that’s been a struggle. Many steelworkers, often young, have shifts of four 12-hour days on and then four days off, and so rather than moving themselves and their families to northeast Arkansas, they live in temporary housing during their workweeks only to return home as far away as Tulsa. That’s why the “Work Here, Live Here” initiative is important.

Chitwood said under the program companies would be asked to contribute to a nonprofit community foundation called Grow Mississippi County, “which will allow them, through the foundation, to offer their employees 10% off the price of a new home built anywhere in Mississippi County if they stay with that company for four years, and that’s so the company has a chance to develop loyalty with that employee.”

But there is momentum in the county. “We are the fastest-growing steel center in North America and that’s going to continue,” Chitwood said.

As for his legacy, “Well, I want it to be a Mississippi County that weathered a storm, a true economic catastrophe, and saw itself on the road to recovery.”