Saline County will receive a $1 million grant to restore the historic Saline River Bridge near Benton as part of the bicycle and pedestrian trail. The project will be matched with $250,169 in local funds.

Garland County will receive a $1 million grant to construct its portion of the Southwest Trail. The project will be matched with $250,000 in local funds.

Federal funds come from the $1.9 trillion American Rescue Plan, which all of Arkansas' congressional delegates voted against.

"President Biden knows that the travel, tourism, and outdoor recreation sector is a critical driver for our nation’s economy," Secretary of Commerce Gina Raimondo said in a news release. "These EDA investments will create new tourism destinations across the state of Arkansas, attracting new visitors to the state and providing opportunities for businesses to grow and thrive." 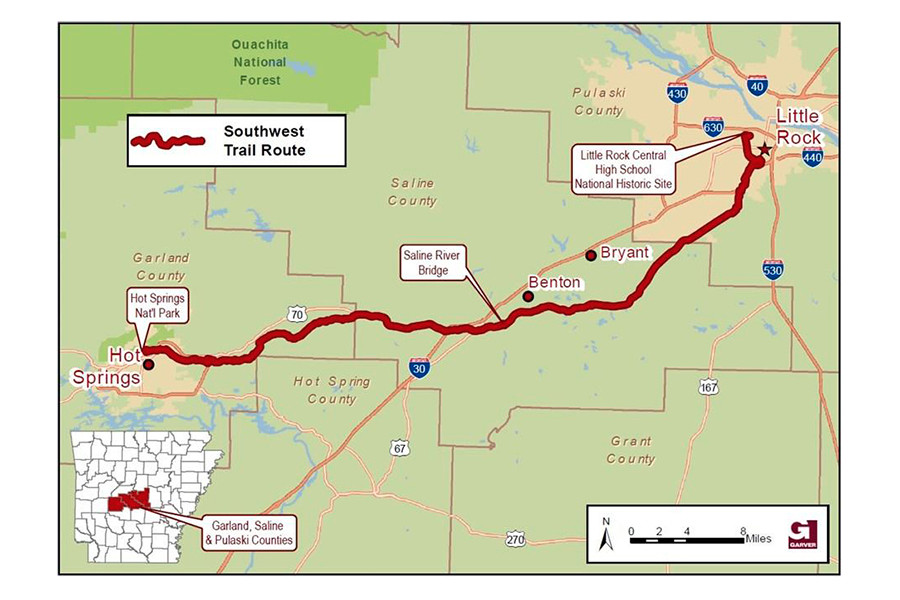 The Southwest Trail was first proposed in 2013. Planning and initial work, funded by grants, began accelerating 2018. Metroplan, the long-range transportation planning agency for central Arkansas, announced last year that it had approved more than $5.2 million for the project through its Surface Transportation Block Grant and Highway Improvement Programs.

The project is foreseen as a central Arkansas piece of a bicycle tourism boom already altering northwest Arkansas.

"This investment will enhance our efforts to preserve Arkansas’ story and conserve our natural resources for Arkansans, and further strengthen our tourism industry, which attracts hundreds of thousands of visitors who travel here from other places every year," Gov. Asa Hutchinson said in the release.