Lynn Hamilton joined the Arkansas Democrat at 26 in 1974, just after it was bought by the man who was his boss for the next almost 48 years, third-generation publisher Walter Hussman Jr.

Hussman was 27, recently called home to Arkansas from Forbes magazine to run the family newspaper and cable TV chain.

“He was hiring people his own age,” said Hamilton, 73, who’s retiring as president and general manager of Arkansas Democrat-Gazette Inc. at the end of the month. “That’s just one way that I’ve been lucky in my career.”

Through decades of big headlines, a huge antitrust case victory and a long newspaper war that required constant business innovation to avoid annihilation by the venerable Arkansas Gazette, Hamilton was at Hussman’s side — since 1979, in senior leadership roles. His last and greatest contribution was helping Hussman and other managers shift to Sunday-only print delivery while providing iPads for subscribers to read a digital replica. The move slashed production and distribution costs and has positioned the paper for survival in the online news world, Hamilton said.

But it was a paperboy’s thrill at seeing his first printing plant more than 60 years ago in Fresno, California, that put printers’ ink in his veins. “A new carriers’ tour of the Fresno Bee’s offices included a view from above the large printing press, which wasn’t running at the time,” Hamilton told Arkansas Business last week. “I was intrigued and puzzled how this huge assembly of large metal pieces could somehow produce a newspaper.” Then he won a trip to Disneyland by selling more subscriptions in a week than any other carrier in Fresno.

“Years later, of course, I was in charge of installing and running printing presses, and newspaper subscription sales became an important part of my career.”

Born Sept. 11, 1947, to an Arkansas-born janitor, Arch Hamilton, and an Oklahoma-born teacher, Hamilton was the baby of the family. He joined brother Clay’s fledgling data processing business in Little Rock after graduating from Roosevelt High School in Fresno in 1966. He took a bachelor’s degree from what is now the University of Central Arkansas and spent three years in the Navy before joining Hussman. An MBA from the University of Arkansas at Little Rock followed.

Starting in October 1974, Hamilton was data processing manager for Wehco Media Inc., the Democrat-Gazette’s parent company. “He did an outstanding job with that,” Hussman said in his paper earlier this month. “He’s done an outstanding job at everything he’s done.”

A Court Battle, a News War

Asked for career highlights, Hamilton first named March 26, 1986, when a federal jury in Little Rock found the Democrat not guilty of antitrust violations in a multimillion-dollar lawsuit brought by the rival Gazette. “It meant the newspaper war would go on. We had lived to fight another day,” Hamilton said, adding that a guilty verdict would have closed the Democrat.

Instead, Hugh Patterson and his family quickly sold the Gazette to the Gannett chain of Virginia for $51 million and assumption of $9 million in debt.

The chain went on to lose $118 million in Little Rock over five years of competition with the privately held Democrat, which limited its losses to perhaps $2 million or $3 million a year during the Gannett years and rode out the tide as “Arkansas’ Newspaper.”

“No day was bigger than October 18, 1991, when the newspaper war ended after 17 years,” Hamilton said. He had to tell employees at the Gazette printing plant that Gannett had shut their paper and sold Wehco all its assets, from the plants and buildings right down to the furniture in the newsroom, for $68.5 million.

The printers cheered Hamilton when he announced they would all be offered jobs.

“The Democrat managers who went to the Gazette offices at Third and Louisiana had a different experience. We couldn’t make the same offer there.” Some of the nation’s best reporters, editors and sportswriters carried their careers out the door in cardboard boxes.

Hamilton stood in the shadows of the Gazette Building while employees and loyal readers held a candlelight vigil for the paper, which dated back to 1819 — “the oldest newspaper west of the Mississippi” and an admired Pulitzer winner for its coverage of the 1957 Little Rock school desegregation crisis.

“I locked the doors [of the darkened Gazette Building] when everyone left,” Hamilton said. He recalled no celebrating at the Democrat, but of course there was some. A picture of the winners’ newsroom shows applause and hands raised in jubilation.

“The emotion we felt was mostly relief,” Hamilton said.

The first Democrat-Gazette came out the next day.

Hamilton gives credit for the iPad program to Hussman, Wehco CEO Nat Lea, Wehco Newspapers President Mark Lane and to Larry Graham, vice president of circulation. “Walter has overstated my role,” he said with modesty, but he added the initiative, completed in January 2020, “created a sense of pride and hope for the future in a bleak era for journalism.”

About 35,000 subscribers now paying $36 a month sustain the paper, reading the digital version on weekdays and getting a Sunday paper delivered. That’s a small fraction of the nearly 140,000 subscribers the paper had in 2014, but enough to keep it nominally profitable, Hamilton said, adding, “The entire newspaper industry is watching the outcome” of the digital replica experiment.

When he leaves, Hamilton said, he’ll be vacating the very Capitol Avenue office where Hussman first interviewed him in 1974. “My desk and chair today sit where Walter’s did so long ago.”

Hamilton is grateful to think his career followed a mission. “I was proud to work for what is without doubt the best newspaper of similar size in America today,” but now he’s ready to watch a fourth Hussman generation take over.

“Unlike most newspaper publishers, the Hussman family has positioned the Democrat-Gazette for the long run,” he said. “Nat Lea has played key roles for over 20 years in various newspaper and cable television positions.” Lea is a nephew of Hussman’s wife, Ben.

“His steady and strong hand assures a continuing commitment to high-quality journalism beyond Walter Hussman’s active years, and then someday when Nat is ready to pass the baton, Eliza Hussman Gaines, now executive editor of the Democrat-Gazette, will be available to lead the entire company. The state of Arkansas and Democrat-Gazette employees in particular stand to benefit. It’s not unthinkable that one of our young staffers today may end up with a career as long or longer than mine.”

Why now? Hamilton said he wanted to retire before losing his edge.

“I was 65 years old in 2013 when I was promoted to my present position [as company president], but I felt 55 or maybe even younger. Today at nearly 74, I feel every one of those years. My work relationships are still important to me, but my abilities are on the downhill side of their peak. The normal effects of aging are taking their toll. I’m leaving while the peak is still not too far in the past.” 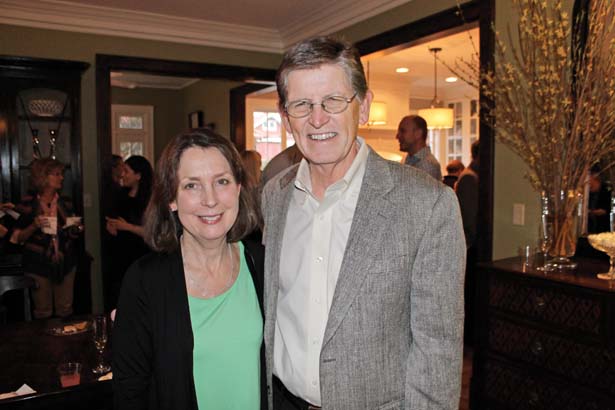 In retirement, his centerpiece will be the vintage 1918 Little Rock home he and his wife, Betti, moved into in 2005. “The projects I said I’d do 17 years ago will finally get done,” he joked, noting an irony. His house was built by J.N. Heiskell, who published and edited the Gazette for 70 years before retiring at 99; he died at 100.

In retirement, Hamilton will still be around scoops: Betti trains the couple’s two standard poodles on a 1.3-acre lot, and Lynn keeps it tidy. “She’s the trainer. I’m the groundskeeper,” Hamilton said.

He’ll have more time with his eight grandchildren, and he plans to dust off his road and hybrid bicycles. “I’m also in a book group that meets at First United Methodist Church,” Hamilton said. “I’ll actually have time now to read the weekly assignments.”

And his golf game?