The $2 billion-asset lender intends to open full-service locations in Rogers and Joplin, Missouri. The leased quarters in Suite A-124 at 5100 W. Park Ave. in the Pinnacle Hills area of Rogers will mark the bank’s first office in northwest Arkansas.

The office will increase the census of banks in Rogers to 23. The three largest stakeholders in the $2.9 billion-deposit market are Arvest Bank of Fayetteville at $1.1 billion, 38.4%; First Western Bank of Booneville at $200 million, 6.8%; and Generations Bank of Rogers at $176 million, 6%.

“It will take us about 60 days to do some minor construction work, and we should be finished by about mid-October,” said Dale Cole, CEO of First Community.

The office will increase the bank’s presence in southwestern Missouri to five offices. First Community operates two locations in Neosho and one each in Goodman and Pineville.

The only other Arkansas bank on the ground in Joplin is Pine Bluff’s Simmons Bank, $140 million, 5.52%. That ranks No. 7 among 13 banks with offices there.

Back to First Community: The bank is looking to October for the grand opening of its Chenal office in west Little Rock.

“We went over $100 million in loans recently, and deposits are up to $60 million,” Cole said of the bank’s Little Rock operations. “So the bank is gaining traction and doing well.” 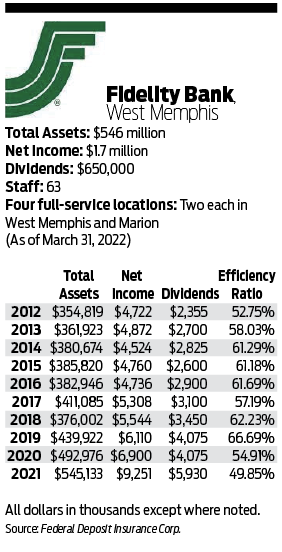 Fidelity Bank of West Memphis is making its first branching foray outside of Crittenden County. The $546 million-asset lender is venturing 41 miles west to open an office in Wynne.

The bank will develop a ground-up facility on a 2-acre site at 1015 U.S. 64 purchased for $209,000 in March. The move will expand the competitive field of banks in Wynne to six.

First Financial holds deposits of more than $169 million, 45.35% of the Wynne market.

Fidelity recorded net income of $1.7 million during the first quarter of 2022. A year ago, the bank’s first-quarter profit totaled $1.5 million.

Supported by a staff of 63, Fidelity operates four full-service locations: two each in West Memphis and Marion. The bank was established as Fidelity National Bank in November 1966 and changed its name three years ago along with a federal-to-state-charter conversion.