Arkansas farmers generally let nobody dictate what they can do with their land, be it planting soybeans, rice, cotton or nothing at all.

These days, that independent streak extends to planting solar arrays.

“Farmers who own their land have seen fit to convert it to whatever is best for their business and their family,” said Mark Isbell, a fourth-generation partner in a 3,500-acre family rice operation in Humnoke that installed a farm-use solar system in 2018. “I would certainly support them in that, and I believe solar was the right choice for our farm and our business.”

Isbell said solar power fits in with a family farming tradition of innovation and conservation. His father, Chris, pioneered growing sake rice in America and produces table rice with water- and carbon-conservation methods inherited from his father, Leroy Isbell.

Farmers and Arkansas solar developers are defending a boom in agricultural solar these days as the Russian invasion of Ukraine threatens world grain supplies and sun power awaits new incentives from the Inflation Reduction Act.

While solar power is seen as a crucial part of the answer to climate change, it’s not universally applauded in farm country. Andy Vance of Farm Progress in Bexley, Ohio, summed up the major objections a year ago on cable’s SpectrumNews1. Despite its large footprint per kilowatt, solar projects are “a great source of income,” he said, likely to provide “much more than the farmer is probably earning … for raising corn and soybeans.”

But development rubs against the traditional idea that farmland is “a precious nonrenewable resource” that should remain cropland. Solar development also drives up competition for land, raising prices for buyers or tenants who would grow crops, Vance said.

In June, Entergy Arkansas requested proposals for 1,000 megawatts of solar and wind generation by 2026. They won’t be, but if all 1,000 megawatts were solar, about 3.5 million panels would require 8,250 acres. That’s almost 13 square miles, Mike McNeill computed in magnoliareporter.com, a news website covering south Arkansas.

But for now, Arkansas solar fields take up less than 3,000 acres, with Entergy’s three big operational fields — near Stuttgart, Lake Village and Searcy — covering 1,100 acres. But allowing for growth to say, 20,000 acres of solar — beyond any current plans, including Entergy sun projects underway and a 1,900-acre array under construction in Newport by Moss Solar of Fort Lauderdale, Florida — would still constitute less than half of 1% of Arkansas farmland devoted yearly to soybeans, rice, cotton and corn.

“The value of the crops raised on the 15 acres of land dedicated to our 2-megawatt solar project is much less than the value of the kilowatt-hours generated by the solar project,” said Lambert Marshall of Bearskin Farm Partnership, a recent solar adopter in Scott (Pulaski County).

Seal Solar of North Little Rock is installing 4,500 panels on Lambert’s multigenerational farm this summer. The project is expected to come online by the end of the year.

Marshall said he wanted the array to be on farm-owned land that wouldn’t flood and was “easily accessible from a paved county road, and close proximity to the electric utility’s line that serves the area.”

He worked with Seal on pricing and site selection, which became “somewhat of a guessing game of which site could accommodate a solar project of the needed capability with reasonable costs to connect to [First Electric Cooperative’s] electric system.” Eventually, they pinpointed a mutually beneficial site.

“It was simply a business decision,” Marshall said. “Evaluate the long-term cost and benefits of the project, including the tax effects, ongoing operations and maintenance costs, and insurance costs.” He wanted to cut his cash flow into electric bills on the farm, a capital-intensive business.

“Our farm uses a lot of kilowatt-hours for irrigation and grain drying and storage that result in large electric bills. So, like any other business, if we can make an investment … that stabilizes costs in the near term and significantly lowers cost over the long term, then we should make that investment.”

Chris Isbell put it this way in 2019: “When net metering is done, our meter runs backwards. The amount of energy produced is subtracted from the total electric bill.”

Agriculture solar projects fall largely into three categories: smaller systems that farmers own and use to power operations; smaller systems that solar developers keep, selling the power at a discount to farmers; and major utility-scale projects covering many acres leased for 30 years or more. These big projects have drawn the most criticism.

Delta Solar of Little Rock specializes in smaller systems, said President Katie Niebaum, who said the company “was formed to lower the costs associated with solar installations for Arkansas farmers and business owners.” She said agricultural projects make up “between 50% to 70% of our revenue depending upon the year.” Seal Solar President Heather Nelson said farm work will make up about 16% of its 2022 total revenue, projected at $27 million.

Farmers like Mark Isbell, who powers his irrigation system and grain bins with solar energy, also like the bottom line. “In a given year, [solar panels] are providing 30% to 40% of our total energy use, and our energy bills run well into the six figures, maybe a couple of hundred thousand dollars’ worth some years.” 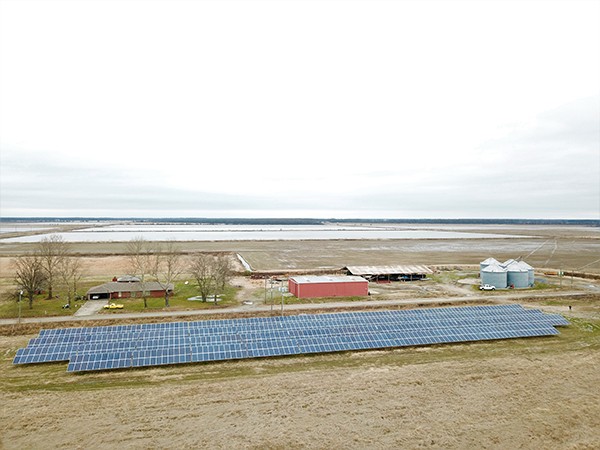 Isbell Farms near Humnoke installed a 310-kilowatt solar array among the rice fields of the multigenerational operation, a system installed by Delta Solar of Little Rock. (Photo provided)

“What we do is put in arrays that run specific things on the farm, and we usually install on ground that is nonproductive or less productive,” said Hood, who managed farms and is a past president of the Arkansas Soybean Association.

For utility-scale projects like Entergy’s, the Newport array and two planned by Amazon in Cross and Crittenden counties, farmers get a certain cash return, something they never get when they plant crops and trust their return to Mother Nature.

Lawmakers made promoting renewable energy a state priority with the Arkansas Renewable Energy Act of 2001, and they opened the door for farmers and others to lease land to solar developers with the Arkansas Solar Access Act of 2019. YSG Solar of New York cited that legislation in an online appeal to Arkansas farmers last year. “Solar farm lease rates can come in anywhere from $300 to $2,000 per acre annually,” YSG wrote, warning they vary widely depending on project details and land value.

Lauren Waldrip, who grew up on a farm in Moro (Lee County) and once led the Arkansas Rice Federation, bristles at the idea farmland is unfit for solar use. She now represents solar developers as executive director of the Arkansas Advanced Energy Association.

“Arkansas farmers and ranchers are forced to accept an obscene amount of risk every year just to put a seed in the ground. Who are we to tell them they can harvest soybeans for a potentially low profit margin, but they can’t harvest the sun for a guaranteed margin?”

Choosing solar power was just doing prudent business, Isbell said. “I would encourage other farmers to consider how it might improve their long-term profitability.”