In the last 15 months, forest products companies operating in Arkansas have announced at least $309 million in improvements to sawmills in the state, in addition to a $10 million investment to restart a paper machine in Ashdown.

“It’s the crazy market that we’ve had for the last two or three years now, the roller-coaster prices that have generated unprecedented profits in the sawmill business,” said Steve Anthony, president of Anthony Timberlands Inc. of Bearden (Ouachita County).

“There’s been some 4 billion board feet of announcements over the U.S. South in the past year,” said Matthew Pelkki, the George Clippert Chair of Forestry at the College of Forestry, Agriculture & Natural Resources at the University of Arkansas at Monticello. “There’s a lot of activity going on, not just in Arkansas. Louisiana, Mississippi, Alabama have all seen some substantial mill announcements. That’s largely looking at capturing those lumber prices.

“Southern pine sawmills have been doing very, very well in the last two-and-a-half years,” he said.

But Pelkki also noted that timber companies had envisioned some of these projects for several years and that the easing of the COVID-19 pandemic was allowing them to proceed. 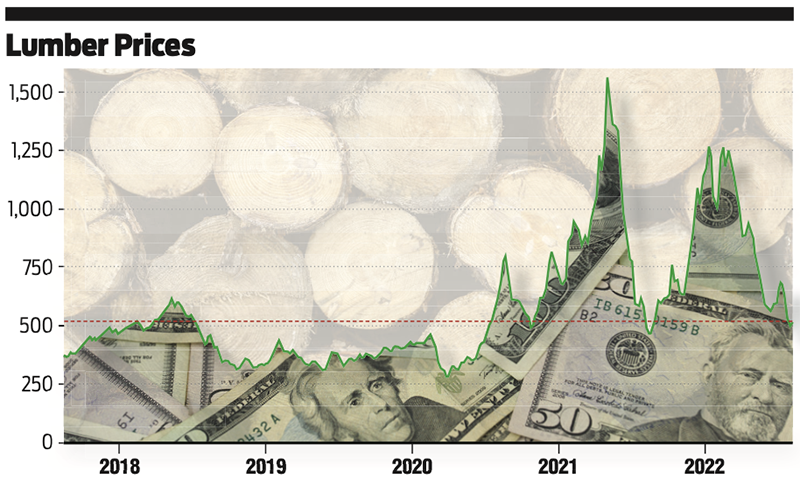 The pandemic certainly fueled the lumber price roller-coaster. Lockdowns in March 2020 and expectations of a recession caused sawmills to curtail production. But then a boom in home renovation super-charged lumber demand. Added to that was a surge in housing demand, with the homebuilding industry the first to come out of the pandemic-caused recession.

As Pelkki noted of lumber prices, “Even in their big drops, they’re still well above what we would consider normal, which was 2019 prices.”

PotlatchDeltic Corp. of Spokane, Washington, which announced this spring that it was spending $131 million to expand and modernize its sawmill in Waldo (Columbia County), told Arkansas Business last week that the project “reflects our belief that the long-term backdrop for housing fundamentals remains favorable for new residential construction and repair and remodel. This is supported by a housing shortage, millennials in their prime homebuying years and aging U.S. housing stock.” 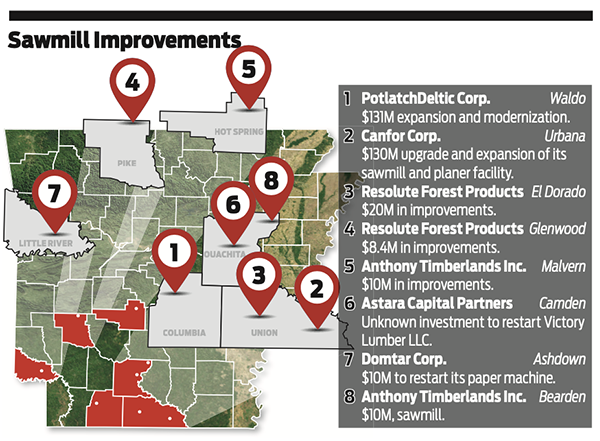 In June, housing starts fell to a nine-month low, to a seasonally adjusted annual rate of 1.559 million units, and rising mortgage rates appear to be cooling what had been a red-hot housing market. If the United States slips into a recession, plans announced by forest products companies could change.

“I can guarantee you that all of these companies are going to be watching what the Fed does,” Pelkki said. “What happens if we do dip into a recession in 2023? That could put a hold on all of this.”

But despite what may be softening demand, Pelkki, for one, believes in the forest products companies’ “earnestness” in announcing their upgrades and expansions. “These companies want to expand,” he said. “But the reality is that if we run into a recession and the housing market dips, that’s going to put continued downward pressure on the lumber market.

“On the other hand, … we’ve been underbuilding new homes for the past decade,” Pelkki said. “That housing demand is not going to go away. While they talk about housing sales dropping, cooling off, we’re still pretty red hot. A home stays on the market now still less than 60 days on average. And a normal market is considered six months.”

The recent softening of lumber prices will have no effect on the upgrade plans for Waldo, a PotlatchDeltic spokesman said. “We used a conservative seven-year average lumber price in our financial analysis, and we expect the project will result in incremental EBITDDA [earnings before income tax, depreciation, depletion and amortization] of $25 million to $30 million per year and a 22% IRR [internal rate of return] in our base case,” the spokesman said.

Anthony, of Anthony Timberlands, said that, generally, the forest products industry has been profitable since 2013, coming off the Great Recession. “But 2019 was the second-worst year in our company’s history,” he said. “Going into 2020, when the pandemic began, it looked awful — coming off the second-worst year in our history, and now we’ve got a pandemic.

“Of course, people laid off shifts in anticipation of a depression, and the exact opposite occurred. The last two or three years have been the two or three most profitable in our history,” Anthony said.

“And people are spending $200 million to build new sawmills and spending $120 million to upgrade existing sawmills, and it just seems crazy unless you think the most recent history is more the norm of what we can expect going forward.”

Pelkki said, “Inflation or not, I think we’re going to continue to see good lumber prices.”