Financial technology startups from across the nation and as far as the Netherlands and Ireland flocked to the Statehouse Convention Center in Little Rock for the first ever VenCent Fintech Summit on Monday.

Hosted by the Venture Center of Little Rock, the summit is designed to connect fintechs to potential customers — banks for the most part — but another benefit many exhibitors cited was the connections they’ve now made to fintechs doing work that complements their own.

The Simmons Bank, Arvest Bank and Discover booths were among those set up by established businesses, along with the Acxiom and Euronet lounges in the middle of the trade show floor on first day of the three-day event.

Euronet, a global company, has a software development arm in Little Rock employing 130 people and a new product that Matt Niles, director of client solutions & products, will be touting in a breakout session Tuesday afternoon.

Smaller firms on display that are headquartered in Arkansas or have an office here were eGiftify, Data Driven Partners and BOND.AI.

Egiftify offers white-label digital gifting, marketing, rewards and payments technology to businesses of all sizes and got its start helping The Terrace restaurant in Little Rock, which is owned by the family of the fintech’s founder, Susi Barakat.

Data Driven Partners, a two-woman operation run by Mallory Van Dover and Jennifer Carlisle, focuses on providing actionable data that banks and credit unions need to be efficient and competitive, launch and measure the success of their Community Reinvestment Act initiatives and mitigate lending risk.

Bond.ai recently launched a first-of-its-kind network of financial institutions and employers that provides tools to help both grow. It is designed to connect banks, credit unions, fintechs and businesses to each other without integration to boost profitability and generate a strong customer acquisition pipeline.

In addition, a few signs on the tradeshow floor directed summit attendees to a row of out-of-state startups currently enrolled in this year’s FIS Fintech Accelerator program, which is hosted by the Venture Center and sponsored by fintech giant FIS of Jacksonville, Florida, as well as the state. 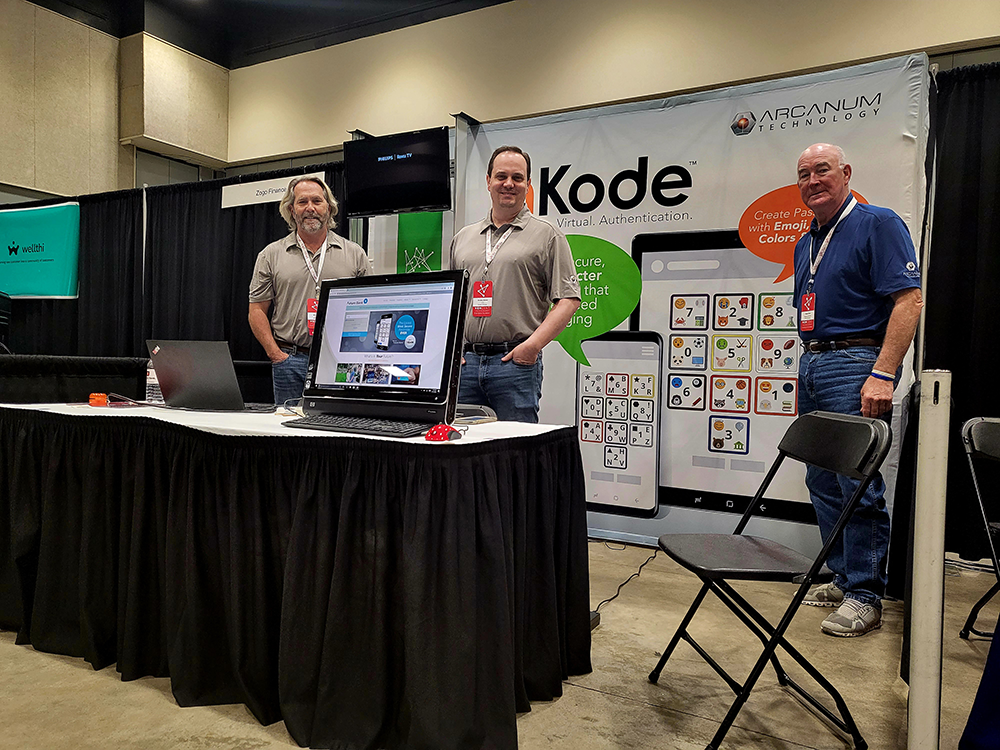 From left: Arcanum Technology executives Brian Finnan, Frank Brice and Brooks Brown on the trade show floor at the VenCent Fintech Summit in Little Rock. The company demonstrated a secure, four-character password that never has to be changed by the end user.

Among these were Tapcheck, with its technology for companies that allows employees to access their paychecks sooner — avoiding predatory payday loans. Next to its booth was fraud transaction monitor Sygno and risk management firm Sardine.

Redactable, as the name implies, aims to help banks correctly redact documents so they meet compliance requirements. Neural Payments’ tech aims to allow customers of different banks to transfer money between them without having to sign up for the same application, such as CashApp.

Many of the other startups with booths had graduated from either the fintech accelerator or the Venture Center-hosted ICBA ThinkTECH Accelerator. They included sales and marketing-focused Fi Works and Plinqit, which aims to automate consumer saving.

One of several standout technologies was nKode by Arcanum Technology of Athens, Georgia. It demoed a secure, four-character password that never has to be changed by the end user.

There were 70-plus fintechs at the tradeshow, far too many to name each one and what they’re up to. But their business goals ranged from automating laborious functions to enabling collaboration to simplifying such complex processes as applying for a mortgage.