This year, the Little Rock metro area became a post-COVID hot spot for the development of golf-driven entertainment centers sporting menus of tasty libations and savory fare. T-Time and Topgolf are in the early stages of happening while a third less-defined project waits in the wings.

Dirt work is in motion in advance of next year’s construction of the $28 million Malys Entertainment Center to be anchored by T-Time at the former Wild River Country site in North Little Rock.

In west Little Rock, Topgolf Entertainment Group of Dallas is expected to close on a 13.9-acre site by year’s end and begin building east of Bowman Road and north of Col. Glenn Road in 2023. The property is in the Interstate 430 corridor about 8.5 miles south from T-Time’s future home. 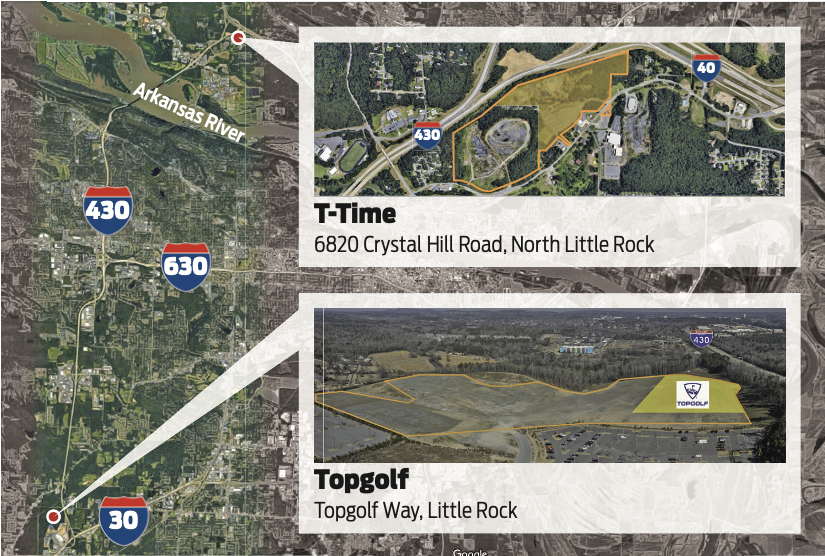 Dr. James Thomas, owner of Conway’s Maly Construction Group and developer of the self-branded T-Time project, believes the central Arkansas market has room for the competing ventures to operate profitably.

“It will hold both,” Thomas said. “We knew Topgolf was trying to do something in Little Rock. We thought the announcement would come through. We weren’t surprised by it.”

But could the market support a third golf-driven entertainment project?

For now, Diamond Valley Development is a paper project with pretty renderings by Corgan Associates Inc. of Dallas that include a 60-bay BigShots Golf facility. Altis Capital of Hot Springs pegs the 41,000-SF tech-driven golf and culinary entertainment venue at $44 million. It’s just one piece of a grand 463-acre mixed-use development in North Little Rock bearing a $346 million sticker price, as promoted by Altis.

Mike Halupka, president and CEO of Altis, hasn’t publicly identified the location for Diamond Valley. Real estate sources report the proposed site is on the north side of Interstate 40 near the Interstate 440 interchange.

Halupka told Arkansas Business that he’s obtained financial backing for the entire project from an unnamed Florida firm. But city leaders have said they know little about the developer’s plans beyond media reports.

The majority owner of BigShots is ClubCorp Holdings Inc. of Dallas, touted as the largest owner and operator of private golf and country clubs in the nation.

In September 2021, ClubCorp announced an $80 million funding deal with New York’s VICI Properties Inc. to back construction of five BigShots projects. It’s unclear if Diamond Development will make the cut as part of that rollout.

Thomas is developing T-Time as part of a 66-acre mixed-use project that will encompass apartments, restaurants and more. An atrium housing a restaurant and bar will link the golf venue to a high-tech arcade center.

“We’re already in preliminary design for the golfing and bowling alley center,” he said. “We hope we get all of the architectural and design work done by the end of the year and go into financing early next year.”

Construction of the entertainment center should start in the spring with a hoped-for completion in 10-11 months, subject to the supply chain’s availability of materials.

Earlier this summer, Thomas purchased the first 37 acres for more than $2.5 million. He hopes to complete grading work on the property by February or March.

“We have started working on that ground because there was a big hill, and we’ve started bringing the big hill down,” he said of the effort to redistribute 800,000 yards of rock and dirt.

In west Little Rock, Topgolf will anchor the east end of the 60-acre mixed-use Village at Brodie Creek project that Colliers International is developing.

“We’ve signed some confidentiality agreements, and we hope to announce soon on who’s coming,” said Lee Strother, principal and vice president of brokerage at the Little Rock office of Colliers.

“We have a sports training facility that’s under contract, a really neat use there. We have a hospitality user that’s interested in one of the sites. We’ve had a lot of interest from restaurants and multifamily users.”