Fayetteville’s Arvest Bank is working on a new west Little Rock branch on undeveloped ground at the southwest corner of Chenal Parkway and St. Vincent Way. The project is portrayed as a new branch for the $26 billion-asset lender rather than a relocation.

But the property is only about a half-mile from an existing Arvest office. That branch on a leased site at 16107 Chenal Parkway opened in 1999.

Arvest operates eight full-service locations in Little Rock and holds the second-largest deposit total in the city at $2 billion, 12.7% of the $15.7 billion market.

Little Rock’s Bank OZK is atop the list of 29 banks in the capital city with more than $4.6 billion in deposits, nearly 29.5%.

In Missouri, Arvest is working on a new full-service branch in Springfield expected to open in February.

The 1,816-SF space is the former digs of Frank ‘N’ Steins eatery, part of the Brewery District Flats project at 535 W. Walnut St. The location represents Arvest office No. 6 in Springfield’s $10.6 billion-deposit market, where the bank ranks No. 13 with deposits of $302 million, 2.84%.

Before year’s end, the $1.8 billion-asset lender hopes to complete its 6,100-SF location in the Apex SouthPark development at 3151 Apex Drive, Suite 102-A in Charlotte.

The $287 billion-deposit market sports a competitive field of 31 banks.

The only other Arkansas-based bank in Charlotte is Bank OZK, which holds deposits of more than $167 million, 0.06%.

Encore will set up shop in the Music Row area of Nashville at 1030 16th Ave. S., Suite 300. The site of the 112,292-SF 1030 Music Row project is the former home of Warner/Chappell Production Music, the Ed Bruce agency, Creative Soul Music Academy and Bobby’s Idle Hour bar.

The $51 billion-deposit Nashville market is home to one other Arkansas domiciled bank: Pine Bluff’s Simmons Bank. The $24 billion-asset lender holds deposits of more than $87 million, 0.17%.

Batesville’s Citizens Bank is digging deeper into Hot Springs with a fourth office. The $1.2 billion-asset lender intends to develop a full-service branch at 2416 Malvern Ave.

Citizens will join five other banks with locations along a short stretch of road southeast of the Hot Springs Country Club. 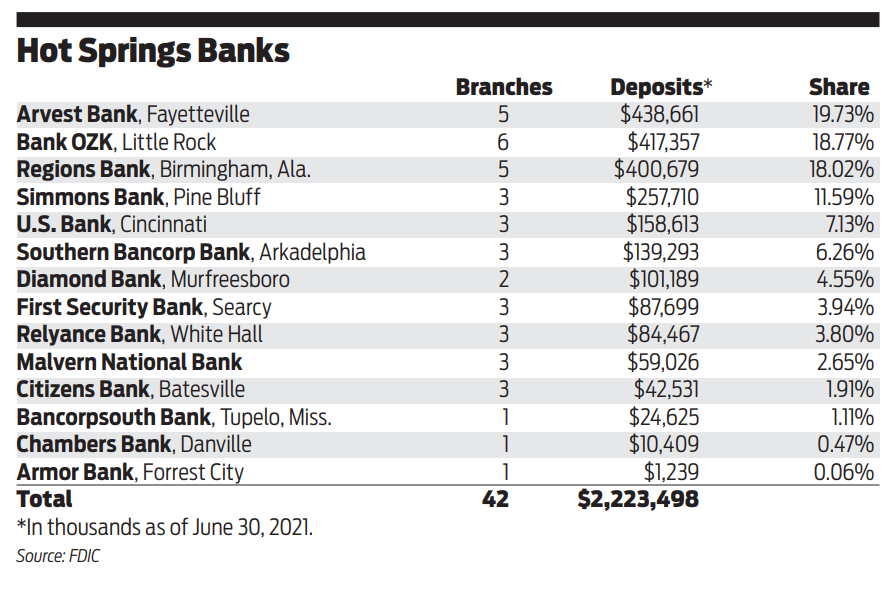