The LPGA tour will return to Rogers for the 15th time in September, demonstrating a staying power that wasn’t guaranteed after heavy rain washed out the inaugural event in 2007.

The 54-hole Walmart NW Arkansas Championship Presented by P&G has a $2.3 million total purse and will attract most of the top women professional golfers to Pinnacle Country Club. Play begins Sept. 23, but the festivities that include a 5K run, a women’s summit and a food festival begin before tournament play.

Organizers designed the championship to show off northwest Arkansas and provide another quality of life amenity: a high-profile sporting event.

The first event began with much fanfare and even more rain. The tournament was rained out after one day, and Event Chairman Jay Allen worried it would be a one-and-done event.

But the business community saw promise through the raindrops. The first event didn’t have a title sponsor but was presented by John Q. Hammons, the Springfield, Missouri, businessman who had sponsored an LPGA event in Oklahoma.

“I wouldn’t say it got close to being canceled because people saw after that first year, especially the key sponsors, the potential,” Allen said. “It was certainly not a guarantee, but we were encouraged to give it another year. We did and it started to get traction.”

The corporate support proved invaluable and the event blossomed into a popular stop for LPGA pros. The $2.3 million purse — the 11th-best of the tour’s 34 events — is a key selling point, but over the years the players have come to enjoy the community support and hospitality.

“It has been successful in no small way due to the tremendous corporate support local companies provide,” said U.S. Rep. Steve Womack, who, as mayor of Rogers, was instrumental in the event’s creation. “Early on, John Q. Hammons helped provide the resources to introduce the event to the region, followed by Procter & Gamble and Walmart — and their associated partners — providing the bulk of funding in the latter years.

“It has also benefited from a tremendous volunteer supply locally, who recognize the importance of how this event showcases our area. A measure of this success can be seen by the number of people returning year after year to assist.”

The tournament has showcased some of the best golfers in the world. Former No. 1 players Yani Tseng, Jiyai Shin and Stacy Lewis are among those who have won the championship.

Lewis is a former University of Arkansas national champion and winner of 13 LPGA events. She always draws a crowd on the course, and if she’s in contention, the crowd is large and loud.

“The community is what makes this event so special to me,” said Lewis, who earned $300,000 for her 2014 Pinnacle victory. “There’s always a great turnout, and I think that’s part of the reason why the event has been around for so many years. There are so many fun things that happen around the event to rally involvement.

“There’s food tastings, a 5K run, and there’s also a kids zone on the course for the little ones to enjoy. We are blessed to have the continuous support of the Rogers community, and I think all of the athletes feel that.”

More than promoting golfers, Allen said the tournament — broadcast on the Golf Channel — has advertised the area. As northwest Arkansas has boomed during the past 20 years, businesses and communities have worked to keep up: To recruit and retain top talent, a region must offer a variety of amenities.

That’s why the region has a Class AA minor league baseball team and a children’s hospital in Springdale and a national airport near Bentonville — and a golf tournament in Rogers.

“It has become something much bigger than golf that aligns with many of the priorities in northwest Arkansas,” Allen said. “It is a world-class sporting event, but there is the women’s connection. D&I [diversity and inclusion] is important to companies.”

Shauna Taylor has been the University of Arkansas’ women’s golf coach since 2007 and was an assistant for four years before that. She agreed that the golf tournament helps promote the area.

She said she often arranges for top prospects to visit the UA the same weekend as the tournament. They get to see professional golf and the community in its best light.

Pinnacle is one of the Razorbacks’ three home courses, and Taylor said the UA is the only university with an LPGA event played on its home course.

“It has been a vital part of our program since this event came to northwest Arkansas; it is about showcasing our home and our community,” Taylor said. “I have had a front-row seat to this event since it started. They have made it about the northwest Arkansas community. That’s the beauty of it. You don’t have to be a golfer to enjoy the week.”

The tournament and the university partner so that each year one Razorback player gets a sponsor’s exemption to play in the tournament. Taylor said there is a yearlong competition to determine the participant. This year it will be senior Kajal Mistry of Johannesburg.

Lewis was the first Razorbacks’ sponsor’s exemption for the 2007 event. She had just captured her NCAA title and, while her stardom is clear in hindsight, no one at the time could have predicted what kind of pro career she would have.

She shot a 7-under-par 65 in her first round to lead the field — and then the monsoon ended the event. Because 36 holes hadn’t been completed, the tournament was ruled a nonevent, and because she was amateur, she didn’t collect any of the $93,750 first-place prize money or post an official tour victory.

“For me, this event always feels like coming home,” Lewis said. “Rogers is such a special place to me, and I have so many great memories from the tournament. My first win (although unofficial due to the tournament being shortened because of weather) came from the NW Arkansas Championship in 2007. That gave me an enormous confidence boost that I had what it took to compete on the LPGA Tour.

“It was also really special to win in 2014 and get to celebrate with the community behind me. I’ll never forget that experience.”

Allen looks back at the 2007 debacle with pride. Six inches of rain and flooding made the course unplayable and impassable — even the parking lots were an adventure.

Allen joked that because of the immensity of the “legendary rainout,” bad weather became part of the tournament’s “brand” even though rain hasn’t been a factor in the 15 years since.

“To see what it has become today is what I am proud of,” Allen said. “It is so much more than a golf tournament. There are so many tentacles. It is a weeklong community event in northwest Arkansas.” 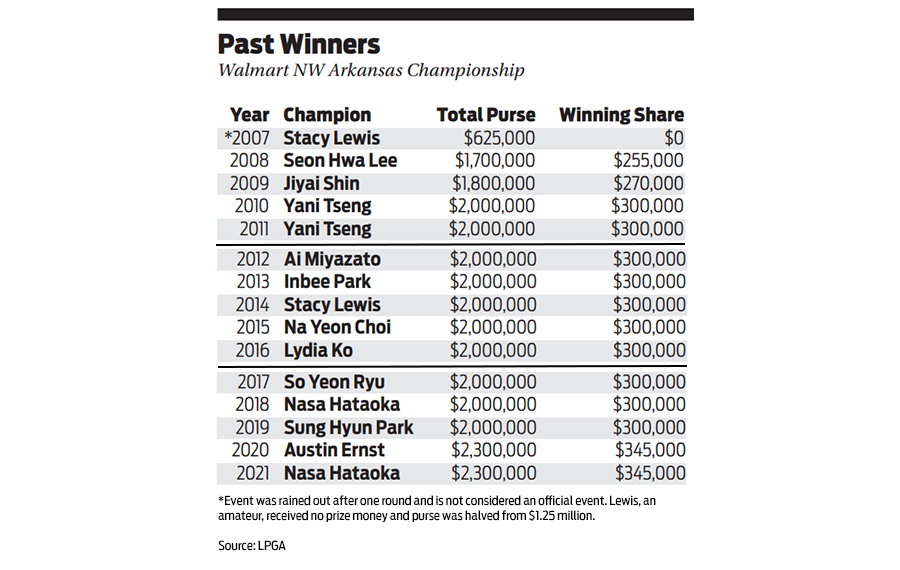