“It’s a big number,” said Tad Bohannon, CEO of Central Arkansas Water. “It will be the largest bond issue we’ve ever done.”

Backing the future bond issue will be an undetermined rate increase for CAW’s 490,280 consumers, located primarily in Pulaski and Saline counties and northwestern Lonoke County. The public utility, which also provides water for bits of Grant, Perry, Faulkner, White and Garland counties, is in the midst of a rate study to analyze the capital needs for the next decade-plus.

“We’re looking at a longer-term horizon of 2050, so we don’t have any bumps in the future, plan ahead,” Bohannon said.

CAW already tweaked rates by doing away with its practice of providing 200 cubic feet of water (about 1,496 gallons) as part of its minimum monthly charge to customers.

The move, described internally as no more free water, began last year by reducing the amount to 100 cubic feet as part of its monthly base charge.

Revenue this year will get a bump thanks to the monthly base rate becoming a monthly charge. As of June 1, no water is included as part of that $7.85 monthly fee for Little Rock and North Little Rock customers and $10.28 for others.

Those line items reflect back-to-back hikes to the monthly base rate, which included the so-called free water. CAW added $1 in 2017 and another $1 in 2018.

These additional charges along with increased rates for actual water usage are linked with the utility’s goal of bankrolling more upgrades to its aging infrastructure, primarily pipes in the ground of which some are a century old.

“The replacement of horizontal lines is part of a pay-as-you-go plan,” Bohannon said. “We’ve paid out of rates rather than debt.”

Even with the recent rate creep, CAW ranks among the lowest-cost water providers among larger cities. That’s according to information gathered by Memphis Light Gas & Water.

Based on MLGW’s 2022 survey, the residential rates at CAW ranked as the third-lowest in the nation. The lowest rates are provided by the Orlando Utilities Commission in Florida, and Phoenix is home to the second-lowest residential rates.

The CAW low-cost ranking for commercial rates varied by category, ranging from third-lowest to sixth-lowest.

Standing in the shade of the Wilson plant’s administration and lab building on a sunny, humid morning, Bohannon underscores the significance of the treatment facility relative to CAW’s second-largest water treatment facility at Ozark Point in the Hillcrest area of Little Rock.

“This, here, is the most critical part of CAW,” he said of the 48-acre Wilson complex. “We can operate with the Ozark plant offline. We can’t ever operate without this plant.”

The Wilson plant produces 75% of the treated water that flows to faucets, hydrants, sprinklers and toilets from CAW’s 2,671 miles of pipe.

“We’ve been working on the preliminary engineering report on what needs to be done [to renovate the Wilson Plant] for about a year,” said Blake Weindorf, CAW’s chief operating officer.

Work on design and specifications should be completed next year with construction expected to break ground in mid-2024. 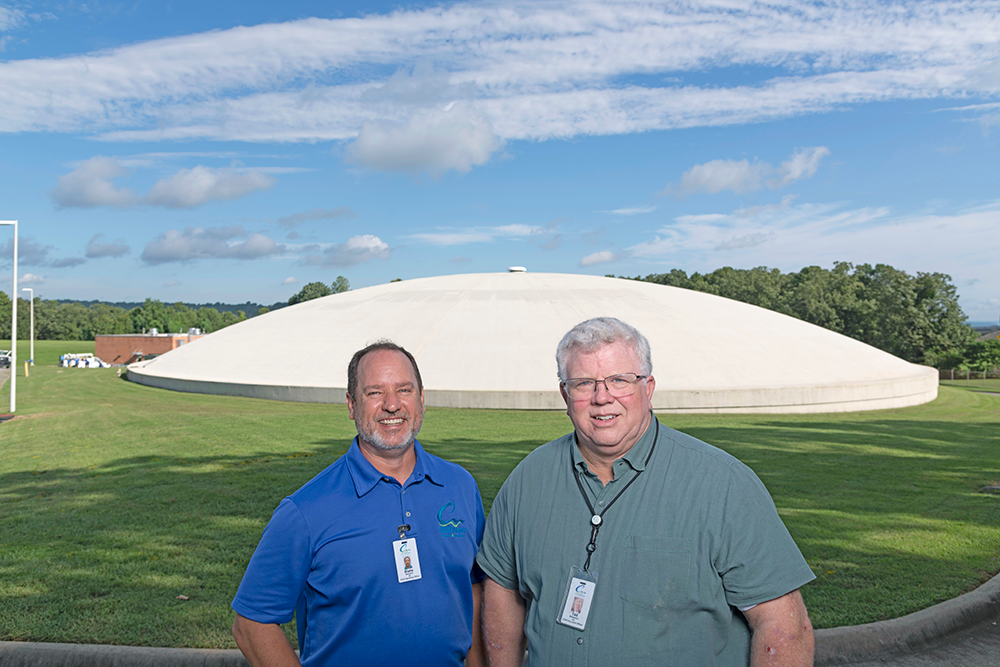 In 2020, CAW completed a $32 million renovation of its Ozark Point water treatment facility, fed by gravity 35 miles to the west from the 1,240-acre Lake Winona in the Ouachita National Forest.

An upgraded Wilson plant with enhanced capabilities and updated technology should be fully online in 2027. The facility harvests its water from the 8,900-acre Lake Maumelle, the largest source of CAW water, surrounded by a 70-mile shoreline.

“We project we should have a capacity expansion as a product of the renovation that could boost the maximum output to 150 million gallons a day without expanding the footprint of the facility,” Weindorf said.

“We always meet or exceed industry standards,” Bohannon said. “But the improvements will allow the Wilson plant to treat water to an elevated high standard.”

This increased capability will provide more wiggle room to produce quality water while dealing with unusual circumstances such as increased turbidity on Lake Maumelle caused by storms or sustained easterly winds.

“For our customers, we have great water, but that doesn’t mean it can’t be better,” Bohannon said. “In many instances, we’re ahead of the regulations. That’s where we need to stay.”

The Wilson upgrades will help the CAW system weather extraordinary stress tests such as the February 2021 Snowmageddon event.

Colder water is harder to treat and requires the system to push more water during chilly temperatures than even high-demand summer heat. Extended subfreezing temperatures 19 months ago contributed to the challenge by rupturing pipes and bleeding water.

In round numbers, the tally was 100 breaks on fire service pipes and 1,000 breaks on residential service lines. Residential demand spiked as well with the added drain of dripping faucets to safeguard against frozen pipes.

The historic travails of the water system in Jackson, Mississippi, serve as a cautionary tale of poor stewardship exacerbated by fiscal snafus. Recent flooding served as the catalyst to break the city’s long-neglected water system and highlighted Jackson’s ongoing water quality issues.

“That’s a prime example of what happens when you run a water treatment plant to failure,” Bohannon said of the flood-induced catastrophe. “At some point, you have to reinvest before end of life.”

Energy
World Energy Crisis: Out of Pan, Into Fire