Three and a half years on, Chris Roberts and his Encore Bank team remain a blur of activity fast-tracking a once-sleepy Little Rock bank into a dynamic multi-state lender.

Since 2019, they’ve taken the formerCapital Bank from a tiny blip on the radar screen of lenders to register among the 10 largest banks in Arkansas and the 400 largest in the country.

Total assets mushroomed from $165 million at the end of the first quarter 2019 to more than $2.4 billion as of June 30. The bank grew more during its first year under the Encore banner than its previous 20 years as Capital. 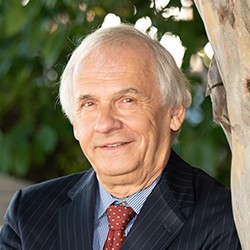 “This is all non-acquisition growth,” said Randy Dennis, president and CEO of Little Rock’s DD&F Consulting Group. “I’d be lying if I didn’t say it was extraordinary, because it is.”

The veteran bank consultant considers the fiscal transformation of Capital-Encore into the seventh largest bank in Arkansas by assets and No. 380 nationwide to be a historic achievement. And in a nod of self-recognition, Encore touts itself as the fastest organically growing bank in the country, a claim that has gone unchallenged.

“They are very ambitious,” Dennis said. “There’s no doubt about that. There’s a lot of people who believe in them and are willing to invest a lot of capital with them.”

Roberts, chairman and CEO of Encore and its namesake holding company, is directing a third round of stock sales to broaden the capital base and maintain the bank’s trajectory.

Encore Bancshares launched the private placement offering in May to raise $130 million. The current effort follows stock offerings of $50 million in 2019 and $90 million in 2021. Total shares issued: More than 1.1 million.

“We’re calling on our small army of investors to help drive business to us,” Roberts said in an April 2019 interview with Arkansas Business. “Our model is to leverage our shareholders and our team’s contacts to grow the bank.”

Roberts and Burt Hicks, Encore’s president, did not respond to a request to schedule an interview.

The blossoming boutique bank continues to ramp up its loan production while building its franchise and generating up-and-down quarterly profits.

When the Encore crew entered the picture at Capital Bank in the first quarter of 2019, equity capital totaled a mere $15.9 million. After completing two stock offerings, that tally stood at $173 million as of June 30. The company raised its minimum investment threshold from $25,000 in the first offering in 2019 to $159,000 in the current offering. Click here for a table of Encore's quarterly earnings since 2019.

Meanwhile, Encore has chosen select markets for its new offices. So far, it operates physical locations in eight states beyond Arkansas: Alabama, the Carolinas, Colorado, Florida, Missouri, Tennessee and Texas. 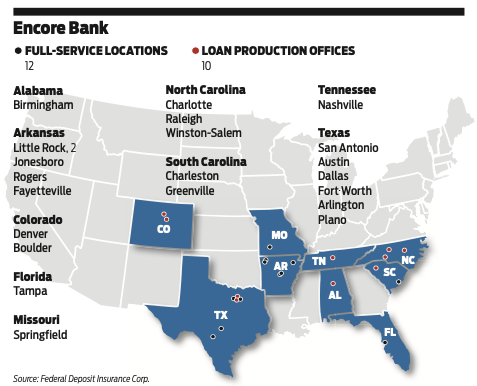 It followed those in-state moves with 2021 branch openings in Texas and Missouri: Austin on Aug. 23, San Antonio on Sept. 7, Springfield on Sept. 13 and Dallas on Dec. 1.

This year’s list of branch openings leap from Texas to Florida, with Fort Worth on Feb. 1 and Tampa on Aug. 1. Encore also plans loan production offices in Arlington and Plano, Texas.

While rolling out more offices in Texas, Encore is increasing its footprint in the Carolinas after taking its first step into Charleston, South Carolina. The loan production office there became a full-service branch on Aug. 22. 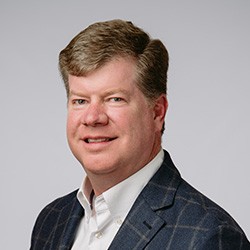 Michael Sharpton, announced as Encore’s regional president of the Carolinas 11 months ago, indicated that the company will convert three loan production offices in North Carolina and one in South Carolina into full-service branches.

His oversight of a two-state region reflects a departure from Encore’s organizational hierarchy elsewhere. So far, the bank has hired 16 market/regional presidents to manage business in the other seven states where it operates offices.

Like Sharpton, the selections are characterized by experienced, well-connected bankers who can make inroads quickly in their respective territories.

“Chris has done a heck of a job identifying talent,” Dennis said. “He has hired some great people, including one of our staff. He’s not just finding lenders. He’s finding deposit bringers. That’s a knack.”

In three years, total deposits at Encore have ballooned from nearly $121.8 million to more than $1.9 billion.

Among the market/regional presidents, a dozen also hold the title of executive vice president. Another dozen EVPs populate the Encore’s corporate ranks.

Based on the first six months, total cost for salaries and benefits this year is on pace for $36 million.

Starting with a headcount of 18 on March 31, 2019, the Encore staff has essentially doubled in each of its first three complete years of business.