The flurry of residential real estate sales in Arkansas during the pandemic is powering a general surge in property values and rising property taxes. Propelled by a hot seller’s market, those escalating valuations are settling onto the tax rolls across the state in historic fashion.

This summer, 15 of the 17 counties that completed reappraisals of residential, commercial and industrial property registered 25%-plus growth in value since 2017. In Garland and Carroll counties, the five-year growth in values for the three combined categories of property topped 50%. 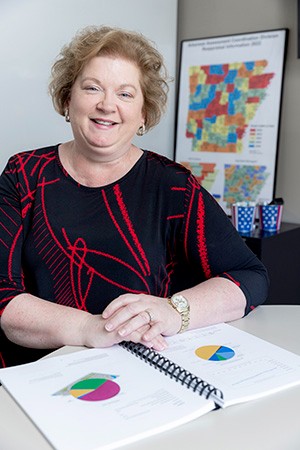 So many counties experiencing more than 25% growth during the same reappraisal cycle is unheard of, according to Sandra Cawyer, director of the Arkansas Assessment Coordination Division.

“This is the first time I’ve seen 15 counties in one cycle,” Cawyer said. “We didn’t have any doubts the bigger counties would increase. We were surprised with some of the smaller counties.”

Newton County, among the most rural and sparsely populated counties in Arkansas, recorded a 46.8% climb in property values. That was the third biggest change among the 17 counties in the 2022 reappraisal.

“It’s just crazy,” said Stephen Willis, Newton County assessor. “But I’m not surprised after I’d seen some of the deeds come in and the prices they were paying.”

What’s going on in the Ozark Mountains enclave, home to about 7,700 residents and the upper Buffalo National River?

Willis describes a mixture of land speculation and out-of-state homebuyers driving prices upward. He believes some of the sales activity is linked with buyers hoping to ride the financial coattails of Johnny Morris, billionaire founder and CEO of Bass Pro Shops in Springfield, Missouri.

Local boosters hope Morris will deploy his considerable resources to transform the derelict Dogpatch and surrounding area into another tourism magnate like his 10,000-acre Dogwood Canyon Nature Park in Missouri, just north of the Arkansas state line above Carroll County.

The newest batch of Newton County property owners are coming from California, Louisiana, Illinois and Texas.

“Texas by far is top,” Willis said. “I’ve seen a lot of Texas people coming through buying homes. I don’t know if the population is changing a whole lot, but I’m seeing a lot of people coming in buying land to someday build.”

The AACD’s Cawyer believes a common amenity shared by some counties in the 2022 reappraisal helped drive sales activity and boost property values.

“People moving into the state were willing to pay whatever it took to get here, whether it was the city or the country,” she said. “That was especially true if a big, recreational lake was nearby.”

Among the counties in this year’s roster of rising property values with sizable man-made bodies of water are: Garland, with Lake Hamilton and much of Lake Ouachita; Carroll, with access to Beaver and Table Rock lakes; Pike, home to Lake Greeson; Cleburne, where most of Greers Ferry Lake resides; and Baxter, with Lake Norfork and the lower end of Bull Shoals Lake. The only two counties in this year’s reappraisal that didn’t top 25% valuation growth during 2017-22 were St. Francis and Desha. That means both counties will stay on a five-year cycle of reappraisals.

The other 15 counties, which include Conway, Craighead, Little River, Mississippi, Perry, Poinsett, Pulaski and Searcy, will go to three-year reappraisal cycles and remain there until dropping below 25% during a future cycle.

The resulting changes will produce a boost in property tax revenue that will benefit school districts, municipalities and county governments.

However, annual increases are capped, so a huge boom year of property tax collection won’t happen.

By law, property taxes on a home-owner’s primary residence can only increase by 5% in one year, regardless of the change in appraisal. That sets the stage for a series of annual 5% increases for some homeowners who were visited by substantial appreciation.

The exceptions are homeowners who are disabled or 65 years or older. Their property taxes are frozen provided they have filed the exemption paperwork with the county assessor’s office. The annual cap for increases in property taxes is set at 10% for commercial and industrial property.

The reappraisal class of 2022 is the first wave of counties expected to tally sizable gains in property values. During each of the next four years, a new crop of counties will complete reappraisals that are expected to reflect some significant increases. 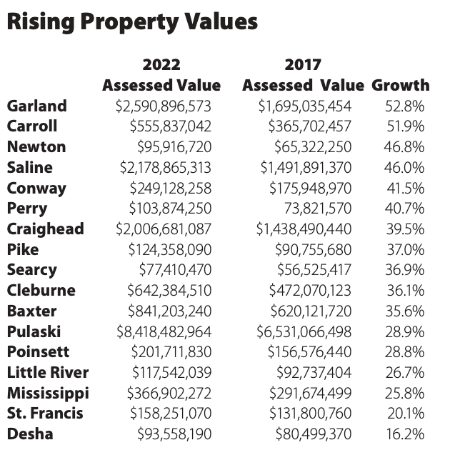 Next up in 2023 will be Arkansas, Ashley, Clay, Columbia, Crawford, Jefferson, Lawrence, Montgomery, Polk, Sharp, Washington and Union counties.

Joe Thompson, chief administrator of the Pulaski County Tax Assessor’s Office, said the 2022 reappraisal captured more valuation changes than he had ever seen.

“Yes, ever,” Thompson said. “This market was so hot that real estate was selling no matter where it was.”

He and Karla Burnett, director of the Pulaski County assessor’s office, were among those pleasantly surprised that the changes didn’t generate more property tax appeals.

The reappraised values generated protests on 4,644 parcels in the state’s most populous county.

Of those protests, 1,400 parcels will undergo appeal before the board of equalization.

She estimates that her office received about 3,500 applications for homestead exemptions, with most of those tied to property tax freezes for homeowners who are disabled or at least 65.

The real estate activity during 2020-22 provided a pool of comparable sales to study values unlike any other reappraisal cycle witnessed in Arkansas.

“We have never had this number of sales comps,” Burnett said. “We had so many sales between 2020 and now. It was an historic event.”