Dude Crain's Widow and Daughters In Legal Battle Over Estate

A messy battle over the nine-figure estate of the late Fort Smith businessman H.C. “Dude” Crain Jr. is now before the 8th U.S. Circuit Court of Appeals in St. Louis.

In 2020, Crain’s four daughters sued their stepmother, Shirley Crain, in U.S. District Court in Fort Smith after she refused to give them half of their father’s estate, as he had promised in a 1989 settlement agreement with his first wife. Shirley Crain controlled her late husband’s assets after he died and either kept them, gave them away or sold them, the suit said.

The daughters, Lisa Crain, Cathee Crain, Marillyn Crain Brody and Kristan Snell, who all live in Texas, won a legal victory from U.S. District Judge Timothy Brooks of Fayetteville, who ruled that the property settlement agreement Dude Crain made with his first wife is enforceable. He awarded the daughters about half of their father’s assets in January; their share was worth about $100 million at the time.

Shirley Crain has appealed Brooks’ order, as well as $363,000 in attorneys’ fees and $10,600 in costs he awarded to the daughters’ attorneys.

One of the attorneys representing the daughters, Tim Hutchinson of RMP LLP of Springdale, told Arkansas Business the firm doesn’t comment on active litigation. Attorneys for Shirley Crain didn’t return calls for comment.

The case highlights hurdles in estate planning for blended families. 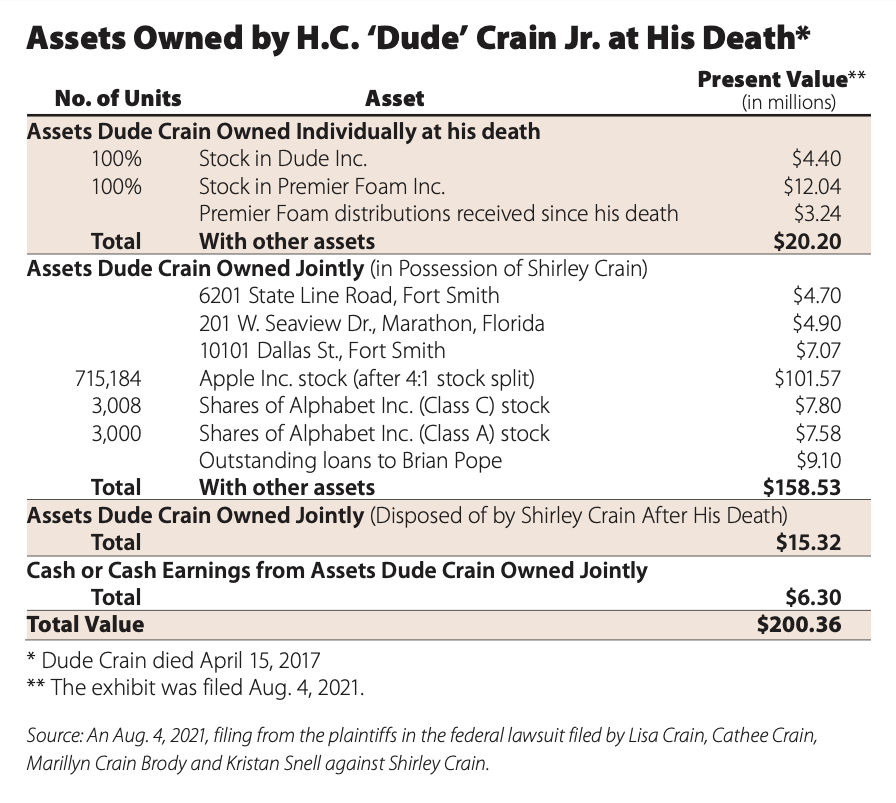 The dispute focused on a 1989 property settlement between Dude Crain and his first wife, who, like one of the daughters, is named Marillyn.

The couple married in 1954 and, with Dude Crain’s parents, started Crain Sales Co. in 1960. The company, later incorporated as Crain Industries Inc., made polyurethane foam and foam and polyester fiber items. The company grew into one of the largest privately owned companies in the state. Arkansas Business reported its revenue as $154 million in 1990, five years before it was sold.

Daughter Marillyn Crain Brody, who goes by “Mimi,” testified in July 2021 that her dad worked hard, “but he found a lot of time to spend with us and do things for us.”

Her parents separated in the 1970s but did not immediately divorce.

Shirley Crain met Dude Crain in 1983 and they started dating in 1984. She testified in July 2021 that she didn’t know he was married at the time, but she said that he later told her.

He told her that he had not needed to get a divorce because “he had not found anyone that he wanted to spend the rest of his life with,” she said. But after they met, he moved forward with the divorce.

As part of the settlement, the couple agreed to maintain wills leaving at least half of their estate to their daughters.

Brody said that her mother told her about this settlement agreement before it was approved in 1989. But she said her dad never mentioned it.

Dude and Shirley Crain married after his divorce was final in 1989. She had a son from a previous marriage.

In 2012, Dude Crain created a new will leaving nothing to his daughters. He had sold Crain Industries for $130 million in 1995, receiving $83.9 million, and he’d started other companies.

Under the 2012 will, his wife would be executor of his estate, and Dude Crain created a marital deduction trust that named Shirley Crain as the only trustee and beneficiary.

Dude Crain’s daughters and his stepson would inherit any assets that were left in the trust after Shirley Crain’s death.

The problem with that arrangement, according to the daughters’ court filings, was that Shirley Crain could do anything she wanted to with assets in the trust, including spending all the money or giving it to her son, violations of the property settlement.

To avoid that problem, legal experts told Arkansas Business that the will should have given Shirley Crain a limited power of appointment, which would have allowed her to use income from the trust during her life. She could have used the principle for a limited number of things, such as her health and well-being.

About 90% of his assets were owned jointly with Shirley Crain, which meant that they didn’t go through probate and passed to her.

Shirley Crain said she didn’t know about the property settlement deal he had made in 1989. And even though she was in the estate-planning meetings to create the will, it wasn’t brought up.

“Immediately after his death, Shirley took possession of Dude’s separate assets and either held or disposed of them as she saw fit,” Judge Brooks wrote in his order.

Shirley Crain said in the 2021 trial that she thought she could use the money.

“Everything we owned, it was ours,” she said. “What’s mine was his and what’s his was mine. That’s the way we began our lives together and that’s the way we always lived it.”

In May 2021, Brooks ruled that Dude Crain did breach the will provision of the property settlement deal.

How to correct the breach became “a somewhat thorny issue, given the passage of time between Dude’s death and the Court’s decision,” Judge Brooks wrote in his order filed in January.

Having to identify and value those assets as of the date of Dude Crain’s death and then tracing their current location “presented significant challenges,” he wrote.

But Brooks ruled that Shirley Crain had to turn over assets valued at about $100 million to the daughters. The assets included ownership in companies and investment accounts.

She said that she and her husband lavished his daughters Christmas and birthday gifts.

“We gave any excuse to give congratulations or gifts,” she said.

But during the trial, she said she didn’t know if she would have been that generous had she known her stepdaughters would eventually claim half of their father’s assets.

“At the time, I was under the impression that we had a different relationship than is now coming to light,” Shirley Crain said. “So I don’t know. I probably would have given them the gifts anyway.”