Rison’s Gateway Bank is wading deeper into the Saline County market. The $114 million-asset lender is developing a full-service branch in Benton at 17328 Interstate 30 in the Hickory Square Shopping Center.

The location should be open in the first quarter of 2023.

Gateway will join nine other banks competing through 15 full-service branches in the $1 billion-deposit Benton market. The Benton office will be Gateway’s third location. A Malvern branch that opened in 2015 was gone by 2019. 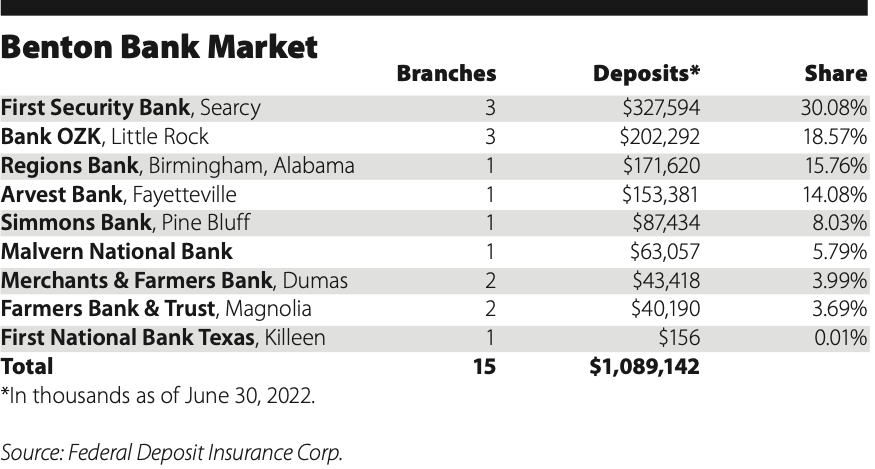 The bank’s first move in Saline County began as a Bryant loan production office in 2016, which became a full-service branch in April 2019.

During the past three years, Gateway has carved out a 4.37% slice of Bryant’s $744 million-deposit market. Its $33.8 million total ranks No. 7 among a dozen banks on the ground in Bryant.

Officing out of Gateway’s Bryant location is Robi McDonald, who was promoted to president and CEO in March. McDonald joined the bank as senior vice president and chief lending officer in June 2020.

He replaced Joe Dunn, who now is senior vice president and senior lender at the Little Rock office of Mountain View’s Stone Bank.

More than five years after investing in Tennessee real estate, Little Rock’s Bank OZK is looking to open its first full-service branch in the Volunteer State.

The $25.9 billion-asset lender is working on an office in the north Nashville suburb of Madison.

Expected to be open in 2023, the location will expand Bank OZK’s branch network to Tennessee, representing the ninth state in its footprint.

But Bank OZK’s acquisition of a future Tennessee branch site dates to July 2017.

That’s when the bank bought a 1-acre location at 152 Wilson Pike Circle in the south Nashville suburb of Brentwood for $2.8 million. Cleared for redevelopment, the property remains vacant for now.

Batesville’s First Community Bank should have its first full-service branch open in Beebe by the end of the month. The leased location is at 2427 W. Center St., Suite 2067.

The project marks the swift transition from a loan production office First Community opened earlier this year to make home loans in the Beebe market.

The office represents full-service branch No. 31 for the $2.1 billion-asset lender.

Arvest Bank has progressed with its plans for a new west Little Rock office, mentioned here two months ago.