Year three of Pace Burt’s redevelopment of the old Veterans Affairs Hospital in downtown Little Rock promises to be an especially busy one.

He is queuing up a flurry of finish-out work to transform the 10-story building that once served as a 1,234-bed infirmary for ex-military personnel into a gated 160-unit residential project to house market-rate apartment dwellers.

“We’ll be completed by Dec. 31, 2023,” said Burt, who specializes in redeveloping historic properties. “We need to be from a logistical standpoint.”

Final construction plans for the $25 million project will be submitted for review by city officials next month.

Instead of shoehorning 216 apartments into former patient rooms — a proposal by an earlier would-be developer — Burt is opening up the original floor plans to create more living space for residents.

The interior reconfiguration of the landmark structure will produce 2,100-SF, two-bedroom apartments and 1,200-SF, one-bedroom units.

“To get over the stigma of the hospital, we wanted to make the units special,” Burt said with a laugh. “Maybe that’s too much room.”

Since buying the 435,000-SF building at 300 E. Roosevelt Road for $2.7 million in November 2020, Burt has invested another $4 million to prepare for the final construction push.

“We’ll be putting a brand new roof on there,” Burt said of the coming work. “We’ve patched it, but it’s temporary.”

A big-ticket item followed the decision to do away with the cheap vinyl windows that had replaced the originals. That entailed custom-ordered windows, more than 2,200.

“This project was massive,” Burt said. “To take this building to the next level, we had to bring the historic windows back. We had to do this to make this place a showplace.”

“The windows help bring the character back,” Johnson said. “It was such an important part of the look of the building, the linear and horizontal lines.”

Built during 1948-50, the hospital is designed in the International Style, the product of two Little Rock architectural firms of the day: Brueggeman Swaim & Allen and Erhart Eichenbaum & Rauch. 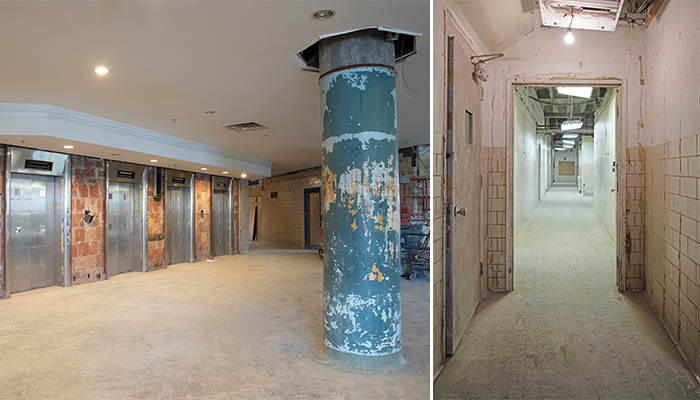 The elevator lobby and corridors of the old VA hospital await a makeover.

Johnson helped work on an important item to make the redevelopment financially feasible: getting the old VA hospital listed in the National Historic Register on Sept. 14, 2021.

This positioned the project to qualify for tax credits to help pay for the expensive hospital-to-apartments makeover.

“We have been approved for the tax credits, but we have to follow the guidelines,” Burt said. “We have to be careful how we do things.”

About 80% of the project cost will be eligible for tax credits. In round numbers, the combination of federal and state tax credits could help fund about 36% of the overall cost of the project.

“It’s a really complicated deal, and at the end of the day, you may end up netting out 50-60 cents on the dollar,” Burt said of the sale of tax credits. “The VA project wouldn’t have happened without the governor and his help with state tax credits.”

The west end of the VA hospital houses the downtown precinct for the Little Rock Police Department, which had occupied more than 7,000 SF on a year-to-year lease before Burt bought the building.

“Mayor [Frank] Scott committed to keeping the police presence in that building for 10 years,” Burt said. “I want them to stay there as long as they want to.”

Two free-standing buildings on the west side of the hospital will likely house property management and support staff for the apartments.

The former hospital’s 17-acre complex has shrunk since Our House, which provides services to the homeless, began acquiring parts of the eastern side of the property in 1997. That’s where support buildings that housed the laundry, heating plant and maintenance shop once stood.

Today, Our House is in the middle of a $16 million expansion. It will have a for-profit neighbor when the high-rise apartments come on line.

“The views are just breathtaking over there,” Johnson said. “I think it’s going to be wonderful for that neighborhood. This will be a link with the SoMa District down Main Street to Roosevelt.”

Built on a 60-foot hill, the hospital occupies a prominent location with high visibility that caught Burt’s eye the first time he came to Little Rock to inspect the property.

“A lot of folks have seen the hospital building from the interstate or flying into town,” he said. “We hope to make it a jewel.”