CDI Contractors is looking to Texas to boost its fortunes and expand its book of business. The headcount of staffers at the Little Rock construction firm owned by Dillard’s Inc. stands at 270 for now, but that will soon be growing.

“I really see that getting to about 300 in the first quarter of ’23,” said Mark Beach, CDI’s president and CEO. “We have a really good pipeline stacking up for 2023.”

To help increase the volume of business, CDI hired Jeff Garner as Texas division manager in June 2021 and opened an office in Frisco this year.

Garner came to CDI via Jim Cooper Construction Co., where he was the Texas division manager for the Birmingham, Alabama, firm since March 2018. Before that, Garner worked for 16 years at EMJ Corp. in Chattanooga, Tennessee, rising to vice president.

“Steel starts going up this week,” Beach said, regarding the Hubbard project.

Before his promotion to president and CEO in June, Beach led the restructuring of the company, adding a dedicated preconstruction services department, virtual design and construction staff and services, and a dedicated business development and marketing team.

“CDI is well-positioned within the industry, and I know Mark is the right person to lead the company going forward,” said Chris Johnson, co-principal financial officer at Dillard’s Inc.

Beach, whose 41-year career en-compasses construction-related work across Mississippi, Texas and Arkanssas, describes his role as a shepherd of transition. He worked for two years to prepare the company’s leadership structure for Lloyd Garrison’s retirement as president and CEO.

“We didn’t know when it would happen but wanted to be ready,” Beach said. “As you move along, there are deliberate steps to bring up the next generation of leadership. An abrupt change in leadership can be the most disruptive to a company.”

Semans was division manager for CDI’s central Arkansas operations. He joined the company in 2010 after serving as program manager for the design and construction team on the Clinton Presidential Library in Little Rock and providing owner’s representation services for Crystal Bridges Museum of American Art in Bentonville and the Bill & Melinda Gates Foundation Visitor Center in Seattle.

Work related to the Dillard’s department store chain has provided a historical foundation for CDI Contractors. In days past, much of its work focused on new ground-up store construction. That emphasis has waned.

“The Dillard’s book of business is carried out by a separate division of CDI that accounts for 20%-25% of total revenue,” Beach said. “Even today, it’s not always a brand-new store and could be a former Sears or JCPenney. The work often involves the retrofit of an existing facility.”

Though retired as CDI’s president and CEO, Lloyd Garrison remains chairman while taking on a new role as liaison for Dillard’s store construction.

His work entails recruiting and retaining talent for store remodel work as well as incorporating virtual design, prefabrication and other new technologies developed and adopted by the public market side of CDI.

“We also have a pretty good, small army of folks who roll out new store displays that can take anywhere from two weeks to two months to complete,” Beach said.

Among CDI’s active non-Dillard’s projects is the new 11,500-SF visitor center at Pinnacle Mountain State Park on the western edge of Little Rock. The site is on the east side of Highway 300, north of the main entrance to the park.

“We started in April, and we’ll turn it over in June,” said Kyle Robbins, CDI’s project supervisor on the $9.1 million facility.

The project features a glass and natural stone exterior and a maze of glue-laminated timber plus a 100-foot truss. The complex geometric puzzle of fabricated posts, beams and rafters is designed with minimal tolerance for wiggle room at hundreds of connection points.

“That’s what we do,” said Semans. “We do complicated, complex structures.”

The weather-dependent site work for the structure is knocked out, and construction on the concrete foundation will soon go vertical.

“It’s about to get real busy again,” said Robbins.

This year marked the 35th anniversary of CDI Contractors. The impetus for forming the venture was the 1987 bankruptcy of the largest construction company in Arkansas: Little Rock’s Pickens-Bond Construction Co.

“Up until that time, they had done all the construction work for Dillard’s, and Bill Dillard [II] and I were good friends,” recounted Bill Clark in a 1994 interview with Arkansas Business. “He had a big building program coming up for the next 10 years, so we decided it would be in Dillard’s best interest to own part of a construction company.” 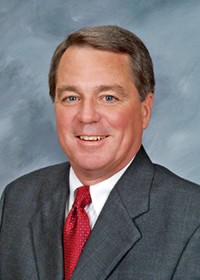 Formed in 1947, Pickens-Bond was listed among the 100 largest general contractors in the nation at the time of its collapse. The demise of the company created a flux of construction talent that included Lloyd Garrison, a former estimator/project manager with Pickens-Bond.

Garrison was among the first staffers to join CDI. In January 1996, he was promoted from executive vice president to president. Thirteen years later, Garrison was named chairman and CEO in the wake of Bill Clark’s death in 2007 and exodus of his son. William Clark resigned as chairman and CEO at CDI in January 2009 after an unsuccessful bid to acquire the company from Dillard’s and formed Clark Contractors of Little Rock.

That changing of the guard coincided with Beach entering the picture at CDI. His familiarity with the company dates back another 10 years.

Beach interviewed with CDI in 1999 after a recruiter contacted him about a job opportunity. CDI offered him a project manager job during his visit to Arkansas.

But Beach was already a project manager with MEDCO Construction, where he oversaw work in the Dallas-Fort Worth area.

Beach wasn’t interested in a lateral career move and declined. He was looking for a chance to move into operational leadership.

In 2009, Beach was a vice president overseeing health care construction in the southern region for Duke Realty Corp. in Dallas when another interview with CDI opened that door.

“That’s a job I believe I’ll take,” Beach recalls when he accepted the offer to join as vice president and take on the duties of chief operating officer. “Working at CDI has been the most rewarding 13 years of my career.”

1997: With a mix of Dillard’s corporate work and other projects, CDI ranks as the largest commercial contractor in Arkansas with $314 million in revenue for the year.
2004: Revenue hits $403 million as the company completes work on the $110 million Clinton Presidential Library and opens a Fayetteville office led by new hire Matt Bodishbaugh.

May 2007: Bill Clark dies and is succeeded as chairman and CEO of CDI by his son, William.

August 2008: Dillard’s Inc. exercises its option to acquire sole ownership of CDI. The transaction encompasses a $9.8 million buyout of a trust established by Bill Clark and Bragg’s Electric, which is controlled by the Clark family. The company completes work on the $153 million UAMS Patient Tower that year.

January 2009: William Clark resigns from CDI after leading an unsuccessful effort to purchase the company from Dillard’s. Lloyd Garrison, president since 1996, is named chairman and CEO. Later that year, Mark Beach joins the company and subsequently is named chief operating officer.

2016: CDI completes a $60 million renovation of the Robinson Center in downtown Little Rock.