The lingering effects from the COVID-19 pandemic and higher inflation have not dampened the construction industry in Arkansas.

Construction company executives say demand for projects has remained robust, and they have learned to cope with now-predictable complications like higher materials costs and labor shortages. Arkansas continues to struggle with its construction workforce and was one of 19 states to lose jobs in that area in October, according to the U.S. Bureau of Labor Statistics.

A “new normal” has emerged, allowing construction companies to plan their operations much better. The previous environment caused concerns because companies couldn’t be sure how much something would cost or how long it would take to arrive.

“The pandemic is in the rear view, but its effects on the supply chain and inflation are still front and center for construction,” said John Teeter, president of CR Crawford Construction of Fayetteville. “The issues we see are leftovers, remnants from the pandemic. The past 18 months have been unpredictable and unplannable supply chain-type issues; I see that behind us.

“The whole rest of the world looks sad compared to what’s going on in northwest Arkansas so you can’t really compare,” Teeter said. “Everything else is dependable growth.”

Andrew Adlong, south region president of Nabholz Construction Corp. of Conway, agreed: “I would say everything was probably about normal, doing as well as it has in the past few years, which have been very good years.”

Other areas in Arkansas are also showing strength. “We have been real busy,” said Gaylon Tate, president of Tate General Contractors in Jonesboro. “We haven’t slowed down.”

The prevailing headwind for construction growth has been the workforce. The Associated General Contractors of America, based in Arlington, Virginia, on Nov. 18 released a report based on the latest Bureau of Labor Statistics numbers showing that there were more job openings than new hires in construction last month.

The report counted 54,500 Arkansas construction employees in October, down 800 from September. The 1.4% decline put the state in a four-way tie for 45th nationally.

The longer-term view was better. Arkansas’ 54,500 jobs totaled 1,200 more than its workforce in February 2020, a month before the pandemic began. That 2.3% gain put Arkansas 30th nationally for construction job growth. Nationally, the AGCA said the unemployment rate in construction was 4.1%. 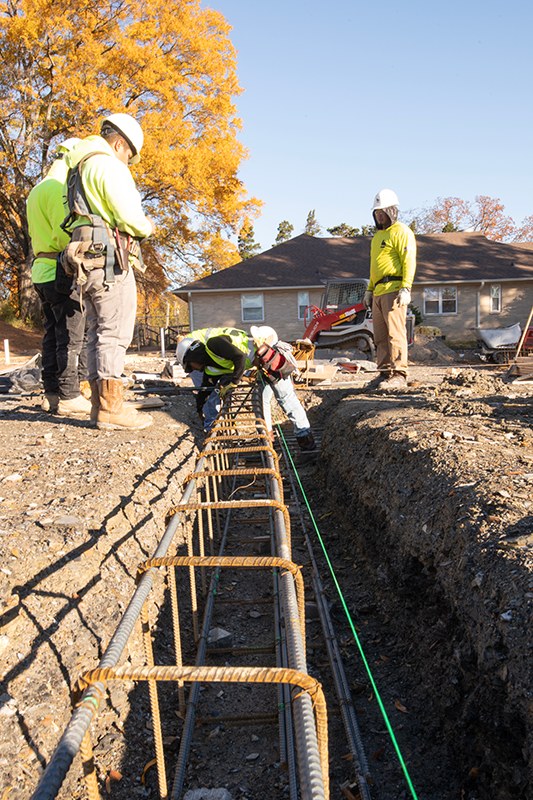 “Although barely half of states added workers in October, government data on job openings and hires show contractors were eager to add employees,” said Ken Simonson, the chief economist for the AGCA. “The shortfall in available workers is undermining job gains and causing delays and higher costs for many projects.”

There isn’t any quick-and-easy short-term solution to the workforce problem. Even Teeter said, “Short term is a puzzle to me.” Long term, more trade-school training and education, along with immigration reform, could provide more workers.

“Labor costs and shortages continue to be an issue,” Adlong said. “Many subcontractors are very busy and are not as eager to bid projects. Many materials and equipment have long lead times, and we have to take that into consideration as we are planning projects.”

Teeter said the labor situation has become another factor in a company’s operational plan. At least, it has become more predictable than the weather.

The “labor shortage is still a problem; it is becoming more predictable and manageable,” Teeter said. “We know the obstacle is that there just isn’t enough skilled labor. We know the sources we have, so there is a lot of emphasis on [asking], ‘How much labor can we draw for this?’

“Five or 10 years ago you didn’t put much emphasis on can I get enough labor. It was a given. There are a lot of checks and balances: Can the labor market produce what we need?”

While the supply chain issues of the post-pandemic world are clearing up, problems remain. Tate said his company recently completed an addition to a commercial building. The addition called for its own heating, ventilation and air-conditioning system, but the wait time for the equipment was so long that the customer is using its existing HVAC on the new addition.

Tate said his company would install the new HVAC whenever it finally shows up.

And don’t even get Tate started on cement. The Mississippi River’s falling water levels have increased the cost of barge traffic, but thankfully for Tate, the river seems to also be in recovery mode. “It’s silly stuff,” Tate said. “It’s silly stuff. The Mississippi River is down, so you can’t get cement downriver and it made cement [prices] go up 15%.

“The labor shortage is nothing new; we’ve had that for two or three years. The supply stuff has been kind of slow since COVID. It has made a difference. It makes it hard for you to have a deadline because you don’t know when you are going to get it.”

Adlong and Teeter both said that rising interest rates are a concern. Higher rates, which the U.S. Federal Reserve instituted to fight inflation, mean higher debt costs. “That doesn’t work for borrowing,” Teeter said. “That would kill projects.”

Adlong said that navigating an environment of rising interest rates was like waiting for the other shoe to drop and not knowing how hard it was going to hit when it did. “Demand is currently as high as it has ever been,” Adlong said. “With the economy and interest rates going up, you would think eventually that owners are going to rein things in and say, ‘Let’s just wait and see.’ We are definitely concerned long term about how that is going to affect it.”