It has been a long, eventful journey for Arlo Washington, taking him from a career as a barber to president of a credit union.

The steps he took, or mistook, along the way were all used for learning, though, and Washington is optimistic about his newest endeavor: the People Trust Credit Union. The credit union, entirely led by minorities, opened in December in a former Bank of America branch office on East Broadway Street in North Little Rock.

The credit union was accredited by the federal National Credit Union Administration in September but isn’t quite open for business. Washington said the nonprofit is accepting applications for membership in the credit union and expects to begin offering full banking services in March.

It has been a good start for Washington’s project, which is led by Washington and a five-member board of directors, all of whom are minorities. He said the credit union’s goal was to have 300 members in the first year, and Washington said he already had 225 commitments or applications.

“We saw that checking accounts were a barrier for folks who are unbanked to be able to access the financial system,” said Washington, 45. “We wanted to come up with a solution for our community. A lot of the community members are not able to access traditional loan products and services from the bank because they don’t have credit or collateral.”

The credit union’s chairman is 13-year banking veteran Keith Fountain, a former Regions Bank assistant vice president. Fountain said he was eager to join the credit union’s team because he has always had a passion for helping empower communities.

“I am a person who is for the people, and I am looking forward to the growth and how this is going to have such a great impact on the community,” Fountain said. “It will set the stage for other places for us to grow as a credit union because I know it’s needed. We are going to set the stage for something new, positive and great.”

Washington said the name of the credit union comes from his credibility as a business owner and entrepreneur in the capital city; he has run a similarly named nonprofit loan fund for the past decade.

The credit union will focus on low-income members in Pulaski and Saline counties, and Washington said he hopes to open a second location once the first is up and running. The goal, Washington said, is to improve the statistics of the unbanked among the poorer, mostly minority, people in the credit union’s coverage area.

According to the Federal Deposit Insurance Corp., 2.8% of households in the Little Rock Metropolitan Statistical Area are unbanked and another 17.2% are underbanked.

“The power of the credit union in the neighborhood does give that extra financial gain back but also helps them understand the need of the bank in the neighborhood,” Fountain said. “A lot of people are afraid of putting their money in the bank because of what we grew up hearing. This gives us that presence to show we’re here to help.”

Washington said too many poor people use reloadable cash cards and use banks for “glorified check cashing,” if at all. It is critical to bring banking services and education to those who don’t realize the benefits.

“How do you provide financial services to somebody who has experienced generational poverty?” Washington said. “They don’t understand what a grant is and a loan is. We’re working hard to reach communities, and getting them to open up and trust, we have so much work to do.

“We have to start with the milk and bring them to the cornbread.” 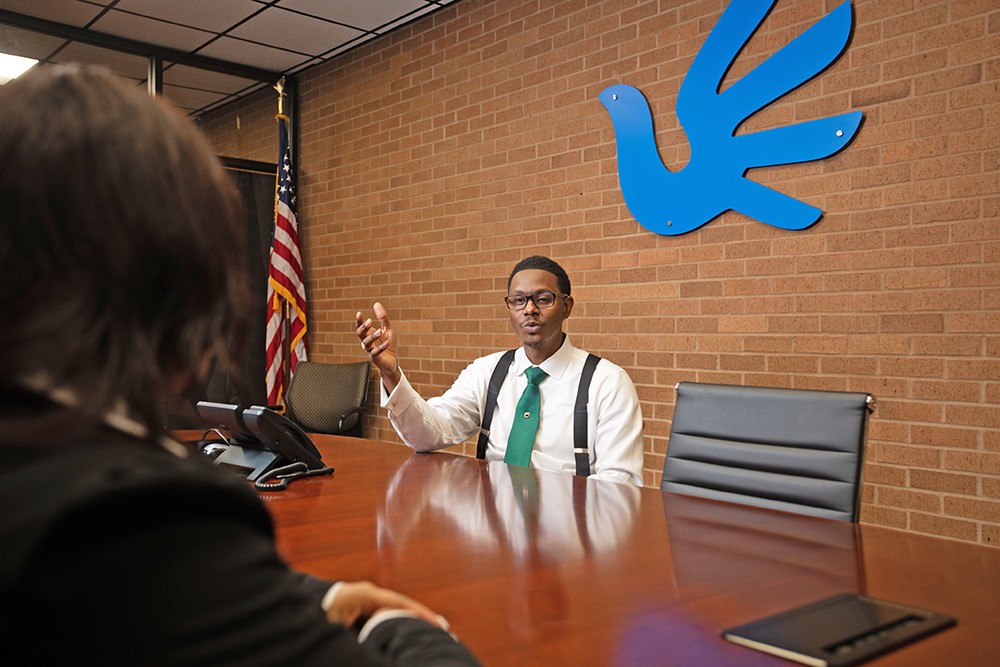 Arlo Washington, 45, says the credit union he founded sprang from interactions with his barber college students who didn’t understand financial tools. His team is expected to offer full financial services in March from its office in North Little Rock.

The idea of opening a credit union grew out of Washington’s own experiences and interactions with the community since the fateful day when he was a 19-year-old college student at the University of Arkansas at Little Rock. Washington was told he had a student loan refund and was handed a check for $1,700.

“I took the check, and I remember walking down the sidewalk and I was like ‘Man, this is all I got to my name. I need to do something,’” Washington said. “I didn’t have anybody to go to, so I took a chance. I took the refund money and opened up a barber shop.”

Washington’s barber shop debut reflected his hustling persona. He bought a chair from a fellow barber, acquired three mirrors from a “guy on the sidewalk,” and spent $120 on a countertop from Lowe’s.

His first barber shop had rudimentary tile flooring — “I had glue coming up for a year,” Washington said — and he obtained neon lights and signage on credit. It was a success.

“We used every dime, and we opened up shop,” Washington said. “We had good haircuts and good service, though. I had nine chairs within one year.”

But Washington has also faced trials and tribulations, something he believes gives him credibility in his community.

“I’ve been bankrupt, I’ve been foreclosed, I’ve been repossessed, I’ve been all of that,” Washington said. “Speaking from experience, I can tell a person how to regain their economic mobility once they have lost it.”

Washington’s next entrepreneurial stroke was to open up a barber school, aptly named the Washington Barber College, in 2008.

It was while running his school that Washington first began to realize that many of his students had very little in the way of financial acumen and even less access to financial resources.

The college was accredited as an occupational education institution in 2010 and was able to handle loans and Pell Grants provided by the Department of Education. Washington, though, wanted to make sure that his students were not only receiving loans but making the best use of them.

“We noticed that the students coming into the program lacked the financial tools they needed to go out and not go into default,” Washington said. “We didn’t want to be part of the problem; we wanted to be part of the solution. We wanted to provide financial education to our students on the front end, so when they get out there they could be profitable and sustainable and scalable.”

Washington then created the nonprofit People Trust Loan Fund, which started with a modest $1,000. Washington’s plan was to make a few small loans each month to members of the community, and then slowly grow the fund through fees and interest while helping the loan recipients build up their credit scores.

The fund was certified by the U.S. Department of the Treasury as a community development financial institution in 2016. Washington’s People Trust fund is sponsoring the credit union, although the two entities aren’t officially linked.

“I felt obligated as an entrepreneur to create something that would provide a solution for them,” Washington said. “[The barber school] being an anchor institution, people began knocking on our doors asking for money, and we emerged from that. We had a name people trust.”