by Capital Assets
Article sent successfully!
We were unable to send the article.

Little Rock is the capital of Arkansas and the global brand of a 12-county region, home to more than 1 million people living within a 50-mile radius of downtown.

I-40
(North Carolina to California)

I-30
(North Little Rock to Fort Worth)

Little Rock, “La Petit Roche,” got its name from the 1682 Robert La Salle expedition, when the party led by the French explorer landed on the south bank of the Arkansas River.

Little Rock became the seat of Arkansas’ new territorial government in 1821 and was incorporated as a city in 1831. It was named capital of the newly admitted State of Arkansas in 1836.

Centrally located with four distinct seasons, Little Rock has a daily mean temperature of 62.6 degrees and an annual precipitation of 49.6 inches.

Downtown, where the Southeast meets the Southwest and the Delta becomes the mountains, is 286 feet above sea level with some residential areas rising 300 to 630 feet.

*According to clintonairport.com: "Due to COVID-19, many routes and frequencies are not currently available." Generally, there are about 16 non-stop flights out of Little Rock's Clinton National Airport.

Established in 1959, the Little Rock Port Authority oversees the Port of Little Rock and intermodal transportation services connecting U.S. markets and the deep water ports of the Gulf of Mexico from Arkansas. 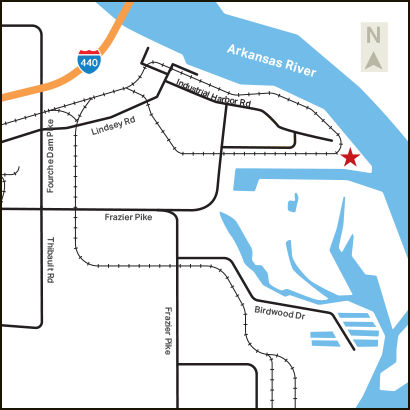 The Port of Arkansas is part of the McClellan-Kerr Arkansas River Navigation System, which runs from the Mississippi River northwest to just east of Tulsa.

Arkansas is one of only 24 states to have the unique resource of inland waterways and ranks third in the number of navigable waterway miles. The 448-mile system includes 18 locks, shipping 12 million tons annually with a cargo value of $3.9 billion.

• Home to more than 42 active businesses
• More than 7,000 jobs
• Includes 4,000-acre industrial park with ample levee-protected acreage available
• Three full-service river terminals, including a river port and slackwater harbor
• 10,000 railcars pass through the port yearly with service from Union Pacific and BNSF
• Located within 5 miles of I-40 and I-30
• Arkansas Freeport Law exempts inventory tax on raw materials, goods in progress and finished goods bound for out-of-state shipment

Metro Area by the Numbers

No. 11
Best Cities to Work From Home
smartasset.com

No. 12
Best Places to Live
Outside Magazine