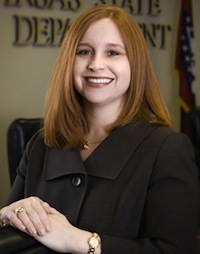 Susannah Marshall, 39
Deputy Commissioner
Arkansas State Bank Department
Little Rock
Susannah Marshall is a rarity: a bank regulator who didn't get lured away by a bank after a couple of years on the job.
Instead, she's been at the Arkansas State Bank Department since 1995 and has steadily worked her way up to deputy commissioner.
"I won't say I haven't been tempted, but I have never regretted staying with the agency," she said.
Marshall, a product of Newport, attended Hendrix College at Conway and then Arkansas State University at Jonesboro, working part time for the Worthen bank organization while earning an accounting degree in 1994.
By the time she joined the bank department the following spring, she had already worked part time for banks in Tuckerman, Newport and Jonesboro.
"I didn't wake up and think, 'I want to be a bank examiner.' But as I started at the agency and I started to work in the regulatory environment ... I realized the opportunity to help banks, to improve their condition, to help them operate in a safe and sound manner — there's a lot of satisfaction in that."
Marshall also finds satisfaction from serving on the board of directors of Trinity United Methodist Church's long-running Trinity Presents community outreach program.