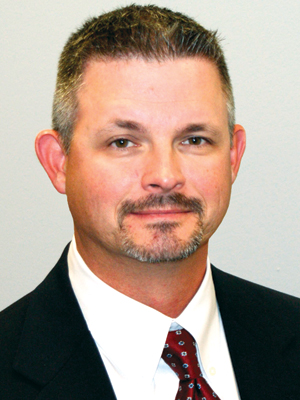 He credits his boss, Dan Horton, president of First National Bank, with giving him a chance and teaching him everything he knows about banking. Although, Lenderman said, he has always had a strong work ethic, it's essential in working for Horton.

Shortly after joining the bank, Lenderman became an integral player in merging the company's multiple banks and acquiring Heritage Capital Corp. in Jonesboro. Now, in addition to being CFO, he is the executive vice president of First National Security Co., which is nearing $1 billion in holdings.

Unfortunately, crunching numbers and setting rates can become kind of boring after awhile, Lenderman said, so for fun he enjoys hunting, golf and being outdoors.

You can also find him in the batter's box and on the sidelines coaching the First National Bank Lions, a children's fast-pitch softball team he has coached for about five years. Although he doesn’t have any children of his own, he said, he likes coaching his friends’ kids and has fond memories of playing the sport in Little League throughout his childhood and into high school.

He also serves on the board of the Montgomery County Athletic Association, where he is helping the association build a new athletic complex with a concession stand and that will eventually feature three ball fields.

Lenderman studied accounting at Arkansas Tech University at Russellville and attended the Southwestern Graduate School of Banking at Southern Methodist University in Dallas.