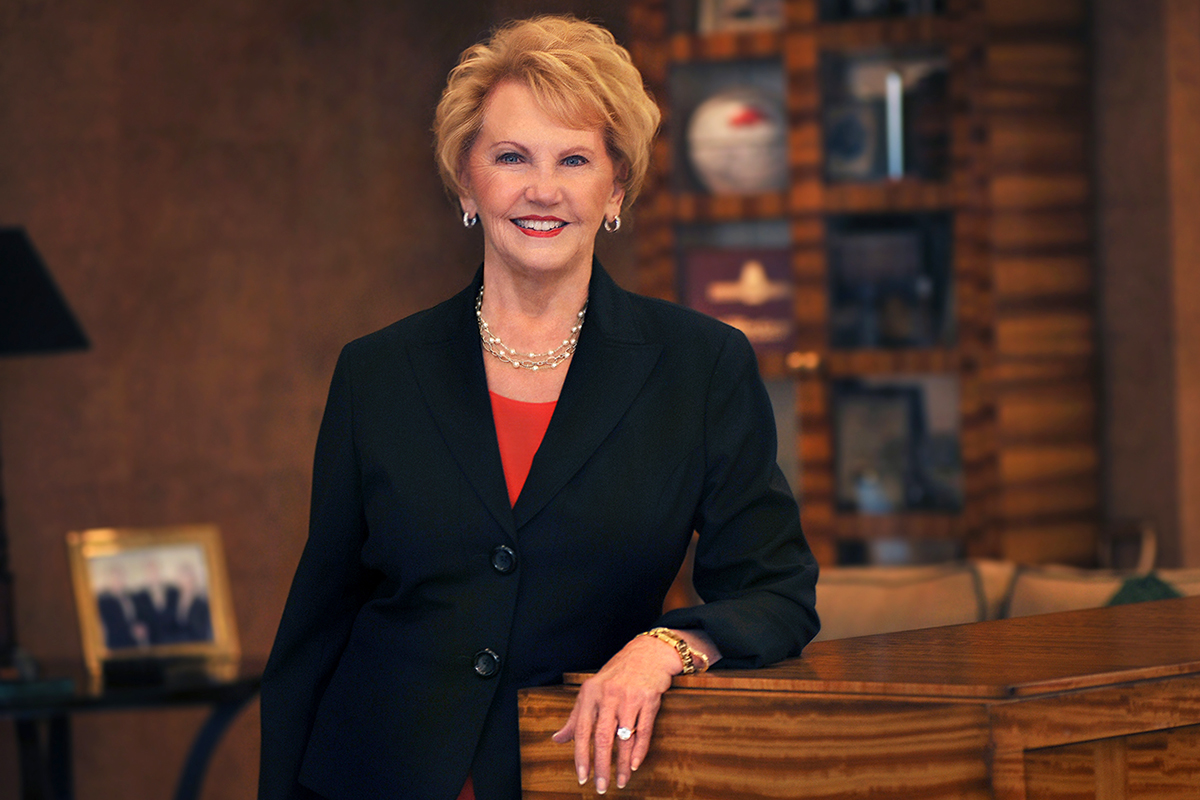 As a young bride-to-be, Johnelle DeBusk of Heber Springs looked forward to her future as a wife, homemaker and mother. She had no idea that her 54-year marriage to Johnnie Bryan Hunt would sweep her away to destinations undreamed and into roles unimagined as a business leader, billionaire and philanthropist.

The Cleburne County couple became a dynamic entrepreneurial team, iconic partners who persevered through tough times to co-found J.B. Hunt Transport Services Inc., one of the largest trucking companies in the world.

“We both are just so thankful for all the things that came our way,” Johnelle Hunt said. “We often would take each other’s hands while driving somewhere and say, ‘Why us?’

More than half a century down the road from its start with five trucks and seven trailers in 1969, the Lowell-headquartered J.B. Hunt Transport now numbers more than 29,000 employees and reports annual revenue topping $9 billion.

But maintaining profitability in the early years of the company was a constant struggle until the trucking industry was deregulated in 1980. At one point before that watershed event opened up competitive opportunities, the Hunts were nearly at wits’ end.

“We met on a Saturday about putting the trucking company into bankruptcy, but on Monday morning, we went back to work,” Johnelle Hunt said. “To this day, I can’t tell you what happened between Saturday and Monday.

“We had a lot of those times nobody knows about where you stay up all night trying to figure something out.”

During those trying times, investors and creditors kept working with the Hunts to keep the company moving forward. With financial backers hanging tough, Johnelle Hunt oversaw the assembly of a cadre of young, aggressive hires who were motivated and brought fresh ideas to the table.

“I really didn’t care if they had a degree or if they had a 4.0 grade-point average,” she said. “I’ve hired people because of how much they needed a job.”

The stage was set for the rise of J.B. Hunt Transport in northwest Arkansas in 1961, when the Hunts opened their first business in east Arkansas, bagging and selling rice-hull litter for a burgeoning poultry industry.

The trucking component of the J.B. Hunt Co. in Stuttgart provided the seed for bigger things involving transportation and the gateway for Johnelle Hunt to enter the business scene.

After selling their Little Rock home and plowing their equity into the venture, she was coaxed out of the house and into the office as part-time help. “Next thing, I’m full time,” Hunt said. “Johnnie said, ‘I need you here.’”

He was a truck driver who left school after the seventh grade to work, a forward-thinking optimist who didn’t like details. She is a detail-oriented pragmatist who dealt with whatever followed, who left college to marry the love of her life.

“He looked out the windshield, and I looked in the rearview mirror,” Johnelle Hunt said of their business relationship. “I was trying to hold it together.”

The poultry litter venture was the culmination of an idea her husband had 15 years earlier. The sensation that washed over Johnelle Hunt at the groundbreaking remains vivid to this day.

“I remember that head-to-my-toe feeling,” she said. “Oh my, his dream is finally coming true.”

After his death in 2006, Johnelle Hunt was pulled into completing his development dreams in Rogers through Hunt Ventures. The Rogers concern owns 1.5 million SF of commercial space and growing as well as a 50% stake in the 884,257-SF Pinnacle Hills Promenade.

Hunt likened naming her favorite philanthropic endeavor to picking a favorite grandchild. She enjoys every one of them.

“My mother and daddy were just good about helping people,” Hunt said of her family’s heritage of giving. “Your giving spirit comes from your past. I was fortunate in that I came from a family that believed in helping other people.”