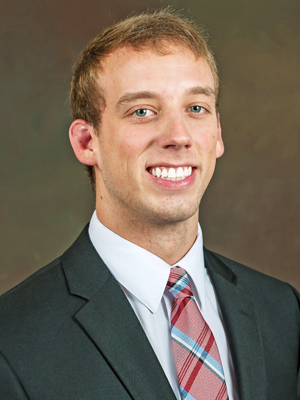 Jacob Robinson always wanted to be in the health care field.

thought he might go into patient care but realized that wasn’t his fit. Instead, Robinson decided to work on the business side of the industry.

After graduation, he started a one-year administrative fellowship at Baptist Health in Little Rock, where he quickly had an impact. He wrote a business plan that led to total joint surgeries being offered at the health system’s Stuttgart hospital.

Also during his fellowship, he helped open Baptist’s new 111-bed hospital in Conway. After that hospital opened last September, Robinson was named assistant administrator of the facility, which has about 400 employees.

He said that one day he would like to be the CEO of a health system.

Away from the hospital, Robinson is enrolled in the Conway Area Leadership Institute, which prepares future leaders to serve the Conway community.

Robinson said his job is rewarding. “I feel like I’m doing something meaningful,” he said. “I wake up, and I’m happy to do what I’m doing.”