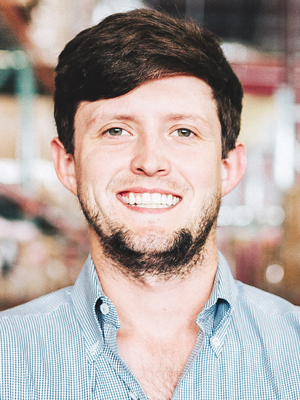 Lance Stokes doesn’t mind being in the shadows.

Stokes, who turned 30 after he was selected as an honoree, is married to Lauren Stokes, who began designing clothes while on pregnancy bed rest in 2013. Her designs turned into the Lauren James Co., which had revenue of more than $13 million in 2016, and Lance Stokes is the company’s COO and oversees execution and expansion plans.

Of course, when anyone discusses Lauren James, they want to talk about Lauren, his beautiful wife with the great backstory.

“When she’s successful, I’m successful. Besides, no one wants to see this guy anyway,” Stokes said. “I’m so happy that she has all the publicity, and that’s why I work every day to make sure that happens.”

Lance Stokes’ business training is vital to Lauren James’ success. He graduated from the University of Central Arkansas at Conway with a degree in business and ran two unsuccessful businesses before earning success with Lauren James.

“You will fail, as I have in the past,” Stokes said. “Everything I have done before Lauren James and now in Lauren James is trial and tribulation. You have to have the mentality to keep going. Your failures are your biggest opportunities.”