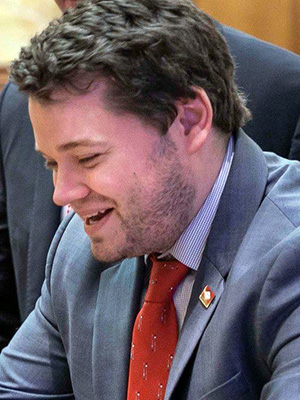 Aaron Pilkington followed his own advice when the chance to run for political office arose in 2016.

Pilkington was living in Clarksville and working as an administrator for Sparks Health System when Republican Party leaders began looking for someone to run for the District 69 seat. Pilkington had worked on campaigns in Pennsylvania and West Virginia before helping Tom Cotton win a U.S. Senate seat in 2014.

“It had crossed my mind,” Pilkington said. “People always asked me if it was something I was interested in. I didn’t think I would run this young in my life. I always thought if there was an opportunity to run and help out what you believe in, you need to be the person to step up.”

Pilkington won election in 2016 with 58% of the vote and was reelected by the same margin in 2018. He is considered one of the most conservative members of the state House but he said he is no “firebrand.”

Pilkington said that as the only legislator with a degree in health care administration and as one of only three who are younger than 30, he can provide a fresh look at different issues.

“Right now I just want to focus on doing the best for my district,” Pilkington said. “As a millennial legislator, I see a lot of issues [on which] my perspective can be very helpful.”