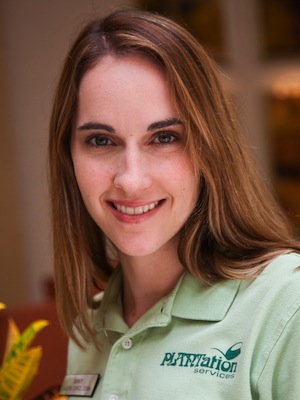 Growing up in central Louisiana, Connell worked in her high school’s greenhouses and took part in judging floriculture contests for the Louisiana association of Future Farmers of America chapters.

She knew she wanted to go into the plant industry, but wasn’t sure in what field. She wanted to avoid being outside with plants, however. “I have really bad allergies and the outside just kills me,” she said.

After graduating from Louisiana Tech University with degrees in plant science and agricultural business in 2005, she started looking for jobs in Little Rock and found Plantation Services Inc., which designs and cares for indoor plants. It also allows customers to lease the plants.

The job was perfect for her. Connell was hired in early 2006 and within the first six months was promoted to a management position.

When the business became available for sale, Connell bought it for an undisclosed price on July 1.

Plantation Services has about 450 customers in central Arkansas and 11 employees. Connell declined to release revenue figures.

She said she was motivated to provide “something that my customers see value in” and do the best job that she could. Outside of the business, Connell is the education chair of the Plantscape Industry Alliance. n